An international collaboration has developed a nanotechnology approach to stopping virus growth that may be used against COVID-19, as well as seasonal influenza and bird flu.

Budisa is a member of an international partnership led by German researchers that has developed a chemically engineered nanoparticle that literally takes the air to breathe away from influenza viruses. The team has found these nanoparticles are biodegradable, non-toxic, and not immunogenic in cell culture studies.

Budisa and other Manitoba researchers are working with researchers from the Leibniz Research Institute for Molecular Pharmacology (FMP), the Free University of Berlin (FU), the Humboldt University (HU), the Robert Koch Institute (RKI), and the Charité. This multidisciplinary team of researchers has succeeded to envelop flu viruses in a nanoparticle “scaffold” so that they cannot infect their host cells. This promising result has just been published in the scientific journal Nature Nanotechnology.

Budisa says the key to the discovery of the new influenza inhibitor was the collaboration of scientists from many disciplines including biologists, chemists, physicists, virologists, physicians, and imaging. Budisa’s team produced and engineered nanoparticles with synthetic biology that were then chemically modified by other team members. High-resolution electron microscopy and tomography images impressively show that the inhibitor completely encapsulates the virus. The team has even demonstrated this application’s therapeutic potential in human lung tissue; if tissue infected with flu viruses was treated with the synthetic phage capsid – the part of the virus that contains its genetic material – the influenza viruses could no longer multiply. 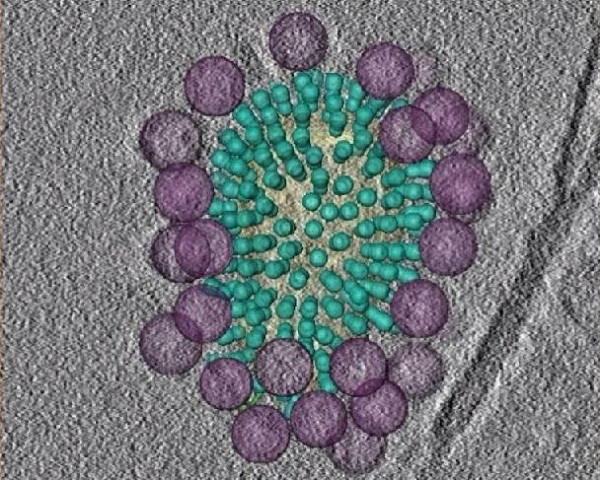 Nanoparticles (in purple) can suffocate virus cells (in blue) to prevent infection.

Budisa notes: “Further preclinical examinations must now follow, since it is not yet known whether the phage capsid provokes an immune response in mammals or whether repeated administration would lead to development of resistance towards flu viruses.”

He cautions: “There is still no proof that the inhibitor is also effective in humans. Therefore, therapeutic potential needs to be researched further.”

Influenza viruses are still extremely dangerous. According to estimates by the World Health Organization (WHO), up to 650,000 people worldwide die from the flu every year.

Budisa says: “Existing antiviral drugs are only partially effective because they only attack the flu virus when it has already infected the lung cells. It would be desirable and far more effective to prevent the infection from the outset.”

Read the original article on University of Manitoba.