Approximately, half of the world's nano-articles are annually published in Q1 journals. Although Singapore, the Netherlands, and Denmark publish a small number of articles in the field of nanotechnology each year, they enjoy a large share of published articles in Q1 journals.

There are numerous scientometric indicators that are employed to assess the quality of scientists, research centers, and journals achievements, measured and presented by various databases such as JCR and Scopus, among which the Quartile Score (QS), along with the Impact Factor (IF), is used to evaluate scientific journals.

QS is the performance score of a journal in its own category, each of which is rated between Q1 and Q4 based on its IF rating. Having a higher IF does not necessarily mean a high-quality journal because the maximum level of IF varies in every single category. Therefore, QS is known as a proper criterion for evaluating scientific journals and of course the articles published in the journals. Q1 indicates that the journal is at the top 25% of a category, and in many evaluations, Q1 and Q2 are generally considered to be highly cited and quality journals.

Statistical survey by Statnano on 2019’s nano-articles, using the Web of Science database, shows that around 52% of the indexed articles in the JCR were published in Q1 journals, where China, USA, South Korea, and Germany had the highest shares. Moreover, almost all of the top countries in publishing Q1 papers also excel in publishing nanoscience. 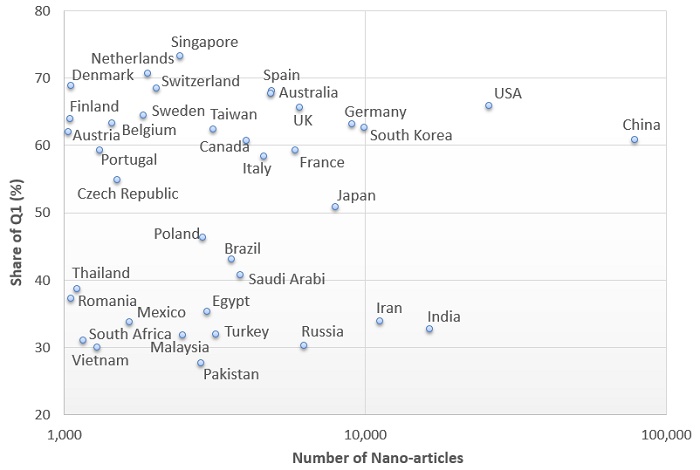 To check the situation of other countries, click here.