Skoltech researchers have investigated the procedure for catalyst delivery used in the most common method of carbon nanotube production, chemical vapor deposition (CVD), offering what they call a “simple and elegant” way to boost productivity and pave the way for cheaper and more accessible nanotube-based technology.

Single-walled carbon nanotubes (SWCNT), tiny rolled sheets of graphene with a thickness of just one atom, hold huge promise when it comes to applications in materials science and electronics. That is the reason why so much effort is focused on perfecting the synthesis of SWCNTs; from physical methods, such as using laser beams to ablate a graphite target, all the way to the most common CVD approach, when metal catalyst particles are used to “strip” a carbon-containing gas of its carbon and grow the nanotubes on these particles.

“The road from raw materials to carbon nanotubes requires a fine balance between dozens of reactor parameters. The formation of carbon nanotubes is a tricky and complex process that has been studied for a long time, but still keeps many secrets,” explains Albert Nasibulin, a professor at Skoltech and an adjunct professor at the Department of Chemistry and Materials Science, Aalto University School of Chemical Engineering. 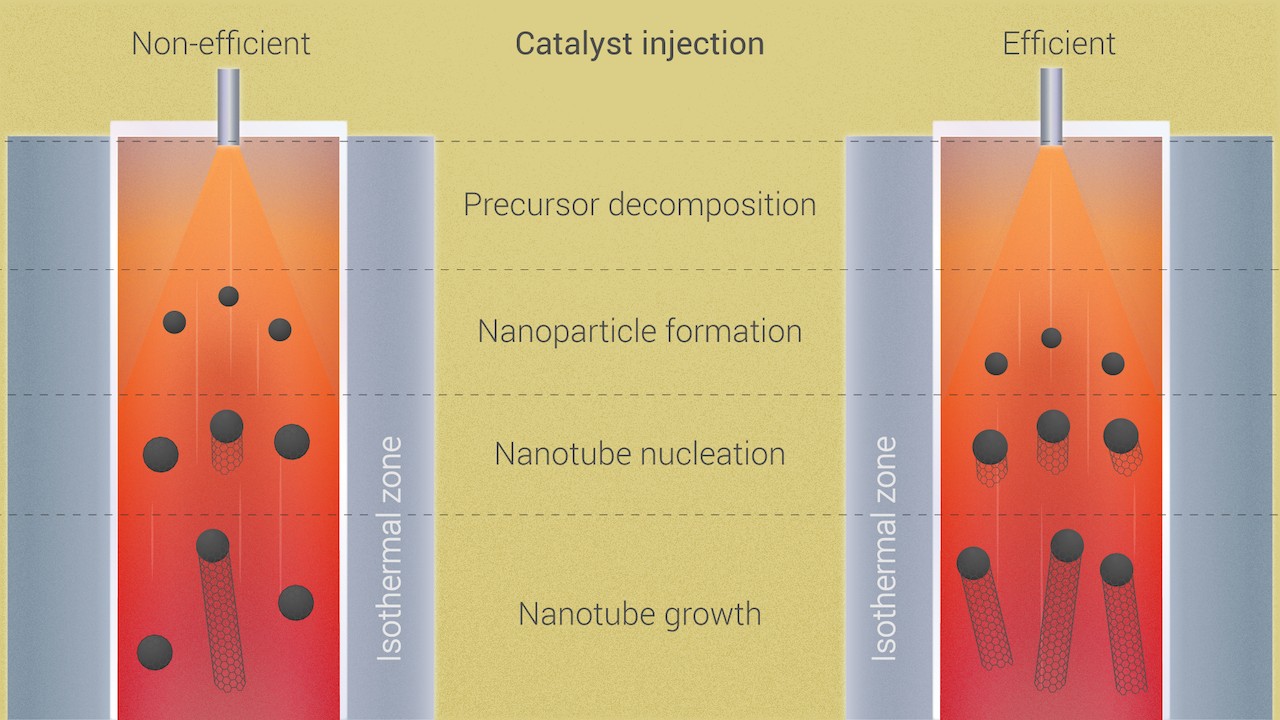 Various ways of enhancing catalyst activation, in order to produce more SWCNTs with the required properties, have already been suggested. Nasibulin and his colleagues focused on the injection procedure, namely on how to distribute ferrocene vapor (a commonly used catalyst precursor) within the reactor. The paper was published in the Chemical Engineering Journal.

They grew their carbon nanotubes using the aerosol CVD approach, using carbon monoxide as a source of carbon, and monitored the synthesis productivity and SWCNT characteristics (such as their diameter) depending on the rate of catalyst injection and the concentration of CO2 (used as an agent for fine-tuning). Ultimately the researchers concluded that “injector flow rate adjustment could lead to a 9-fold increase in the synthesis productivity while preserving most of the SWCNT characteristics”, such as their diameter, the share of defective nanotubes, and film conductivity.

“Every technology is always about efficiency. When it comes to CVD production of nanotubes, the efficiency of the catalyst is usually out of sight. However, we see a great opportunity there and this work is only a first step towards an efficient technology,” Dmitry Krasnikov, senior research scientist at Skoltech and co-author of the paper, says.