Once upon a time, there were two options for big-screen TVs. LED TVs (an LCD TV with an LED backlight) offered the best option for brightness and resolution, while video projectors were the clear answer for those who valued a truly big image size and the ability to control ambient light. But that was more than a decade ago and, boy, have times changed. Today, we have QLED TV, OLED TV, and mini-LED TV, (not to mention new laser-powered short-throw projectors). Within a few months, you can add MicroLED TV to that list.

But that’s just the start. Not far over the horizon are three more technologies that look poised to change the TV landscape even further: Work on QNED, QD-OLED, and QDEL displays is at various stages of development and we may see the first of these innovations within the next 12 months. What the heck do all of these acronyms mean, and more importantly, how are they going to affect your TV-buying decisions? Let’s analyze this alphabet soup and come up with some answers.

The oldest and most affordable of the TV technologies we have right now is LED TV. It’s a misnomer: Technically speaking, a true LED TV would use LEDs for all aspects of the image you see, but that’s not quite what’s going here. An LED TV is actually an LCD TV that uses LEDs as its light source, but doesn’t use them to produce the final image. That task falls to the LCD panel and a subsequent color filter. 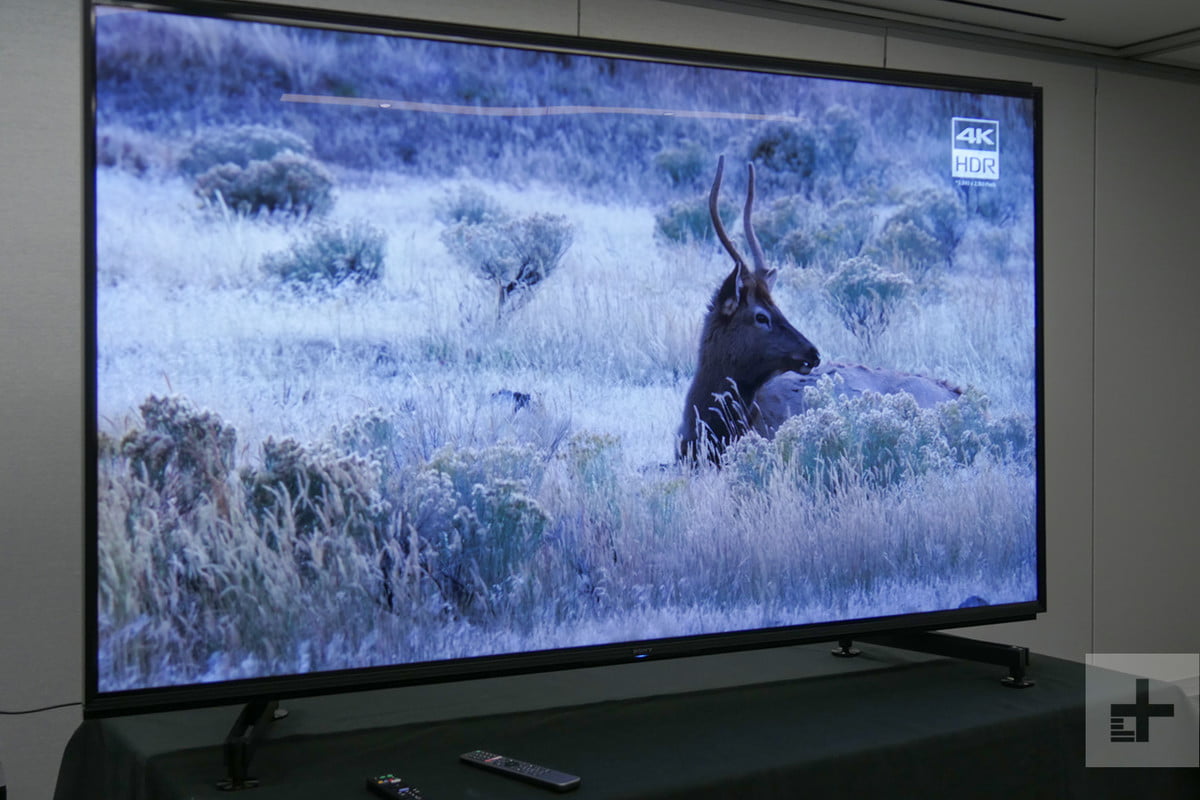 You can find LED TVs for as little as $85 during special promotions like Black Friday, which makes them highly attractive, but LED TV also have drawbacks. Their backlights consume a fair amount of energy. Their LCD panels are good at letting light through, but not as good at blocking it, which means blacks aren’t as deep or dark as they could be. Finally, the white light produced by the backlight isn’t a full-spectrum white, so some colors aren’t possible and others aren’t always accurate.

In the early 2010s, Sony, Samsung and several other companies began experimenting with a material known as quantum dots. These nanoparticle semiconductors were discovered to possess the intriguing quality of being able to emit very precise frequencies of light when stimulated with an energy source. They also proved to be extremely efficient at converting that energy into light. 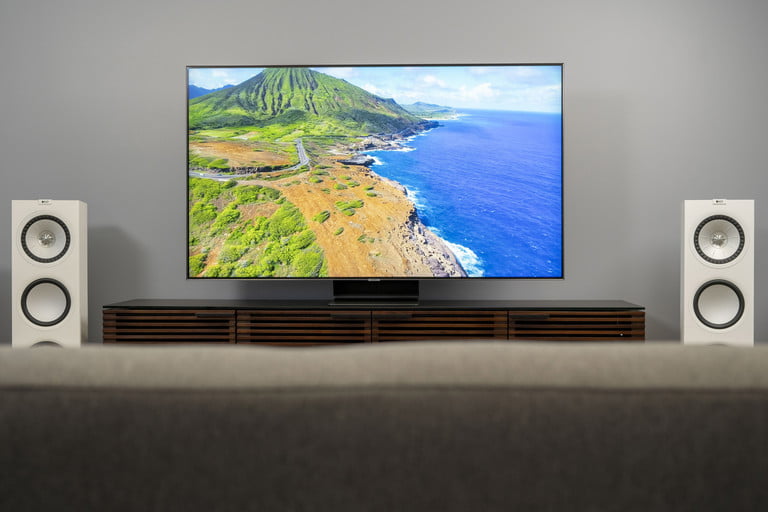 TV makers realized that by using a layer of finely tuned quantum dots on top of an LED backlight, they could fill in the parts of the color spectrum the LED was missing, thereby creating a very complete and pure white light. Best of all, doing so required virtually no extra energy, and the result was excellent brightness, color volume, and color accuracy. This was the birth of quantum dot LED (QLED), and it has become the display technology of choice for a wide variety of TVs, from inexpensive 50-inch 4K TVs all the way up to 98-inch 8K TVs. QLED TVs currently offer the best price-to-screen-size ratio of all panel-based TV technologies (projectors are still the cheapest way to get an ultra-large image).

But despite QLED TV’s vastly superior colors, they still depend on two variables to control contrast and black levels: Selective dimming of the backlight and the blocking of any remaining light with the LCD matrix. It’s not perfect: Many QLED TVs still end up with blacks that are actually very, very dark gray, and in scenes where very dark and very bright elements are on the screen at the same time, you get “blooming” — a slight halo of brightness that seeps into the dark areas of the image. 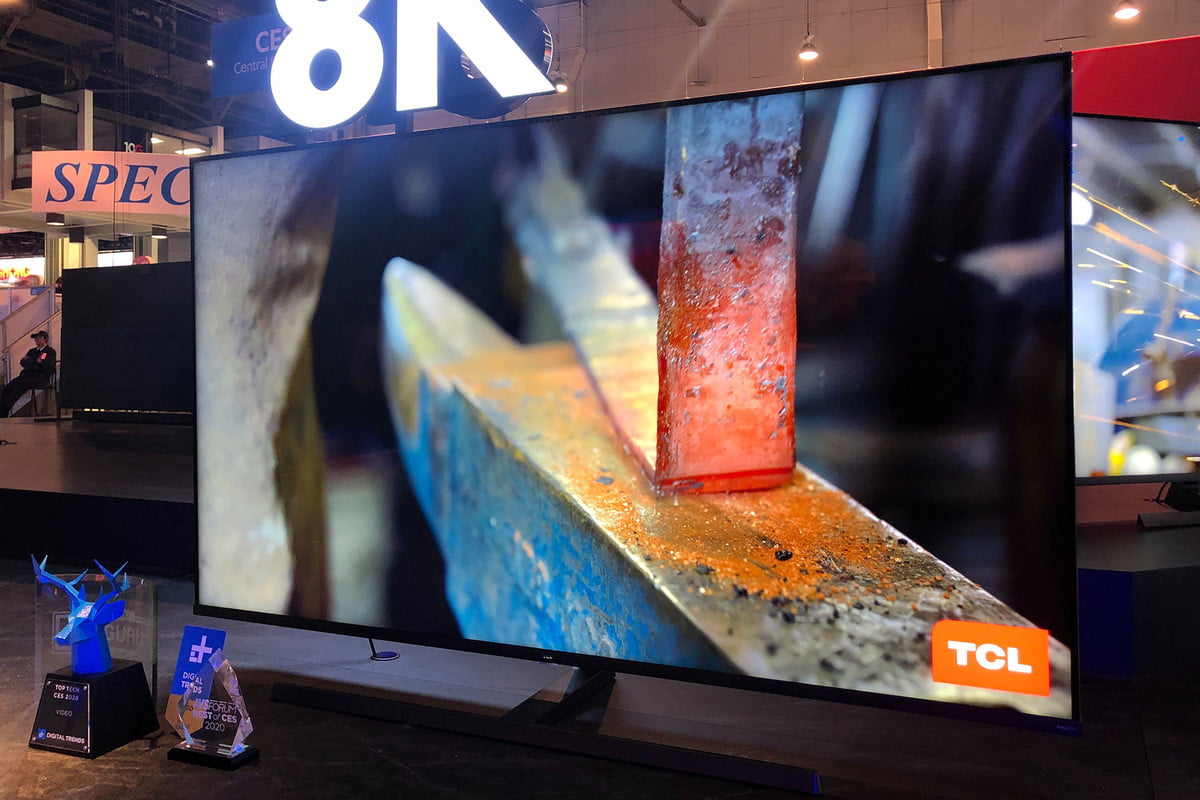 One way to solve QLED’s contrast problem is to exert even greater control over the LED backlight. A typical QLED TV backlight is made up of hundreds of individual LEDs, subdivided into dozens of zones. Shutting off every LED in a given zone produces a nice, deep black, but quite often the zones are just too big to do this without negatively affecting parts of the image.

Mini-LED TVs are an attempt to solve this problem by drastically increasing the number of LEDs in the backlight — with thousands of tiny LEDs instead of hundreds of larger ones. More and smaller LEDs means more and smaller zones, which as you’ve likely guessed, leads to even greater control over brightness (or darkness) across the screen. We’ve only seen a few Mini-LED TVs so far, but they’ve already proven that the strategy works. These TVs produce some of deepest blacks we’ve ever seen on an LED-backlit TV.

At the moment, TCL is the only TV brand selling Mini-LED TVs, but we expect virtually all brands that are still producing QLED-based TVs to sell mini-LED models in 2021.

What if you could just get rid of the backlight entirely, and have each pixel on a TV screen produce its own light and color? That’s exactly how organic LED (OLED) TVs work. Each OLED pixel is a self-contained light and color factory, which gives OLED TVs two distinct advantages. Without a separate backlight, they’re incredibly thin and can even be made into flexible, rollable sheets. No backlight also means perfect blacks. When an individual OLED pixel is shut off, it emits no light at all. It simply doesn’t get any darker than OLED right now. 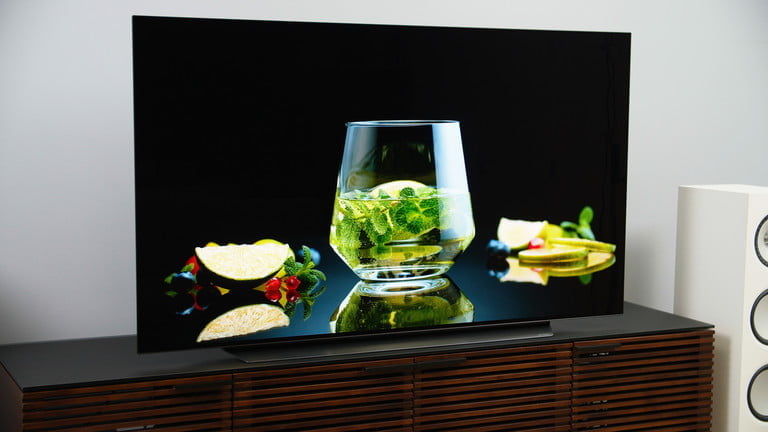 As spectacular as OLED TVs are, they can’t get as bright as QLED TVs and, in some situations, they can suffer from both image retention (seeing parts of a previous image temporarily stick around like a shadow) and burn-in (when image retention becomes permanent). That’s an unfortunate side effect of OLEDs: The brighter you make them (by running more current through them), the shorter their life span. OLED TVs also tend to be more expensive than QLED TVs. That’s partly because there are fewer companies that make OLED panels, and fewer companies that sell OLED TVs, but it’s also because the OLED manufacturing process is newer and more expensive than making QLED displays.

Samsung just announced that it will start selling the first consumer-targeted TVs made from MicroLED technology, which it had previously only used in high-end commercial installations. MicroLED TVs use the same principle as OLED, inasmuch as each MicroLED pixel produces both light and color, but without the need of a backlight.

Because these pixels use tiny LEDs, not OLEDs, they can achieve impressive levels of brightness, perfect levels of black, and they never suffer from burn-in because LEDs aren’t affected by this problem. It sounds like the best of both worlds, and it almost is. However, current MicroLED displays do have some drawbacks. 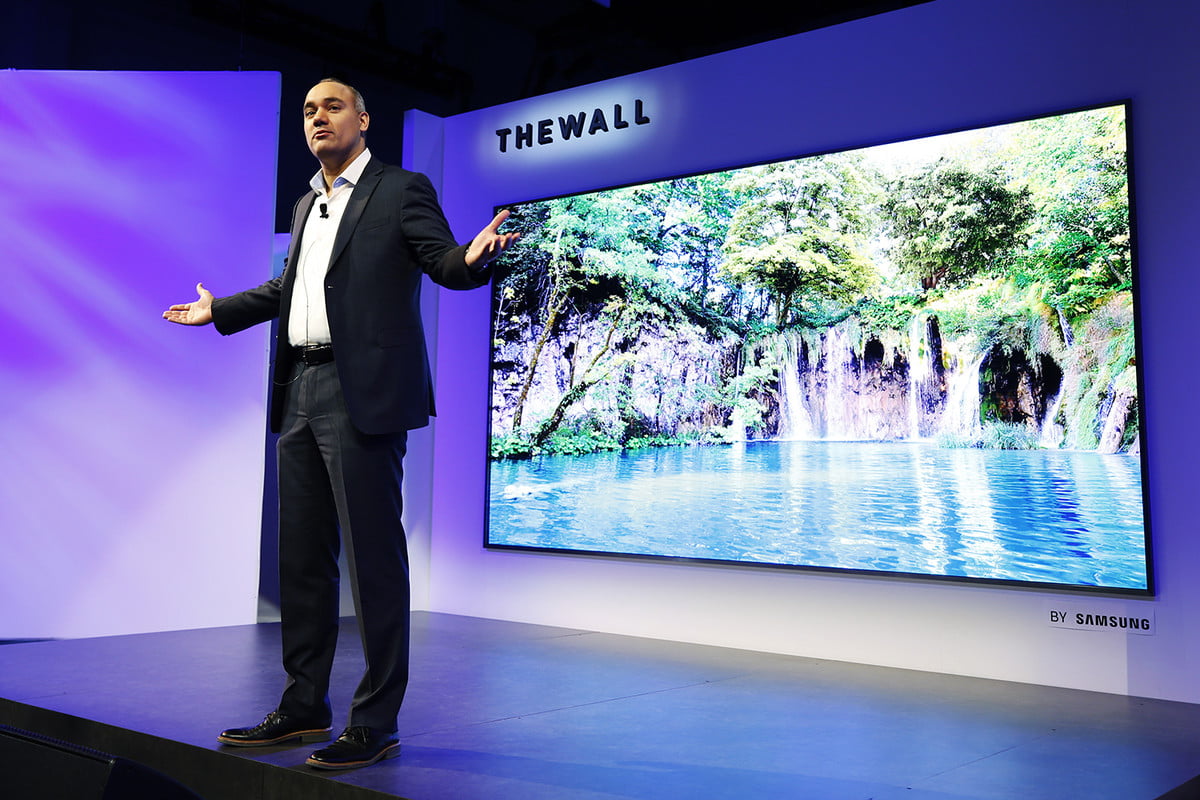 As small as these LEDs are, they can’t get as small as OLEDs. That means that for any given size of TV, you can fit way more OLEDs than MicroLEDs, which is why Samsung’s first MicroLED may be a whopping 110-inches, but it’s still only a 4K TV. The bigger the screen, the more visible the pixels at the same resolution.

There’s also some question as to MicroLED’s energy consumption. When we’ve been allowed to get close to MicroLED TVs at places like CES 2020, the heat being generated by these displays was palpable. We don’t know if Samsung’s 110-inch version suffers from the same problem. Finally, there’s the price: As the newest of the current TV display technologies, expect MicroLED to be very expensive until demand drives the price down.

As intriguing as MicroLED technology is for ultra-large-size TVs, most folks would have trouble just finding a spot for one of these behemoths — that is, if they could even afford one. As such, we’re unlikely to see a MicroLED takeover of TVs 75 inches in size or smaller. But that doesn’t mean we’re stuck with our existing technologies.

Quantum dot OLED (QD-OLED) is a new way of manufacturing OLED display panels that helps to address two potential weaknesses of current OLED TVs: Their maximum brightness and their color volume and accuracy.

By reengineering the way OLED pixels produce color — with a little help from quantum dots — QD-OLED TVs eliminate the need for a color filter, which can absorb as much as 70% of the light that passes through it. This one change has the potential to significantly increase the amount of light that can reach viewers, without compromising color. It might also help to reduce or eliminate the threat of burn-in.

That’s the promise of quantum nano emitting diodes (QNED). At the moment, most OLED TVs use blue OLED material as their primary light source. That blue light can be swung toward white with the use of yellow OLED material, and then converted into all colors of the rainbow with a color filter, but this isn’t a great solution for either brightness or color accuracy, despite OLED TV’s impressive overall picture quality. 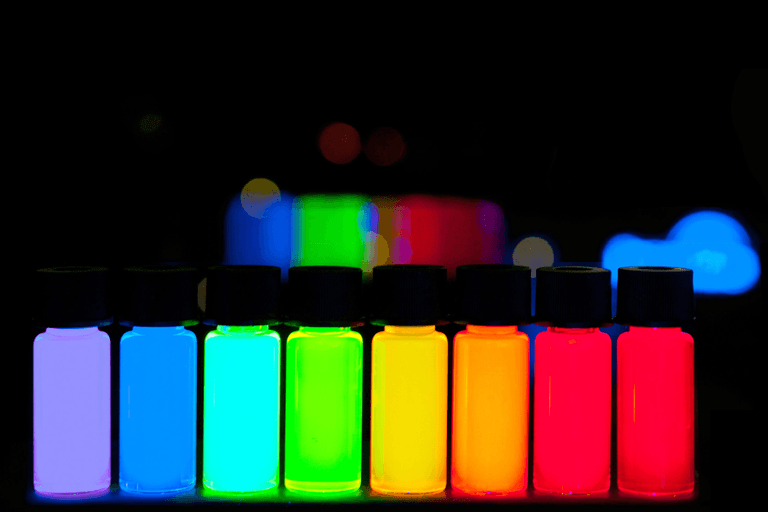 QD-OLED TVs, as we mentioned above, eliminate the color filter, but they don’t change the fundamental engine of brightness, which is still blue OLED material.

A QNED TV replaces that OLED material with a relatively new invention called nanorods LEDs. Nanorods are incredibly small, cylindrical structures that can be used to house equally small LEDs. The multifaceted shape of the nanorods increases the amount of light that the LEDs can emit, and their tiny size could be boon for ultra-high resolutions that go well beyond 8K.

At the moment, the belief is that TV makers will still rely on blue light from these nanorod LEDs as the base source of luminance, with quantum dots continuing to convert the blue LED light into reds and greens — just like in a QD-OLED TV. But because LEDs aren’t susceptible to burn-in, there’s no downside to pushing the maximum amount of current possible, in order to achieve maximum brightness.

Remarkably, these improvements might also come with reduced costs. OLED material is difficult to work with and even the most advanced manufacturing techniques still see panel yields that are lower than with QLED TVs. Replacing OLED with nanorod LED could be a big cost savings — if it works.

Reports from earlier in 2020 suggest that Samsung Display is investigating ways to replace blue OLED in its QD-OLED panels with blue nanorod LEDs, which would lead to the first QNED TVs being sold — possibly as early as 2022.

Quantum dots are currently used to convert one wavelength of light into another, with almost no loss of luminance. That’s why they’re showing up in QLED, QD-OLED, and QNED displays. But quantum dots aren’t restricted to this middle-man role. They can also be energized directly using electricity. This is known as electroluminescence, and it’s the basis of quantum dot electroluminescent (QDEL) technology.

Instead of using red- and green-tuned quantum dots to convert blue light, QDEL displays use three quantum dots per pixel — red, green, and blue — which are powered directly using electricity. The result is a display that, on paper, could be the holy grail of TV technology. 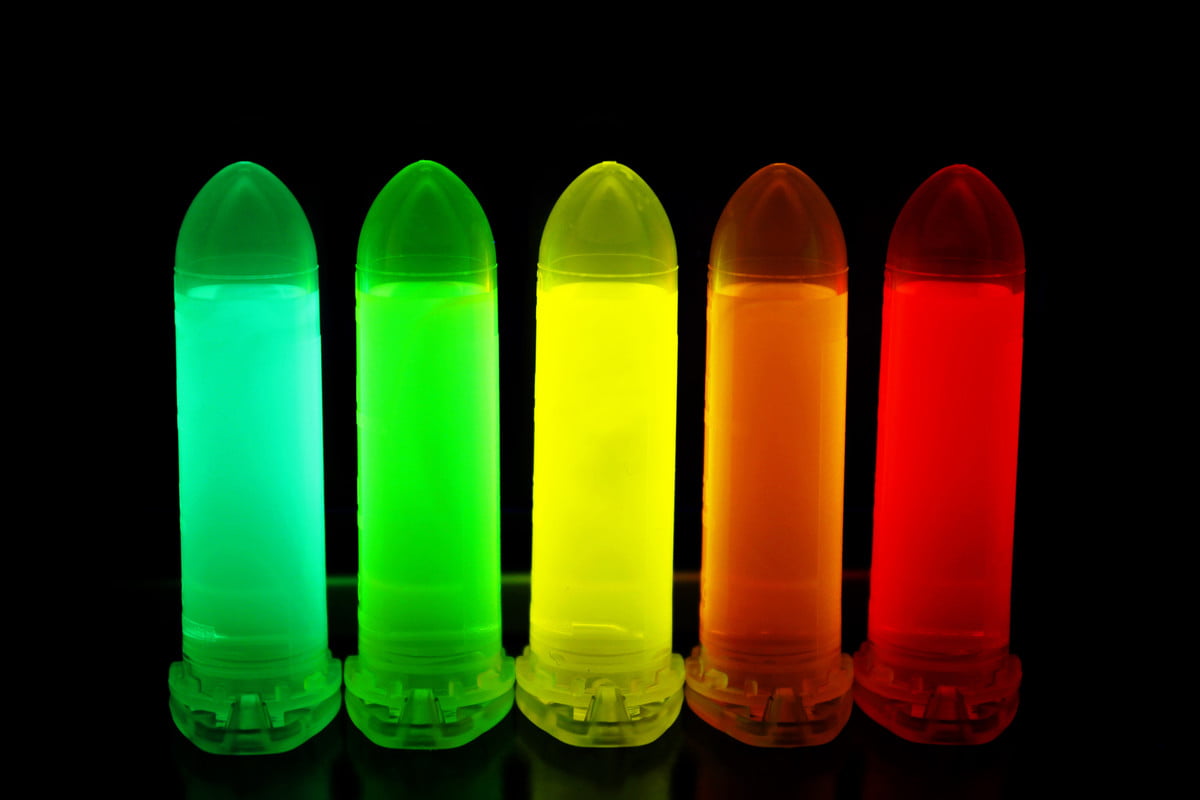 Each pixel is self-emissive, so just like with OLED-based displays, you get perfect blacks. Quantum dots decay over time, but just like LED-based displays, there’s no risk of burn-in. No color filter means that virtually all of the light generated passes through to the viewer unimpeded, giving you more brightness per watt of energy. And quantum dots can be applied in extremely thin layers, which preserves all of the flexibility of OLED, something MicroLED can’t currently do.