A team led by Rice University chemists Christy Landes and Stephan Link, both associated with the Smalley-Curl Institute, have made hybrid particles that combine the unbeatable light-harvesting properties of plasmonic nanoparticles with the flexibility of catalytic polymer coatings. Their work could help power long-pursued plasmonic applications in electronics, imaging, sensing and medicine.

Plasmons are the detectable ripples of energy created on the surface of some metals when excited by light or other input. Nanoantennas are microscopic bits of these metals, like gold, silver and aluminum. Because they are sensitive to specific inputs depending on their size, shape and type, they are tunable and therefore useful as sensors, bioimaging agents and even as therapeutics.

The goal of lead authors Emily Searles, a chemistry graduate student, and Sean Collins, a former Carl and Lillian Illig Postdoctoral Fellow at Rice, was to create hybrid nanoantennas with maximum energy transfer from their metal cores to a polymer coating. 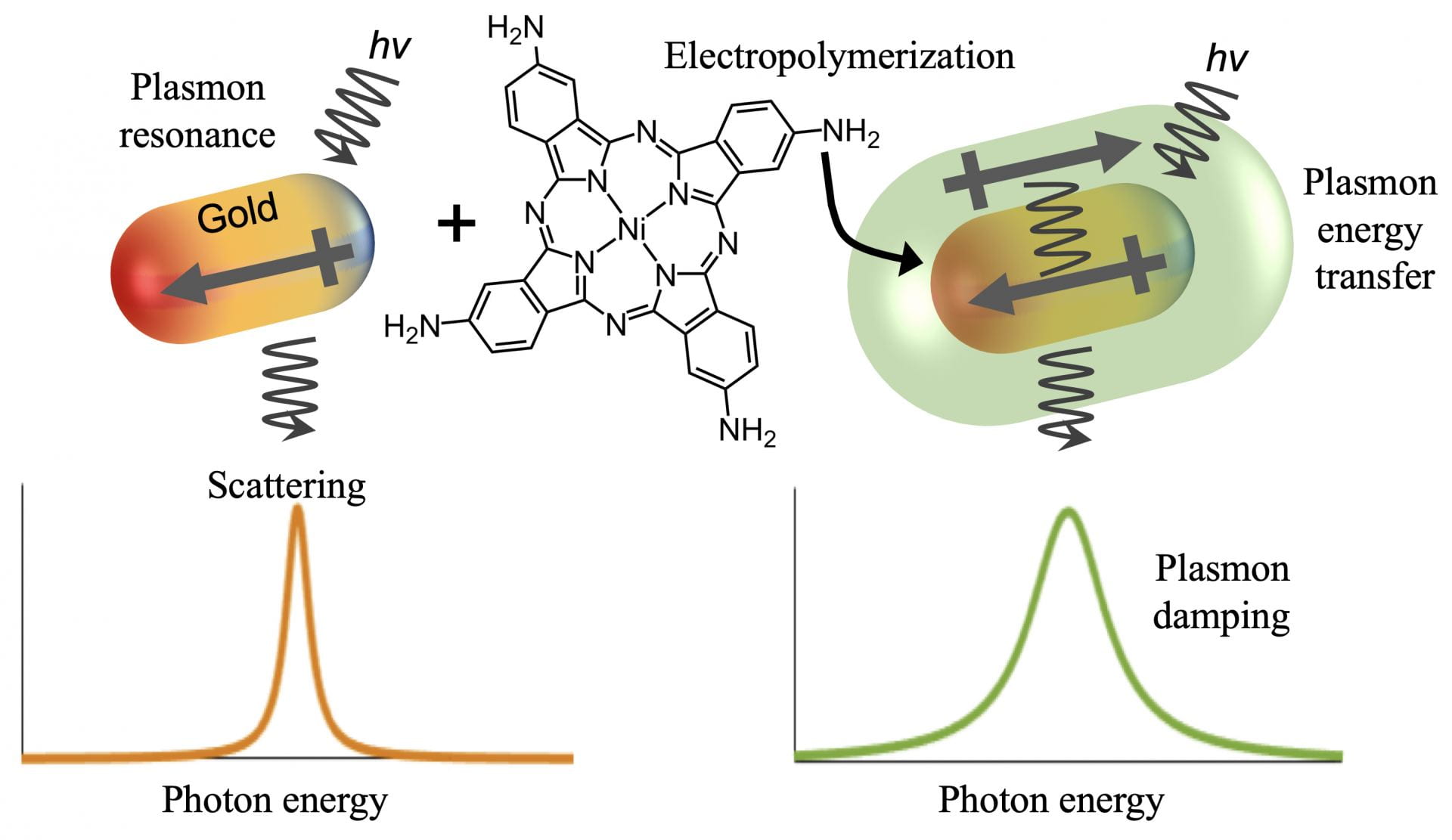 Rice University scientists coupled gold nanoparticles with soft polymers that pull energy from the gold’s plasmonic response to light. That energy can then be used to potentially catalyze chemical reactions.

They found a way to coat gold nanoparticles on an electrochemical support with a light-sensitive, nickel-based polymer. When triggered by light, energy from the gold’s plasmons flows into the coating while the applied potential in the electrochemical cell induces new polymerization from monomers in solution, doubling the coating size. The resulting hybrid damps light scattering from the plasmons by transferring energy into the polymer shell.

“The hope is that because we have put the energy in the polymer, we can now harness that energy to react with other molecules on the surface of the soft interface,” Searles said. “There are no reactions included in this paper, but that’s where we want to go.”

The gold-polymer particles studied measured about 35-by-85 nanometers before polymerization and twice that after. At their peak in experiments and simulations, they delivered 50% efficiency in transferring energy from the nanoparticle to the coating, 20% better than the previous benchmark.

The researchers knew of two possible paths for transferring the light energy between metals and the polymer coating: charge and resonant energy transfer.

“Second, charge transfer usually requires a sacrificial counterreaction or the catalyst is poisoned over time,” he said. “These energy transfer-based hybrids eliminate the need for a sacrificial reaction because both electron and hole transfer occur simultaneously.”

The first challenge was figuring out which polymer was best for getting energy from here to there.

“The nanoantennas and the polymer look very similar if you simply measure the light spectrum they absorb,” said Collins, now a lithography process engineer at Intel. “However, they are actually absorbing the light in completely different ways and the trick is getting those two mechanisms to work together. The nanoantenna casts a huge net to pull light energy in and shares most of the catch to the hungry polymer, giving the polymer far more energy than it could ever harvest alone.”

The team determined the plasmonic resonance dipole in the gold and the electric dipole transitions in the nickel polymer aligned when triggered with light, providing a path for charge carriers to migrate from the polymer.

“The energy in the polymer dissipates after a while, but it doesn’t appear to return to the gold,” Searles said.

The polymer coating does reach a point of diminishing returns, she said. “We found there’s a kind of a happy place where you’re not going to see any more energy transfer,” Searles said. “The polymer you’re adding is too far away from the nanoparticle.”

All the variables between light input, nanoparticle configuration and polymer will keep Searles busy for years as she researches practical applications.

“The goal is to be able to create a library of these systems,” she said. “Depending on the application, we want to shift the spectrum to have the highest energy efficiency. There’s a lot of different things to tune, for sure.”

Landes emphasized the importance of a collaborative team as well as the ability to combine new imaging and spectroscopy tools to the project.

“If we hope to harness the potential of novel nanomaterials in future applications, it is crucial to understand how such fundamental processes as energy transfer drive their materials properties at the nano- and macroscales,” she said. “Such efforts are bigger than can be accomplished by a single method or a single lab.”