Rechargeable batteries like lithium-ion batteries (LIBs) are seeing a surge in demand as technologies like electric propulsion ships and other vehicles become increasingly popular. However, lithium is costly, which has driven the search for other options. Sodium-ion batteries (SIBs) are a more sustainable alternative but are thermodynamically unstable with graphite―the usual anode material. Now, researchers in Korea have developed a “heteroatom-doped” (modified) carbon-based anode that helps SIBs to surpass the performance of LIBs. 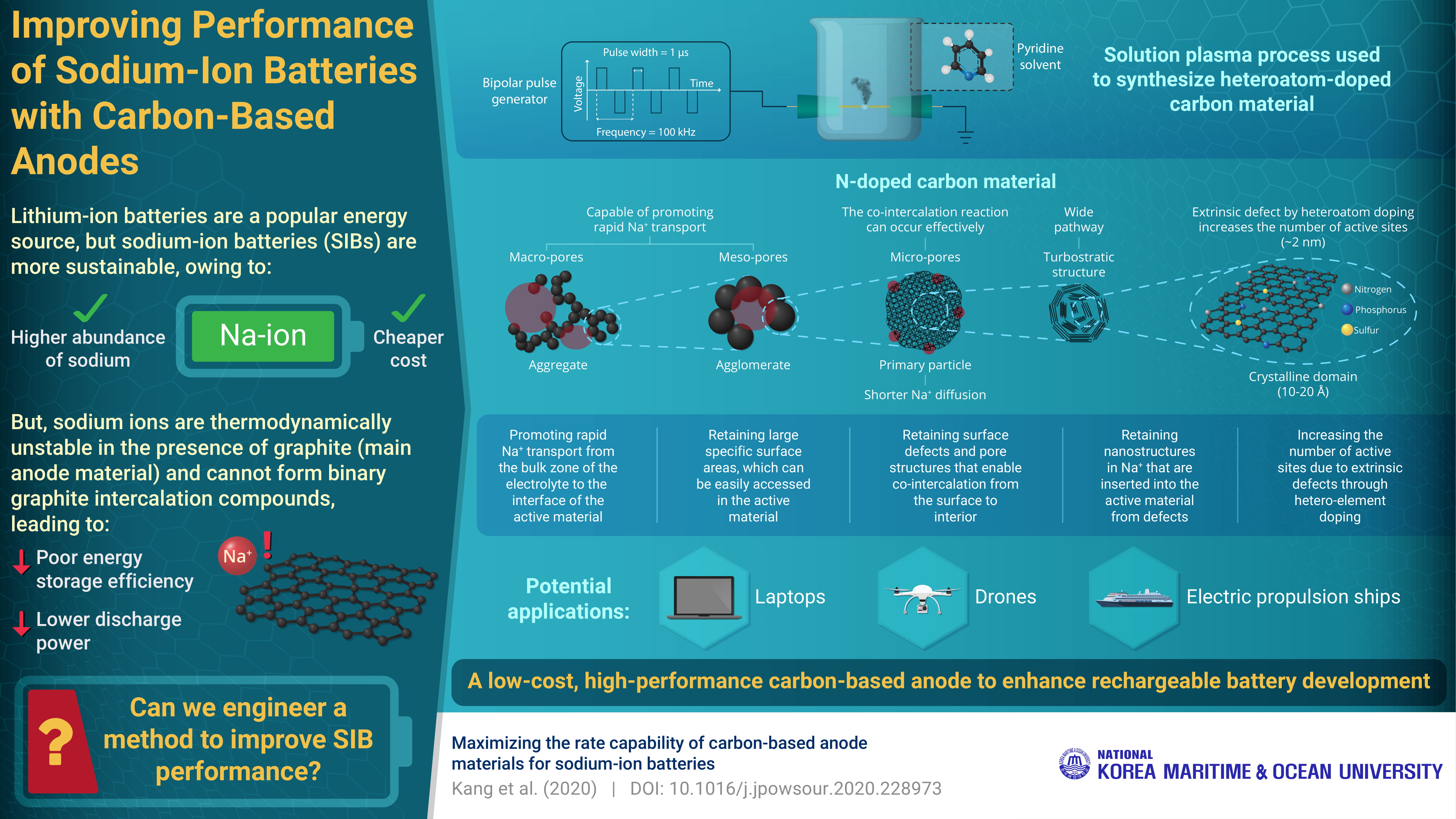 As the world becomes aware of the imminent environmental crisis, scientists have begun a search for sustainable energy sources. Rechargeable batteries like lithium-ion batteries are seeing a popularity surge, concurrent with production of “greener” technologies such as electric propulsion ships (which are being developed to meet the environmental regulations by the International Maritime Organization) and other electric vehicles. But, lithium is rare and difficult to distribute, putting its sustainability in doubt while also risking sharp increases in cost. Researchers have thus turned to “sodium-ion batteries” (SIBs), which are electrochemically similar to lithium-ion batteries and offer advantages like higher abundance of sodium and cheaper production. However, currently, the standard anode material in SIBs is graphite, which is thermodynamically unstable with sodium ions and leads to lower “reversible capacity” (a measure of its storage) and poor performance.

To this end, researchers at Korea Maritime and Ocean University, Korea, set out to find a suitable non-graphite anode material for SIBs. Dr Jun Kang, the lead scientist, says, “Because SIBs have low performance―only 1/10th the capacity of a lithium-ion battery―it is crucial to find an efficient anode that retains graphite’s low cost and stability.”

Now, in their latest study published in the Journal of Power Sources, the scientists reported the following strategies to overcome the limitations of carbon-based anode materials for SIBs: (1) Employing a hierarchical porous structure capable of promoting rapid Na+ transport from the bulk zone of the electrolyte to the interface of the active material; (2) retaining large specific surface areas where Na+ mi- grates to the interface, which can be easily accessed in the active material; (3) retaining surface defects and pore structures that enable co-intercalation from the surface to the interior; (4) retaining nanostructures in Na+ inserted into the active material from defects and pores that can have short diffusion paths; and (5) increasing the number of active sites due to extrinsic defects that result from these elements through hetero-element doping. These strategies led to the electrochemical performance of the battery being significantly improved, even surpassing that of current lithium-ion batteries!

In two of their previous studies, they successfully tested this method using phosphorus and sulfur, which were featured on the cover pages of Carbon and ACS Applied Materials & Interfaces, respectively.

Dr Kang is optimistic about the various potential applications of their technology, such as in electric propulsion ships and other vehicles, drones, and even high-performance CPUs. “These five factors afford good capacity retention, reversible capacity, ultrahigh cycling stability, high initial coulombic efficiency (80%), and remarkable rate capability. This means they can be used for a long time even with intense battery use,” he explains.

Considering the advantages of sodium over lithium, these findings certainly have important implications for the engineering of sustainable, inexpensive, high-performance batteries and can take us a step closer to the realization of an energy-efficient future.