Many life-threatening medical conditions, such as sepsis, which is triggered by blood-borne pathogens, cannot be detected accurately and quickly enough to initiate the right course of treatment. In patients who suffer infection by an unknown pathogen that then progresses to overt sepsis, every additional hour that an effective antibiotic cannot be administered significantly increases the mortality rate, so time is of the utmost essence.

The challenge with rapidly diagnosing sepsis stems from the fact that measuring only one biomarker often does not allow a clear-cut diagnosis. Engineers have struggled for decades to simultaneously quantify multiple biomarkers in whole blood with high specificity and sensitivity for point-of-care (POC) diagnostic applications, as this would avoid time-consuming and costly blood processing steps in which informative biomarker molecules could potentially be lost. 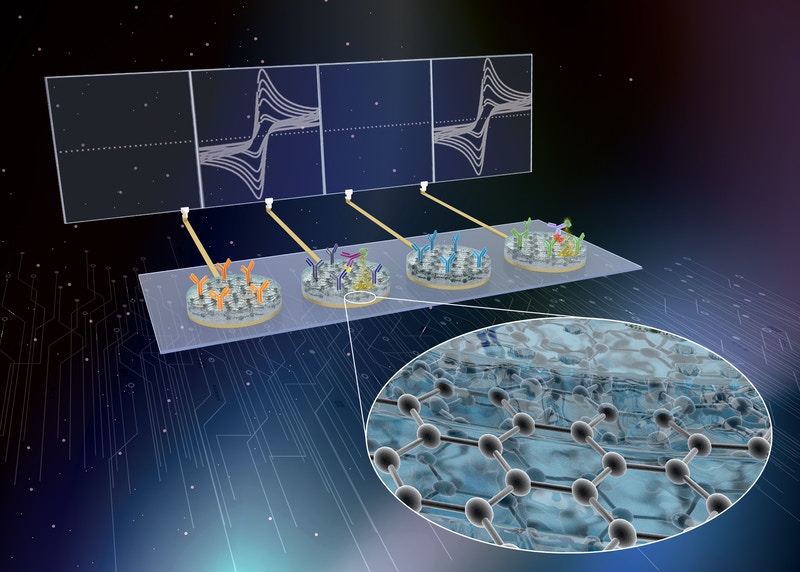 “In this study, we have taken an important step towards deploying our electrochemical sensor platform in clinical settings for fast and sensitive detection of multiple analytes in human whole blood. As the nanocomposite coating we developed here is inexpensive, it has the potential to revolutionize point-of-care diagnostics not only to test for sepsis biomarkers, but a much broader range of biomarkers that can be multiplexed in sets to report on the states of many diseases and conditions,” said Ingber, who also is a lead of the Wyss Institute’s Bioinspired Therapeutics and Diagnostics Platform, and the Judah Folkman Professor of Vascular Biology at Harvard Medical School and Boston Children’s Hospital, and Professor of Bioengineering at the Harvard John A. Paulson School of Engineering and Applied Sciences.

Ingber, Jolly, and their Wyss team are currently also developing eRapid electrochemical sensors with the newly engineered graphene-based nanocomposite coating as a critical component of a point-of-care diagnostic for COVID-19, traumatic brain injury, myocardial infarction, and many other disorders.

By developing their electrochemical sepsis-sensing technology, Ingber’s team built on earlier work published in Nature Nanotechnology, in which they had solved the problem of “biofouling” of electro-chemical sensing elements with their eRapid technology. In theory, electrochemical biosensors would be preferred for many clinical applications because of their ability to quantify the content of biological samples by directly converting the binding event of a biomarker to an electronic signal, their low power consumption and cost, and easy integration with diagnostic readers. However, especially when using whole blood, many blood components nonspecifically bind to the surface coatings of the sensors’ electrodes and lead to their degradation, as well as electric noise in the form of false signals.

The team’s eRapid technology uses a novel antifouling nanocomposite coating for electrodes to which binding reagents are attached that capture biomarker molecules from small quantities of blood and other complex biological fluids. Upon chemically detecting any one of these biomarker molecules with high sensitivity and selectivity, the eRapid platform generates an electrical signal at the electrodes that correlates in strength with the levels of target molecules that are detected. The initial nanocomposite coating allowed excellent conversion of chemical to electrical signals, and relied on tiny electrically conductive gold nanowires that were embedded in a matrix of a crosslinked protein known as bovine serum albumin. However, the high costs of the gold materials had been the major barrier to commercializing eRapid for clinical applications. 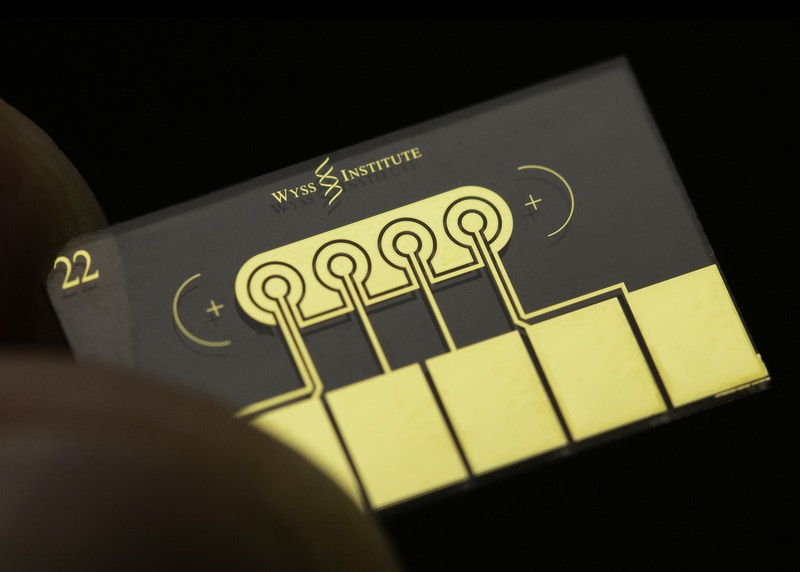 A novel antifouling nanocomposite coating covers the electrodes on eRapid chips, which uses graphene-oxide nanoflakes to conduct electricity and has binding reagents for sepsis biomarkers embedded into it. Coupled with additional surface chemistry this enables the conversion of a biomarker binding event to an electrical signal that correlates in strength with the levels of target biomarkers detected.

“In our advanced eRapid version, we replaced the coating’s gold nanowires with graphene oxide nanoflakes that also have anti-fouling and electrochemical properties, but they are much less expensive and allow even more sensitive measurements. In fact, the costs of fabricating the nanocomposite were reduced to a fraction of its original cost, which together with the sensing technology’s speed, efficiency, and versatility should enable the eRapid platform to have immediate commercial impact,” said Jolly.

After optimizing and characterizing their nanocomposite coating in binding assays for the inflammatory cytokine interleukin 6, the team applied it to the diagnosis of sepsis. Essentially, by attaching an antibody molecule to the coating that binds procalcitonin (PCT), and adding a second PCT-specific antibody to the complex that is linked to an enzyme, a precipitate is formed from a chemical substrate and deposited on the coating. This changes the current of electrons reaching the electrode, and helps register the PCT binding event as an electronic signal.

“We demonstrated that this electrochemical sensor element can detect PCT with high accuracy in whole blood, and validated it by quantifying PCT levels in 21 clinical samples, directly comparing it with a conventional ELISA assay – with excellent correlation,” said first-author Uroš Zupančič, who was a visiting scholar in Ingber’s group from the University of Bath. Zupančič is a Ph.D. candidate mentored by the study’s co-authors Despina Moschou, Ph.D., a Lecturer at the University of Bath, and Pedro Estrela, Ph.D., Associate professor and the head of the Centre for Biosensors, Bioelectronics and Biodevices at the University.

The team then extended their approach to simultaneously detecting multiple sepsis biomarkers by also designing sensor elements for C-reactive protein, another sepsis biomarker, and pathogen-associated molecular patterns (PAMPs). The PAMP sensor element in particular leverages the Wyss Institute’s broad-spectrum pathogen capture technology that uses a genetically engineered protein called FcMBL, which binds more than 100 different pathogens of all classes, as well as molecules on their surfaces that are released into blood when pathogens are killed (PAMPs) and act to trigger the sepsis cascade.

“Assembling three dedicated electrochemical sensor elements for biomarkers that can be present in blood at vastly different concentrations on a single chip posed a significant challenge. However, the three elements in the final sensor exhibited specific responses within the clinically significant range without interfering with each other, and they did so with a turnaround time of 51 minutes, which meets the clinical need of sepsis diagnosis within the first hour,” said Zumpančič.

To make the current eRapid technology even more effective and useful for clinical sample analysis, the team integrated it with a microfluidic system that takes out the human element involved in handling the sensor in the laboratory, and enhances the number of biomarker binding events at its surface. This allows biomarker analysis with the system to be automated, and enabled the researchers to decrease the turnaround time for measuring PCT to seven minutes.