This Ultrathin Sensor Could Save Your Lungs – and the Climate

Nitrogen dioxide, an air pollutant emitted by fossil fuel-powered cars and gas-burning stoves is not only bad for the climate – it’s bad for our health. Long-term exposure to NO2 has been linked to increased heart disease, respiratory diseases such as asthma, and infections.

Nitrogen dioxide is odorless and invisible – so you need a special sensor that can accurately detect hazardous concentrations of the toxic gas. But most currently available sensors are energy-intensive as they usually must operate at high temperatures to achieve suitable performance.

An ultrathin sensor, developed by a team of researchers from Berkeley Lab and UC Berkeley, could be the answer. In their paper published in the journal Nano Letters, the research team reported an atomically thin “2D” sensor that works at room temperature and thus consumes less power than conventional sensors.

The researchers say that the new 2D sensor – which is constructed from a monolayer alloy of rhenium niobium disulfide – also boasts superior chemical specificity and recovery time. 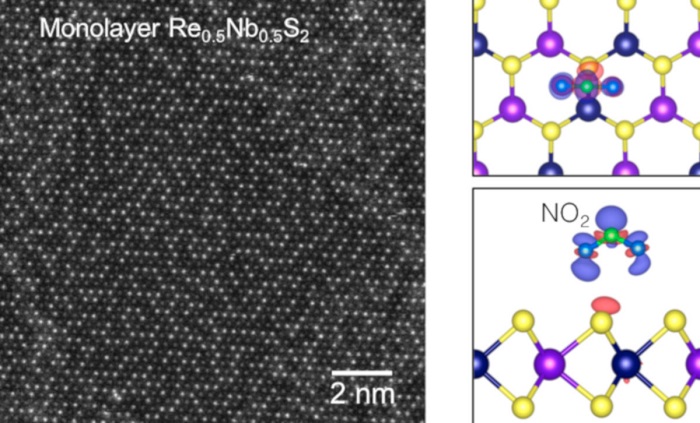 Left: Atomic-resolution electron microscopy image of the bilayer and trilayer regions of Re0.5Nb0.5S2 revealing its stacking order. Right: Real-space charge transfer plot showing the charge transfer from Re0.5Nb0.5S2 to the NO2 molecule. Color key: Re shown in navy; Nb in violet; S in yellow; N in green; H in gray; O in blue; and C in red.

Unlike other 2D devices made from materials such as graphene, the new 2D sensor electrically responds selectively to nitrogen dioxide molecules, with minimal response to other toxic gases such as ammonia and formaldehyde. Additionally, the new 2D sensor is able to detect ultralow concentrations of nitrogen dioxide of at least 50 parts per billion, said Amin Azizi, a postdoctoral scholar from UC Berkeley and lead author of the current study.

Once a sensor based on molybdenum disulfide or carbon nanotubes has detected nitrogen dioxide, it can take hours to recover to its original state at room temperature. “But our sensor takes just a few minutes,” Azizi said.

The new sensor isn’t just ultrathin – it’s also flexible and transparent, which makes it a great candidate for wearable environmental-and-health-monitoring sensors. “If nitrogen dioxide levels in the local environment exceed 50 parts per billion, that can be very dangerous for someone with asthma, but right now, personal nitrogen dioxide gas sensors are impractical.” Azizi said.

Their sensor, if integrated into smartphones or other wearable electronics, could fill that gap, he added.