Scientists Design ‘Nanotraps’ to Catch and Clear Coronavirus from Tissue

Researchers at the University of Chicago have designed a completely novel potential treatment for COVID-19: nanoparticles that capture SARS-CoV-2 viruses within the body and then use the body’s own immune system to destroy them.

These “nanotraps” attract the virus by mimicking the target cells the virus infects. When the virus binds to the nanotraps, the traps then sequester the virus from other cells and target it for destruction by the immune system.

In theory, these nanotraps could also be used on variants of the virus, leading to a potential new way to inhibit the virus going forward. Though the therapy remains in early stages of testing, the researchers envision it could be administered via a nasal spray as a treatment for COVID-19.

The results were published April 19 in the journal Matter.

“Since the pandemic began, our research team has been developing this new way to treat COVID-19,” said Asst. Prof. Jun Huang of the Pritzker School of Molecular Engineering, whose lab led the research. “We have done rigorous testing to prove that these nanotraps work, and we are excited about their potential.”

To design the nanotrap, the research team—led by postdoctoral scholar Min Chen and graduate student Jill Rosenberg—looked into the mechanism SARS-CoV-2 uses to bind to cells: a spike-like protein on its surface that binds to a human cell’s ACE2 receptor protein. 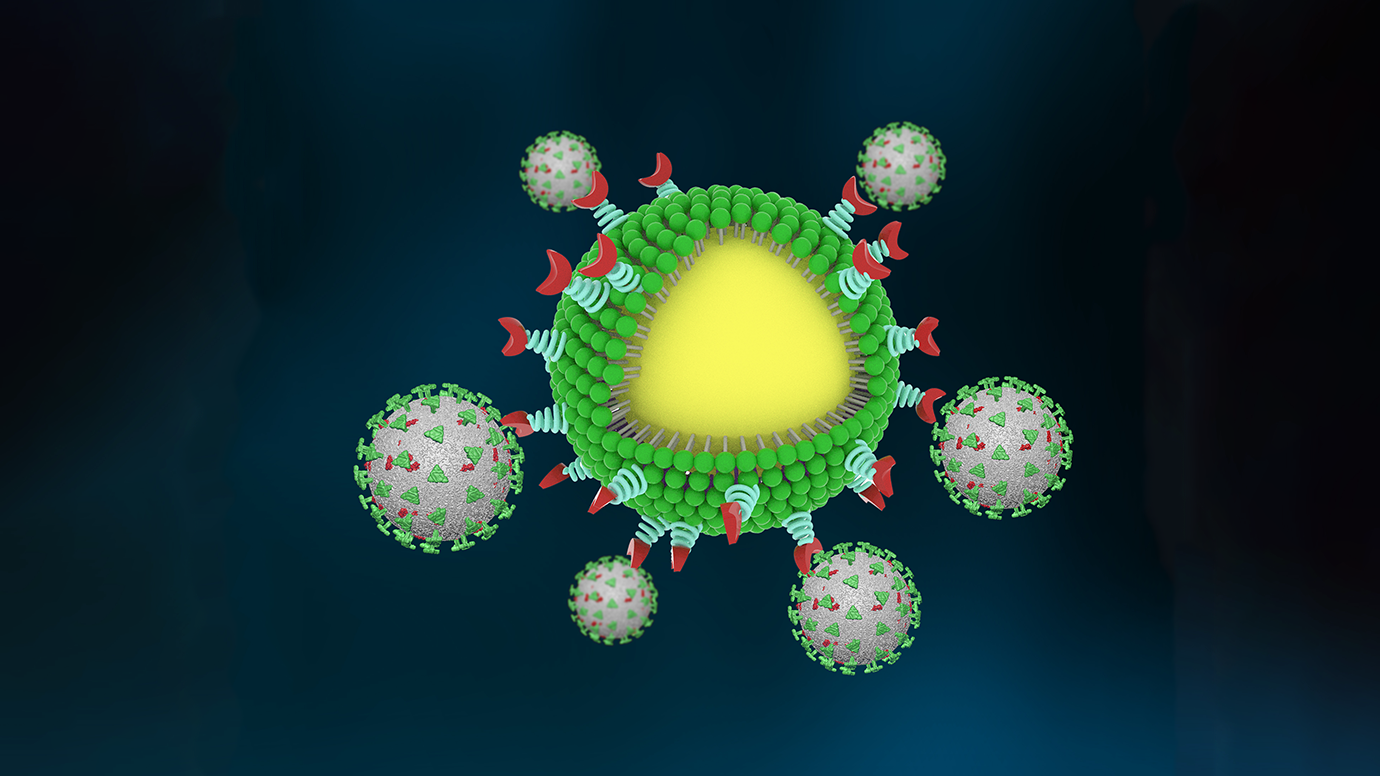 An artist’s concept of the nanotrap in action. The nanotrap is shown with a yellow core, green phospholipid shell, and red functionalized particles to bind the virus (shown in gray, decorated with their infamous spike protein in green).

Made of FDA-approved polymers and phospholipids, the nanoparticles are about 500 nanometers in diameter—much smaller than a cell. That means the nanotraps can reach more areas inside the body and more effectively trap the virus.

Then, to check to make sure the tiny particles looked the way they expected, they partnered with the lab of Assoc. Prof. Bozhi Tian to use electron microscopes to get a good look. “From our imaging, we saw a solid core and a lipid bilayer shell. That’s the essential part because it mimics the cell,” said Tian, who is appointed in the Department of Chemistry.

The researchers tested the safety of the system in a mouse model and found no toxicity. They then tested the nanotraps against a pseudovirus—a less potent model of a virus that doesn’t replicate—in human lung cells in tissue culture plates and found that they completely blocked entry into the cells.

The researchers also tested the nanoparticles with a pseudovirus in an ex vivo lung perfusion system—a pair of donated lungs that is kept alive with a ventilator—and found that they completely blocked infection in the lungs.

They also collaborated with researchers at Argonne National Laboratory to test the nanotraps with a live virus (rather than a pseudovirus) in an in vitro system. They found that their system inhibited the virus 10 times better than neutralizing antibodies or soluble ACE2 alone.

A potential future treatment for COVID-19 and beyond

Next the researchers hope to further test the system, including more tests with a live virus and on the many virus variants.

“That’s what is so powerful about this nanotrap,” Rosenberg said. “It’s easily modulated. We can switch out different antibodies or proteins or target different immune cells, based on what we need with new variants.”

The nanotraps can be stored in a standard freezer and could ultimately be given via an intranasal spray, which would place them directly in the respiratory system and make them most effective.

The researchers say it is also possible to serve as a vaccine by optimizing the formulation.

“This is the starting point,” Huang said. “We want to do something to help the world.”