‘Flashed’ Nanodiamonds Are Just a Phase

Diamond may be just a phase carbon goes through when exposed to a flash of heat, but that makes it far easier to obtain.

The Rice University lab of chemist James Tour is now able to “evolve” carbon through phases that include valuable nanodiamond by tightly controlling the flash Joule heating process they developed 18 months ago. Best of all, they can stop the process at will to get product they want. 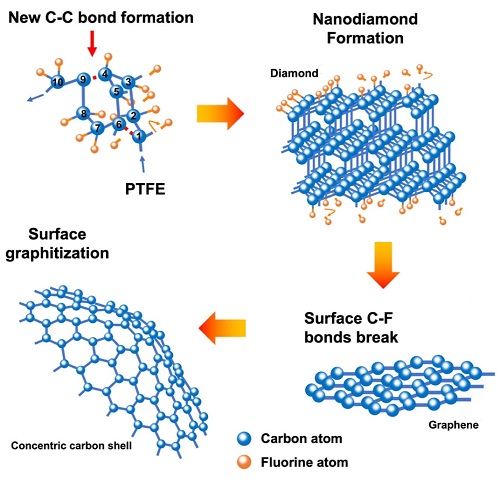 With the flash process introduced in 2020, a strong jolt of electricity can turn carbon from just about any source into layers of pristine turbostratic graphene in less than a second. (“Turbostratic” means the layers are not strongly bound to each other, making them easier to separate in a solution.)

The new work shows it’s possible to modify, or functionalize, the products at the same time. The duration of the flash, between 10 and 500 milliseconds, determines the final carbon allotrope.

The difficulty lies in how to preserve the fluorine atoms, since the ultrahigh temperature causes the volatilization of all atoms other than carbon.

To overcome the problem, the team used a Teflon tube sealed with graphite spacers and high-melting-point tungsten rods, which can hold the reactant inside and avoid the loss of fluorine atoms under the ultrahigh temperature.

To overcome the problem, the team used a Teflon tube sealed with graphite spacers and high-melting-point tungsten rods, which can hold the reactant inside and avoid the loss of fluorine atoms under the ultrahigh temperature. The improved sealed tube is important, Tour said.

“In industry, there has been a long-standing use for small diamonds in cutting tools and as electrical insulators,” he said. “The fluorinated version here provides a route to modifications of these structures. And there is a large demand for graphene, while the fluorinated family is newly produced here in bulk form.” 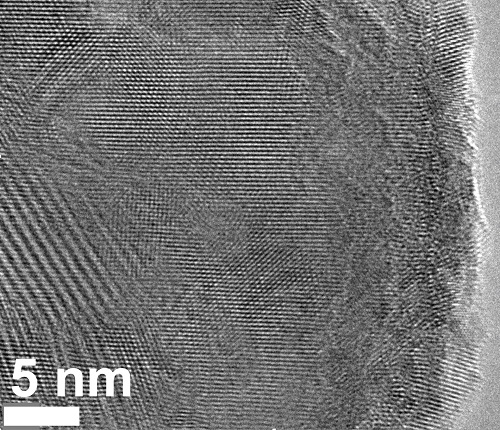 Nanodiamonds are microscopic crystals — or regions of crystals — that display the same carbon-atom lattice that macro-scale diamonds do. When first discovered in the 1960s, they were made under heat and high pressure from detonations. 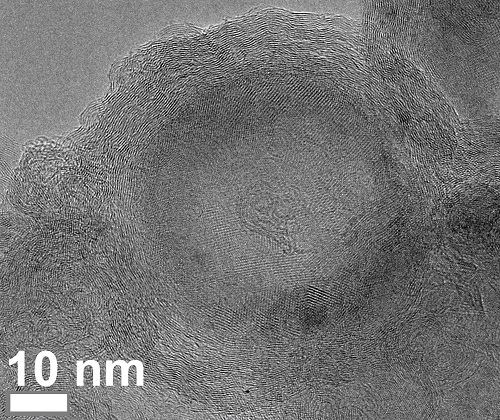 An electron microscope image shows a late stage in the evolution of carbon and fluorine atoms under flash Joule heating. The carbon atoms form concentric shells around a nanodiamond core. As heating proceeds, the diamond phase is replaced by the shell.

Nanodiamonds are highly desirable for electronics applications, as they can be doped to serve as wide-bandgap semiconductors, important components in current research by Rice and the Army Research Laboratory.

The new process simplifies the doping part, not only for nanodiamonds but also for the other allotropes. Tour said the Rice lab is exploring the use of boron, phosphorous and nitrogen as additives as well.

At longer flash times, the researchers got nanodiamonds embedded in concentric shells of fluorinated carbon. Even longer exposure converted the diamond entirely into shells, from the outside in.

“The concentric-shelled structures have been used as lubricant additives, and this flash method might provide an inexpensive and fast route to these formations,” Tour said.