As the third country in nanoscience publications, India possesses 147,026 WoS indexed nano-articles. Having registered only 666 nanotechnology patents in both EPO and USPTO, it ranked 20th in the EPO and 17th in USPTO. According to the StatNano database, 143 nano-products from 56 companies are produced and marketed in this country.

As the second most populous country in the world and due to having a significant number of research centers and researchers, India has always been among the top countries in the field of nanotechnology and especially in the production of nanoscience. In 2007, the National Nano Program in India was approved and announced by the Ministry of Science and Technology, and between 2012 and 2017, an approximate $87 million in investment was made by its government in this technology.

India has ranked third in the world regarding the nano-articles published since 2013, and in 2020 it possessed around 9% of the nano-articles indexed in WoS. Nevertheless, this country is not favorably positioned in terms of citation indicators such as the 5-year average citation per nano-article (where it ranks 46th) and the 5-year H-index (holding a ranking of 13). India has also registered only 666 nanotechnology patents in the USPTO and EPO for more than 147,000 nano-articles since 2001, a mere 5 patents per 1,000 nano-articles, and as such is far away from the top countries in this field, such as the United States and Japan, South Korea, etc.

India has also been active in nanotechnology standardization and has published 14 national standards and several guidelines in this field. Also, in technology commercialization, based on StatNano’s nanotechnology products database (NPD), 143 forms of nanoproducts have been produced by 56 Indian companies and offered in domestic and foreign markets. 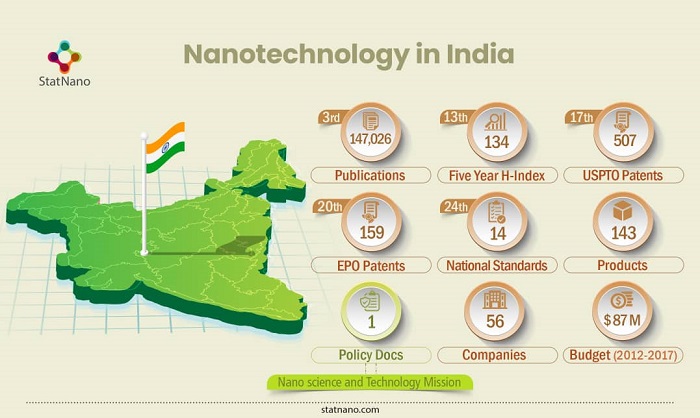 Source
The India Profile in StatNano