“Having Less Than Nothing” – New Particles of Negative Mass Discovered

Researchers have been able to measure the effect of electrons with negative mass in novel semiconductor nanostructures.

Physicists from the University of Regensburg publish results in the internationally renowned journal “Nature Communications”.

A large international research collaboration led by Dr Kai-Qiang Lin and Professor John Lupton from the Institute of Experimental and Applied Physics at the University of Regensburg has been able to measure the effect of electrons with negative mass in novel semiconductor nanostructures. The international team includes scientists from Berkeley and Yale (USA), Cambridge (England) and Tsukuba (Japan).

Many things in everyday life ring familiar only as positive quantities, the weight of an object, for example. Why matter always seems to have positive mass is one of the unsolved mysteries of physics. We may nowadays have almost become accustomed to the concept of negative interest rates, but what would happen if mass could turn negative? 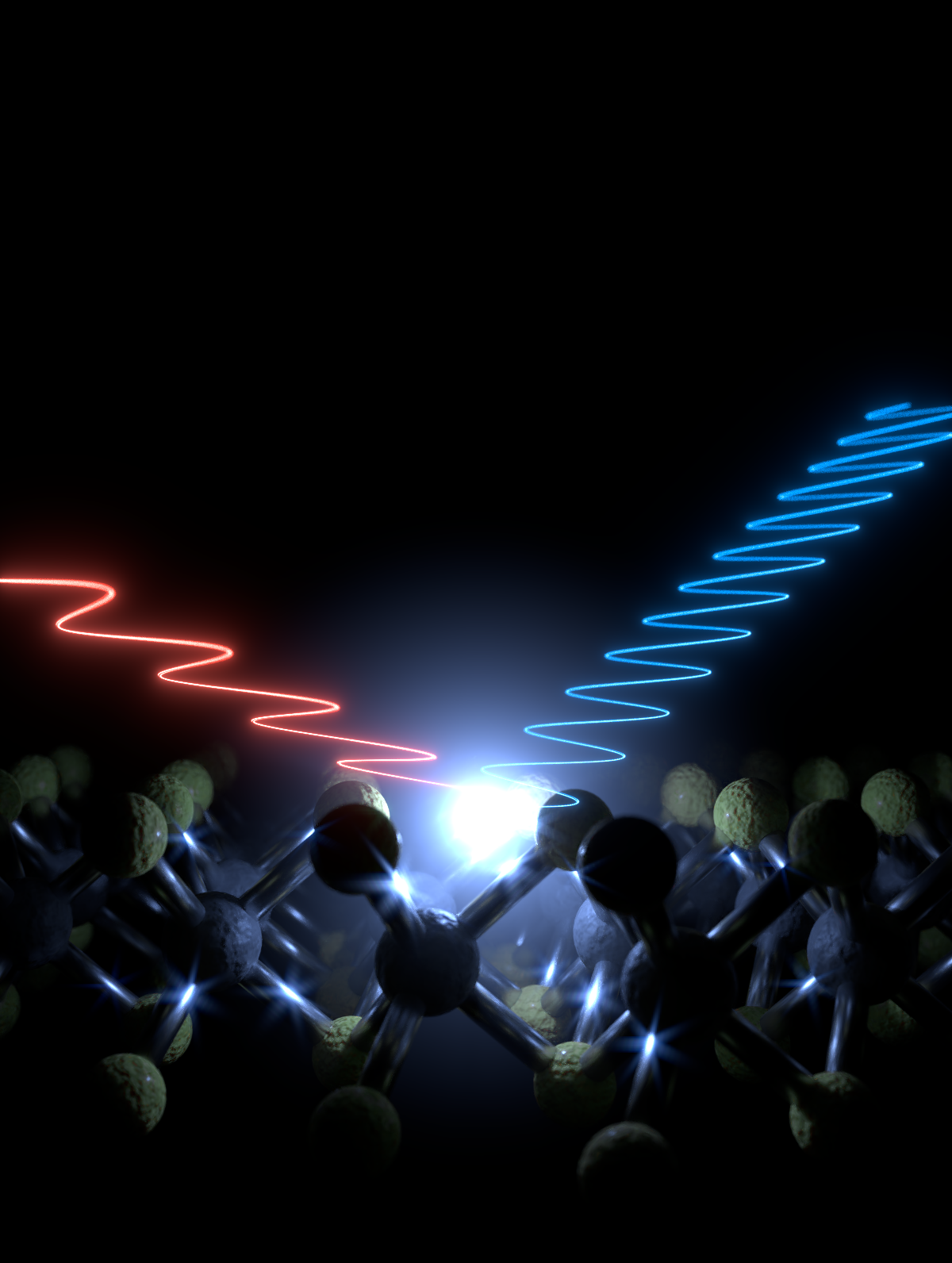 A red laser beam impinges on the atomically thin crystal WSe2 - which converts the red light of the laser into a blue glow.

Newtonian mechanics describes the consequences with the well-known equation Force=Mass*Acceleration, oder F=m*a. If a force acts on an object, it is accelerated. But watch out – if you try jump starting a car of negative mass, it will move towards you! Likewise, a golf ball of negative mass falling into water would not be slowed down by friction but would instead sink faster and faster!

Matter as we know it is basically composed of three elementary particles, the atomic nuclei with heavy protons and neutrons, and the light electrons. In general, the weight of a body is determined by the atomic nuclei. While the mass of the nuclei is a fixed quantity, the effective mass of the electrons is determined by the composition of the material in which they move. The mass directly affects the electronic properties of a material.

We all learnt in driving school that the braking distance increases quadratically with speed, another consequence of Newton’s formula: the motional energy of a car rises with the square of the speed v, E=1/2*m*v^2. If the mass m were negative, however, the energy of a particle such as an electron would decrease with increasing speed – the “braking distance” decreases!

When an electron moves through a material it collides frequently with other electrons and nuclei. As with driving a car, such collisions lead to a slowing down of the movement in the case of positive mass. An electron with negative mass, on the other hand, also loses energy, but is accelerated thereby. The researchers have now been able to observe precisely this effect for the first time.

The Regensburg scientists used a new type of semiconductor material, a single atomically thick sheet of the crystal tungsten diselenide. When the material is irradiated with a laser, it begins to glow: an electron absorbs the energy of the laser and emits it again in the characteristic colour of the material, red. This colour corresponds to the fundamental energy of an electron in the semiconductor. Just as water always flows downhill, one would expect electrons with higher energy to always tend to this lowest fundamental energy. The semiconductor should always glow red.

However, the team observed an astonishing effect. When irradiated with a red laser, the electrons emit not only red light, as expected, but also show a faint blue glimmer. Low-energy red light is therefore converted into blue light of higher energy, an extraordinary effect. By looking closely at the colour distribution and brightness of this blue light, i.e. the optical spectrum, it can be concluded that the blue glow arises from electrons with negative mass. This unexpected experimental finding could be substantiated with detailed quantum mechanical calculations of the electronic structure, which were carried out in this form for the first time.

At present, the discovery may still seem like more of a scientific oddity, but the scientists already have a number of possible applications in mind. For example, the concept may aid the development of superfast computers, where electrons move almost without resistance. The transition from positive to negative mass also creates so-called singularities. Such singularities – familiar from trying to divide something by zero on a calculator – are not entirely dissimilar to the black holes of cosmology.

Finally, due to the fact that the electrons in the semiconductor can apparently assume discrete energy states, as in an atom, it should be possible to transfer concepts of atomic quantum optics directly to the semiconductor. This could be used, for example, to develop new electronic components that convert the wavelength of light, store or even amplify light, or function as optical switches.