Researchers at the Institute of Organic Chemistry and Biochemistry of the CAS (IOCB Prague) and the Technical University of Liberec in collaboration with researchers from the Institute of Microbiology of the CAS, the Department of Burns Medicine of the Third Faculty of Medicine at Charles University (Czech Republic), and P. J. Šafárik University in Košice (Slovakia) have developed a novel antibacterial material combining nonwoven nanotextile and unique compounds with antibacterial properties. Called NANO-LPPO, the new material can fulfill a wide range of applications as a dressing for wounds, such as burn injuries, by preventing infection and thus facilitating treatment and healing.

Because the number of bacterial strains resistant to common antibiotics is steadily increasing, there is a growing need for new substances with antibacterial properties. A very promising class of substances are the so-called lipophosphonoxins (LPPO) developed by the team of Dominik Rejman of IOCB Prague in collaboration with Libor Krásný of the Institute of Microbiology of the CAS. 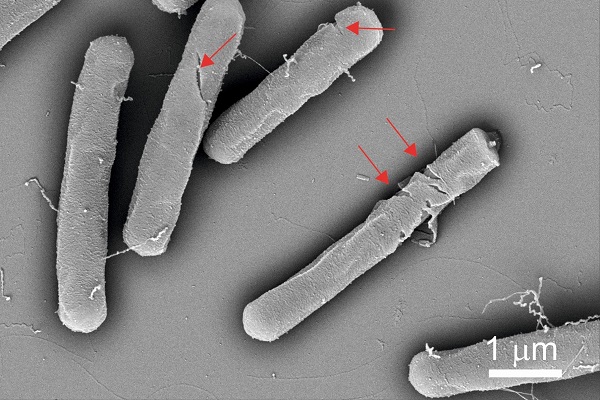 Bacillus subtilis bacteria after the application of LPPO.

“Lipophosphonoxins hold considerable promise as a new generation of antibiotics. They don’t have to penetrate the bacteria but instead act on the surface, where they disrupt the bacterial cell membrane. That makes them very efficient at destroying bacteria,” says Rejman.

“A big advantage of LPPO is the limited ability of bacteria to develop resistance to them. In an experiment lasting several weeks, we failed to find a bacteria resistant to these substances, while resistance to well-known antibiotics developed relatively easily,” explains Krásný.

The potential of LPPO is especially evident in situations requiring immediate targeted intervention, such as skin infections. Here, however, the substances must be combined with a suitable material that ensures their topical efficacy without the need to enter the circulatory system. This reduces the burden to the body and facilitates use. 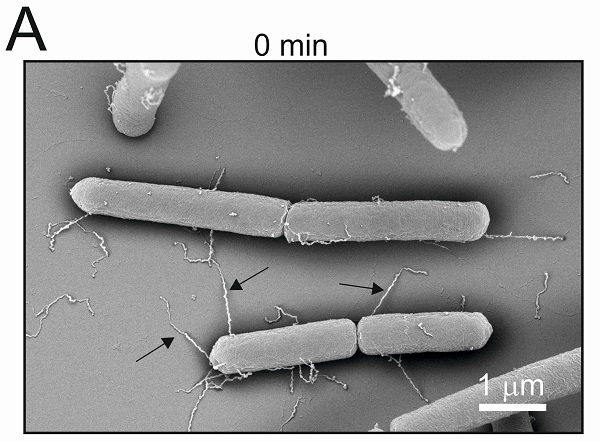 Bacillus subtilis bacteria before the application of LPPO. 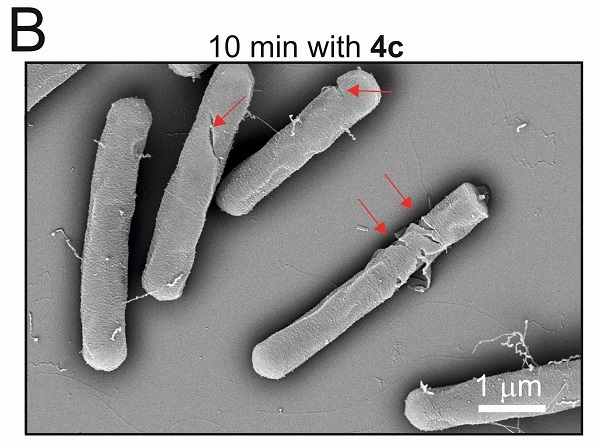 One such suitable material is a polymer nanofiber developed by the team of David Lukáš of the Faculty of Science, Humanities and Education at the Technical University of Liberec. The researchers combined it with LPPO to prepare a new type of dressing material for bacteria-infected skin wounds. The material’s main benefit is that the antibacterial LPPO are released from it gradually and in relation to the presence and extent of infection.

“The research and development of the material NANO-LPPO is a continuation of the work carried out in a clinical trial on the NANOTARDIS medical device, which we recently successfully completed in collaboration with Regional Hospital Liberec, University Hospital Královské Vinohrady, and Bulovka University Hospital. With its morphological and physical-chemical properties, the device promotes the healing of clean acute wounds,” says Lukáš. “This collaboration with colleagues from IOCB Prague is really advancing the possibilities for use of functionalized nanofiber materials in the areas of chronic and infected wounds.” Nonwoven nanotextile NANOTARDIS. With its morphological and physical-chemical properties, the device promotes the healing of clean acute wounds. 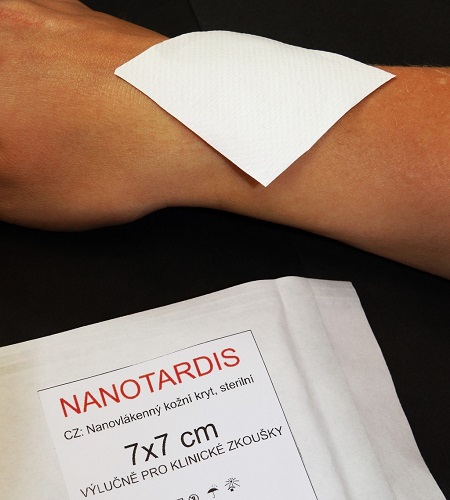 Nonwoven nanotextile NANOTARDIS. With its morphological and physical-chemical properties, the device promotes the healing of clean acute wounds.

“Enzymes decompose the nanomaterial into harmless molecules. The LPPO are an integral component of the material and are primarily released from it during this decomposition. Moreover, the process is greatly accelerated by the presence of bacteria, which produce lytic enzymes. This means that the more bacteria there are in the wound, the faster the material decomposes, which in turn releases more of the active substances into the affected site to promote healing and regeneration of soft tissues,” says Rejman in describing the action of the material.

“Our experiments on mice confirmed the ability of NANO-LPPO to prevent infection in the wound and thus accelerate healing and regeneration. There was practically no spread of infection where we used the material. If clinical trials go well, this could be a breakthrough in the treatment of burns and other serious injuries where infection poses an acute threat and complication to treatment,” explains wound care specialist Peter Gál of the Department of Burns Medicine at Charles University’s Third Faculty of Medicine, the Faculty of Medicine at P. J. Šafárik University in Košice, and the East Slovak Institute for Cardiovascular Diseases.

In terms of applications, NANO-LPPO is an interesting material for manufacturers of medicinal products and medical devices. Its commercialization is being coordinated through a collaborative effort between IOCB TECH, a subsidiary of IOCB Prague, and Charles University Innovations Prague, a subsidiary of Charles University, both of which were created for the purpose of transferring results of academic research to practice. The companies are currently seeking a suitable commercial partner.

The findings of the extensive interdisciplinary study were published in Scientific Reports.

Read the original article on Institute of Organic Chemistry and Biochemistry of the CAS (IOCB Prague).