Flatiron Institute research fellow Nikita Kavokine and his colleagues propose that water molecules interact with electrons in the nanotube walls, so that they push and pull on one another and slow down the flow. The findings are the first indication of quantum effects at a solid-liquid boundary.

For 15 years, scientists have been baffled by the mysterious way water flows through the tiny passages of carbon nanotubes — pipes with walls that can be just one atom thick. The streams have confounded all theories of fluid dynamics; paradoxically, fluid passes more easily through narrower nanotubes, and in all nanotubes it moves with almost no friction. What friction there is has also defied explanation.

In an unprecedented mashup of fluid dynamics and quantum mechanics, researchers report in a new theoretical study published February 2 in Nature that they finally have an answer: ‘quantum friction.’

The proposed explanation is the first indication of quantum effects at the boundary of a solid and a liquid, says study lead author Nikita Kavokine, a research fellow at the Flatiron Institute’s Center for Computational Quantum Physics (CCQ) in New York City. 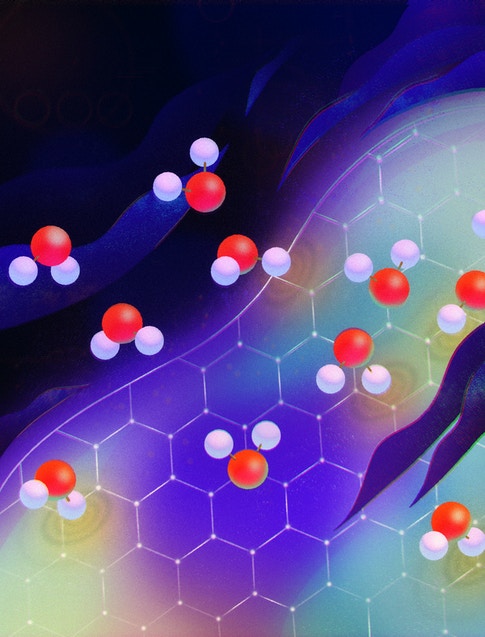 Water molecules flow near the honeycomb-patterned walls of a carbon nanotube. Interactions between the molecules and electrons in the walls can cause ‘quantum friction,’ researchers propose in a new study.

“The water-carbon system has been puzzling scientists for over a decade, and we’re proposing the first reasonable explanation for what happens,” Kavokine says. “This work shows a connection between hydrodynamics and the quantum properties of matter that was not obvious until now.”

In their explanation, Kavokine and his colleagues propose that the passing water molecules interact with electrons in the nanotube walls, so that the molecules and electrons push and pull on one another and slow down the flow.

This effect is strongest for nanotube variants constructed from multiple layers of single-atom-thick carbon sheets. That’s because electrons can hop from layer to layer. For narrower nanotubes, geometric constraints cause misalignment between the layers. The researchers propose that this atomic-scale mismatch hinders electron hops, reducing friction and causing faster flows through tighter tubes.

The theoretical findings could have significant implications for proposed carbon nanotube applications, such as filtering salt from seawater or generating energy using the difference in saltiness between salt water and fresh water. Less friction means less energy is needed to force water through the tubes.

“Our work outlines radically new ways of controlling fluid flow at the nanometer scale using advanced materials,” says Lydéric Bocquet, a director of research at the French National Centre for Scientific Research (CNRS) in Paris. Along with Kavokine, he co-authored the new study with Marie-Laure Bocquet, who is also a director of research at CNRS.

The researchers considered nanotubes with diameters ranging from 20 to 100 nanometers. For comparison, a water molecule is 0.3 nanometers across. The tubes can be so tiny thanks to their sturdy construction material, graphene: single-atom-thick sheets of carbon atoms in a honeycomb pattern. When you stack multiple graphene layers, you get graphite (like the kind found in pencil lead).

Since 2005, scientists have measured how quickly and easily water moves through carbon nanotubes. Because they are so small, nanotubes would make pretty terrible drinking straws: The liquid flows at only billionths of a liter per second.

But the liquid does at least move with very little resistance because the graphene walls of the tubes are entirely smooth. This lack of surface roughness reduces the drag on passing water molecules. The graphene also doesn’t catch molecules on its surface as many other materials do. Those caught molecules can similarly slow the flow.

Measurements in early studies suggested that water flows almost without friction through the nanotubes. In 2016, however, an experimental study in Nature co-authored by Lydéric Bocquet found that the amount of friction depends on nanotube radius. Confusingly, the friction effect went up for larger nanotubes. That didn’t make sense, since the larger tubes should be just as smooth as the smaller ones. Those oddities led to debate within the field and became key knowledge gaps in the study of nanoscale flows.

Because existing theories of fluid dynamics failed, Kavokine and his colleagues delved deeper into the properties of the graphene walls. Such an approach is unusual for studying fluids, Kavokine says. “In hydrodynamics, the wall is just a wall, and you don’t care what the wall is made of. We realized that at the nanoscale, it actually becomes very important.” In particular, Kavokine realized that quantum effects at the graphene-water interface could produce friction by allowing the flowing water to dissipate energy into the flowing electrons in the graphene.

Surprisingly, the COVID-19 pandemic aided the research. “There was a steep theoretical learning curve to tackle this problem,” Kavokine says. “I had to read a lot of fundamental books and learn new things, and being in lockdown for several months really helped that.”

One crucial factor was that some of the electrons in graphene can move freely through the material. In addition, those electrons can interact with water molecules electromagnetically. That’s because each water molecule has a slightly positively charged end and a slightly negatively charged end due to the oxygen atom pulling more strongly on the electron cloud than the hydrogen atoms.

In the researchers’ explanation, electrons in the graphene wall move along with passing water molecules. But the electrons tend to slightly lag behind, slowing the molecules. This effect is known as electronic or quantum friction and has only previously been considered as a factor in interactions between two solids or a single particle and a solid.

The situation is more complex, however, when it involves a liquid, where many molecules interact all together. The electrons and water molecules jiggle due to their heat energy. If they happen to jiggle at the same frequency, an effect called a resonance occurs that increases the quantum friction force. This resonance effect is largest for nanotubes with well-aligned layers, since the motion of electrons between the layers is in sync with that of the water molecules.

This newfound interaction between liquids and solids went unnoticed until now for two main reasons, says Kavokine. Firstly, the resulting friction is so slight that it would be negligible for materials with rougher surfaces. Secondly, the effect relies on the electrons taking some time to adjust to the moving water molecules. Molecular simulations can’t detect the friction because they use the Born-Oppenheimer approximation, which assumes that electrons adapt instantly to the motion of nearby atoms.

The new study is theoretical, so the researchers say experiments are needed to confirm their proposal and explore some of its counterintuitive consequences. They also point out that there is a need for improved simulations that don’t rely on the Born-Oppenheimer approximation. “I’m hoping that this changes our way of dealing with these systems and brings new theoretical tools to other problems,” Kavokine says.