Which Countries Have Published the Largest Number of Nano-articles in Q1 Journals?

More than half of the world's nano-articles in 2021 were published in Q1 journals. China, the United States and South Korea possess the largest share of these articles, respectively.

According to Statnano, in 2021, nearly 213,000 nano articles were indexed in the Web of Science (WoS) database, of which more than half (51%) were published in the first quarter journals in terms of impact factor (known as Q1 journals); this proportion stood at about 37% for all the articles indexed in WoS in 2021. Alternatively stated, nano articles were published in more credible journals with a higher impact factor compared with the other articles.

The table below shows the number of nanotechnology articles published in Q1 journals for the top 25 countries based on this indicator. Nearly half of all the nano-papers published in Q1 journals by 2021 were published by Chinese researchers. Following China, the United States and South Korea are in the next places. India and Germany were ranked fourth and fifth, respectively, in this indicator, and Iran was the sixth country.

About 73% of all Singaporean nanotechnology articles were published in Q1 journals in 2021, ranking first among these countries. Australia and Spain are in the second and third places, respectively, at just over 69%. These countries, along with the Netherlands and Switzerland, are among the countries that usually have the highest average impact factor for their nano-articles. In contrast, Russia, India and Turkey published a smaller number of nano-articles in Q1 journals.

The chart below also indicates the ranking of these countries in terms of the number of nano articles and the proportion of Q1 articles to their total nano articles. 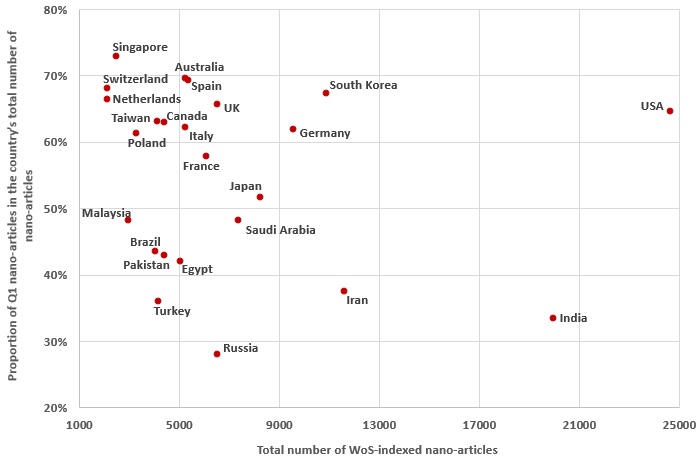