An international team of researchers has discovered that Schwann cells—which are abundant in the peripheral nervous system and create a protective sheath around nerve fibers—play an essential role in migraine pain. Their study, conducted in mice and human Schwann cells and published in Nature Communications, illustrates how pain is signaled from within Schwann cells and finds several ways to block this signaling, providing potential targets for new migraine treatments.

Migraines affect more than 15 percent of adults, with women twice as likely as men to experience these intense headaches. Calcitonin gene-related peptide (CGRP), a small protein in the nervous system, is known to play an important role in migraine pain; in fact, a new class of drugs to prevent migraines use injections of monoclonal antibodies to target CGRP or its receptor.

“While CGRP has been implicated in migraine pain, how it causes pain has been an area of controversy in the scientific community,” said Nigel Bunnett, PhD, professor and chair of the Department of Molecular Pathobiology at NYU College of Dentistry. Bunnett led the study with Pierangelo Geppetti, MD, professor of clinical pharmacology at the University of Florence and director of the Headache Center of Careggi University Hospital.

“The success of CGRP monoclonal antibodies for migraine and the poor ability of antibodies to penetrate the blood brain barrier suggest that CGRP causes pain in the periphery rather than within the brain,” added Bunnett, a researcher in the NYU Pain Research Center.

To explore the cellular mechanism of CGRP-evoked pain, Bunnett and his colleagues focused on Schwann cells, which are found outside the brain in the peripheral nervous system. The researchers studied mice in which the CGRP receptor, called CLR/RAMP1, was disabled in Schwann cells. They modified the CGRP receptor by deleting RAMP1, one of two important components of the receptor, from Schwann cells in the facial area of mice.

Using human Schwann cells, the researchers then discovered what occurs within these cells to signal pain. They found that when CGRP binds to its receptor on a Schwann cell, the receptor moves into a compartment inside the cell called an endosome. Within endosomes, the CGRP receptor continues to signal for prolonged periods of time. That signaling generates nitric oxide—a mediator of pain—which is then released from the Schwann cell and interacts with an ion channel called TRPA1 on an adjacent neuron. TRPA1 excites the neuron and transmits pain signals. 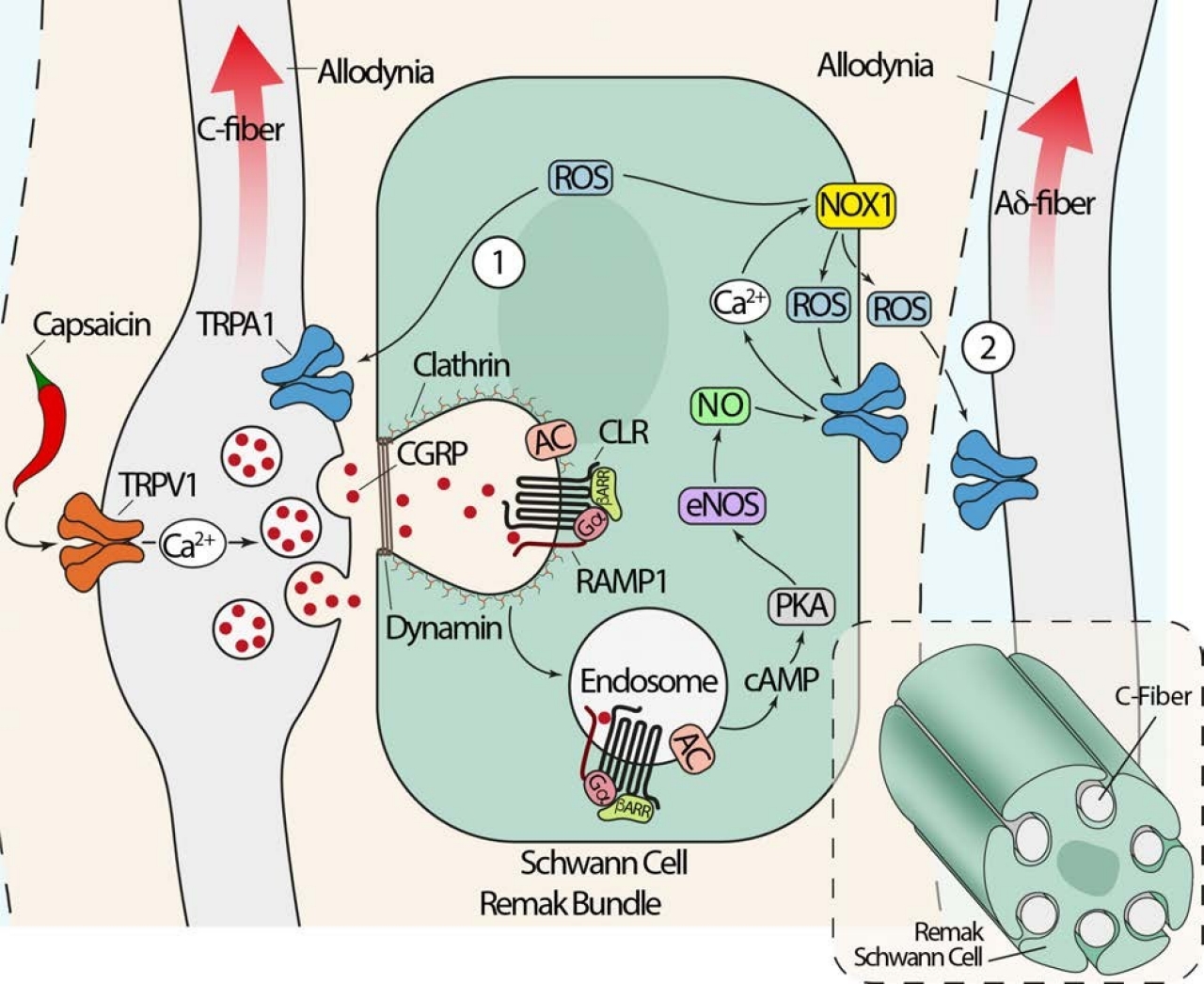 An illustration of the pain signaling pathway elicited by CGRP. CGRP activates the CGPR receptor on Schwann cells. The CGPR receptor traffics to endosomes, where sustained signaling results in the release of nitric oxide. Nitric oxide targets ion channel TRPA1 in Schwann cells, which excites the neuron and transmits pain signals related to migraine.

The researchers also successfully blocked CGRP-evoked pain using nanoparticles in which they encapsulated a small molecule drug that binds to and blocks the CGRP receptor. While most drugs only reach the surface of cells, nanoparticles can be designed to help medicine reach the endosome inside a cell and to release the drug once it arrives at the intended location. In Schwann cells, the nanoparticles carried the drug into endosomes and blocked the CGRP receptor, which strongly inhibited migraine pain.

“While the role of CGRP in migraine pain is well known, our study is the first to directly connect Schwann cells to migraine pain. It offers potential new approaches to treating migraine based on our enhanced understanding of how pain is signaled from within endosomes,” said Bunnett.

The researchers are working with several partners, including the National Center for Advancing Translational Sciences of the National Institutes of Health, to continue studying the use and safety of nanoparticle drug delivery before these treatments can be tested in humans.