From a nanoscale “brobot” flexing its muscles to a discussion of the artistry of scientific images, participants at a March 9 event got an up-close look at how quantum science and nanotechnology are shaping our lives.

“Arts Unplugged: Science of the Very, Very Small” included both online and in-person activities, centered around 11 TED-style talks given by faculty members in the College of Arts and Sciences. The faculty shared their research and thoughts on topics from gene manipulation and miniature robots to ethical considerations of nanotech and the interplay between science and fiction through an online eCornell presentation, which was also livestreamed to audiences in the Groos Family Atrium in Klarman Hall and the Clark Atrium in the Physical Sciences Building.

“I’m a particle physicist and particle physicists like to take things apart until we find their smallest constituents, pulling them apart until there’s nothing indivisible anymore,” said Peter Wittich, professor of physics (A&S) and director of the Laboratory of Elementary Particle Physics, echoing the Arts Unplugged theme. 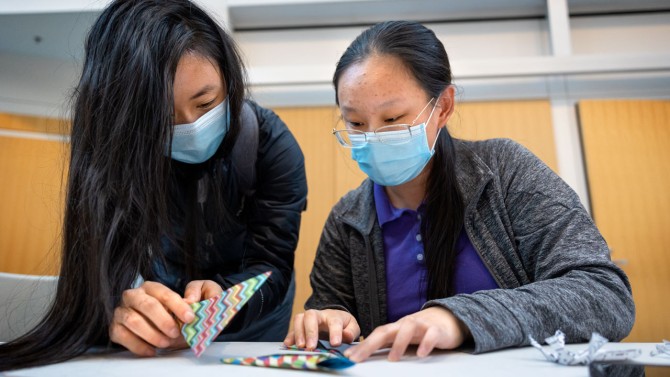 Members of the Cornell community attempt some origami during the event.

The event brought together scientists and humanists from numerous fields, including physics, chemistry, biology, literature and moral psychology. Natalie Wolchover, senior science editor and writer at Quanta Magazine and the Zubrow Distinguished Visiting Journalist in A&S, served as moderator, asking questions of each of the panelists after their presentations.

“We tend to think of ourselves as small in the grand scheme of things, and understandably so: The universe is huge,” Wolchover said. “You’d have to line up 500 trillion trillion humans head to toe to stretch across the observable universe. And yet, somehow it’s still easier to conceive of how much bigger space is compared to us than it is to imagine how small the smallest things in the universe are relative to us.”

John Marohn, professor of chemistry and chemical biology (A&S), is building a microscope that can image things smaller than a nanometer – the size of an individual water molecule.

Roald Hoffmann, the Frank H. T. Rhodes Professor Emeritus in the Department of Chemistry and Chemical Biology (A&S), spoke of the beauty of scientific images, showing an image of the nanoworld that he compared to a chocolate wafer and another that looked like sand dunes.

“These are images that convey information, but they also have some significance just as images,” Hoffmann said. “The scientists are making artistic choices – they don’t think they are, but they are – in the process of showing them.”

Ailong Ke, professor of molecular biology and genetics (A&S), talked about how CRISPR technology can be used to combat disease.

“In the next phase of our study, we really hope to bring [about CRISPR’s] therapeutic power,” Ke said, which could be used to delete viruses from our genome or halt the growth of cancer cells.

Directly after Ke’s talk, Julia Markovits, associate professor of philosophy (A&S), discussed the “slippery slope” argument that is often used to justify prohibiting a new technology like gene editing. If we use CRISPR to cure sickle cell anemia, for example, applying the “slippery slope” means that “designer” babies would inevitably follow. But such reasoning is faulty, said Markovits: a better metaphor would be a string of dominoes where it’s difficult to topple the entire string.

Eun-Ah Kim, professor of physics (A&S), talked about her work studying social phenomena of electrons. “We are a lucky generation because we can see these electron spins implemented into a set of qubits that can be individually controlled, to be programmed for computation, in quantum computers,” she said. “In my research, I try to bridge this nascent technology with more established classical computing.”

During the program’s intermission, Michael Reynolds, M.S. ’17, Ph.D. ’21, postdoctoral associate in the Smith School of Chemical and Biomolecular Engineering in the College of Engineering, demonstrated an origami model of a nanobot for viewers to try.

About 30 students from the Milstein Program in Technology and Humanity attended the livestream in Clark Atrium and attempted the origami duck, with some in-person help from Reynolds. Those attending the livestream in Klarman Hall were assisted by Qingkun Liu, postdoctoral researcher in physics. Origami design principles are used by researchers, including Reynolds and Liu, working with Cohen and Paul McEuen, the John A. Newman Professor of Physical Science (A&S), as they create tiny programmable robots, including the “brobot.”

The intermission time also included the announcement of winners of the College’s Envisioning the Future contest – Lucca Schwartz in the elementary category; Avalon Golden and Sophia Schumaecker in the high school category and Vinh Truong in the adult category. Their winning submissions can be found online on the Arts Unplugged website.

The recording of the event is available to watch for free on eCornell.