In a Sea of Magic Angles, ‘Twistons’ Keep Electrons Flowing Through Three Layers of Graphene

When it comes to superconductivity, three layers of graphene can be better than two. A new study from Columbia physicists reveals the atomic details that help explain why.

The discovery of superconductivity in two ever-so-slightly twisted layers of graphene made waves a few years ago in the quantum materials community. With just two atom-thin sheets of carbon, researchers had discovered a simple device to study the resistance-free flow of electricity, among other phenomena related to the movement of electrons through a material. 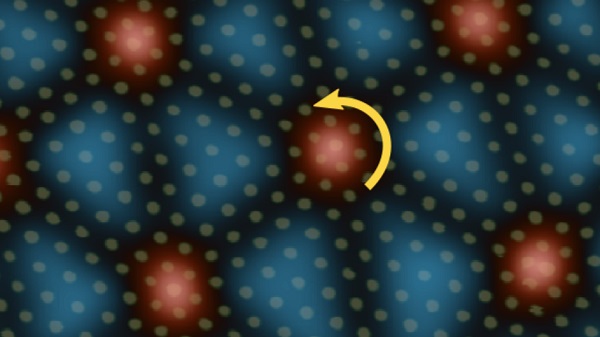 In layers of graphene, the angle of twist between atoms can vary, which impacts its ability to superconduct. In the three layers of graphene depicted here, local twist angle can range from around 1.5 degrees (blue)—close to the "magic angle" for this device—to around 1.9 degrees (red). The arrow shows a twist angle vortex, or twiston. These areas of disorder help make the overall device more orderly. Credit: Simon Turkel

But, the angle of twist between the two layers has to be just right—at the so-called “magic” angle of 1.1 degrees—for the phenomena to be observed. That’s because atoms in the layers want to resist the twist and "relax" back to a zero angle, explains Joshua Swann, a PhD student in the Dean Lab at Columbia. As magic angles vanish, so does superconductivity.

Adding a third layer of graphene improves the odds of finding superconductivity, but the reason was unclear. Writing in Science, researchers at Columbia reveal new details about the physical structure of trilayer graphene that help explain why three layers are better than two for studying superconductivity.

Using a microscope capable of imaging down to the level of individual atoms, the team saw that groups of atoms in some areas were scrunching up into what Simon Turkel, a PhD student in the Pasupathy Lab, dubbed “twistons.” These twistons appeared in an orderly fashion, allowing the device as a whole to better maintain the magic angles necessary for superconductivity to occur. 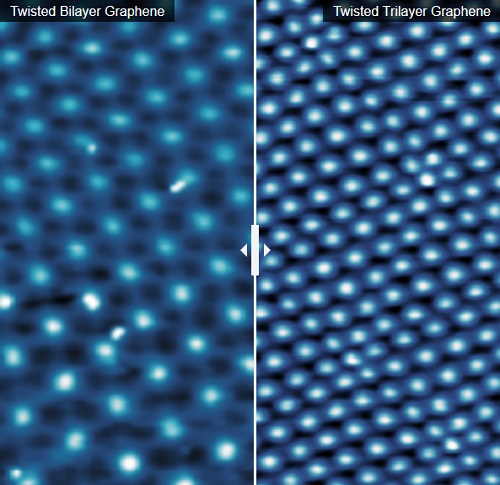 Spot the Difference in Magic Angles: With their scanning tunnel microscopes, the Pasupathy Lab can reach atomic-level resolution. This lets researchers observe the structural underpinning of quantum phenomena observed in devices built from 2D materials. Here, compare and contrast the structure of bilayer graphene (left), a fickle superconductor, and more robust trilayer graphene (right), which the Pasupathy Lab has now imaged for the first time.

It’s an encouraging result said Swann, who built the device for the study. “I've made 20 or 30 bilayer graphene devices and seen maybe two or three that superconducted,” he said. “With three layers, you can explore properties that are hard to study in bilayer systems.”

Those properties overlap with a class of complex materials called the cuprates, which superconduct at a relatively high temperature of -220 °F. A better understanding of the origins of superconductivity could help researchers develop wires that won’t lose energy as they conduct electricity or devices that won’t need to be kept at costly-to-maintain low temperatures.

In the future, researchers hope to link what they see in their scans with measurements of quantum phenom in trilayer devices.  “If we can control these twistons, which all depend on the angle mismatch between the top and bottom layers of the device, we can do systematic studies of their effects on superconductivity,” said Turkel. “It’s an exciting open question.”