Spartan research could lead to efficient, low-cost chemical reactions for valuable products with help from teensy compartments made by bacteria

Thanks to a lesser-known feature of microbiology, Michigan State University researchers have helped open a door that could lead to medicines, vitamins and more being made at lower costs and with improved efficiency.

The international research team, led by Spartans Henning Kirst and Cheryl Kerfeld in the College of Natural Science, have repurposed what are known as bacterial microcompartments and programmed them to produce valuable chemicals from inexpensive starting ingredients.

The team published its work Feb. 22 in the journal Proceedings of the National Academy of Sciences.

“The microcompartments, they’re like nanoreactors or nanofactories,” said Kirst, a senior research associate in Kerfeld’s lab, which operates at both MSU and Lawrence Berkeley National Laboratory.

Kirst, Kerfeld and their teammates saw the microcompartments as an opportunity to take important chemical reactions to the next level. Over the past few decades, researchers have harnessed the power of enzymes found in bacteria to create valuable chemical products including biofuels and medicines.

In those industrial applications, though, chemists often rely on the entire microorganism to produce the desired compound, which Kirst said can lead to complications and inefficiencies. 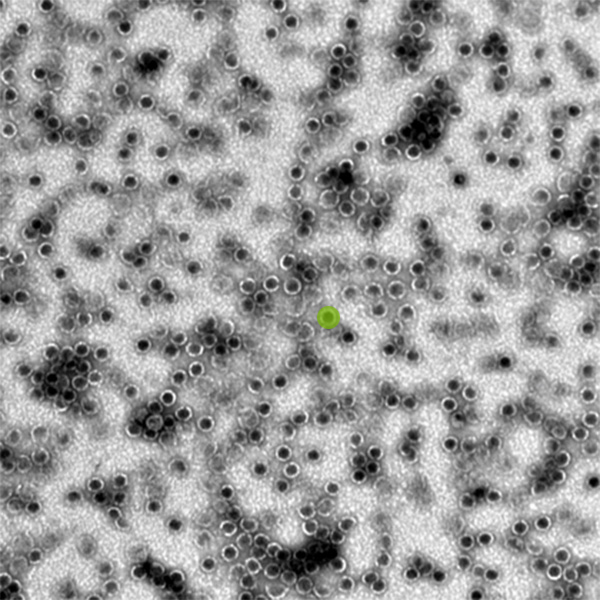 Each orb — one has been highlighted in lime green — is a bacterial microcompartment, about 40 nanometers in diameter. That’s about one one-thousandth of the diameter of a human hair.

“The analogy we use is it’s like a house. If you have reactions running all over the place, it can get very complex,” Kirst said. “Imagine you start taking a shower in the basement, but then you need to go to the second floor to get shampoo, then back to the basement to finish showering and then to the first floor to get your towel. It’s just very inefficient.”

In the case of the microorganisms, the bacteria might make one ingredient on one side of its cell, while the specific enzyme that uses that ingredient to make the final product is on the other side. Then, even if that ingredient can make the trip across the cell, there are other enzymes along the way that might snatch it up and use it for something else.

The enzymes, however, live in bacterial microcompartments, which are like rooms within the house that is the cell. The Spartans and their colleagues showed they could engineer microcompartments to optimize a specific reaction, bringing the requisite enzymes and ingredients together in the same, smaller space, rather than having them spread out.

“We’re putting everything we need for a task in the same room,” Kirst said. “The compartmentalization gives us a lot more control and enhances efficiency.”

“It’s like working in an efficiency apartment versus the Spelling Manor,” said Kerfeld, a Hannah Distinguished Professor at MSU (the Spelling Manor is a huge property in Los Angeles — it has over 100 rooms and more than 50,000 square feet). Kerfeld also works in the MSU-DOE Plant Research Laboratory, which is supported by the U.S. Department of Energy.

As a proof-of-concept, the team engineered a microcompartment system that could turn the simple and inexpensive compounds formate and acetate into pyruvate.

“Pyruvate is also a relatively simple precursor for virtually anything biology can make — for example, pharmaceuticals, vitamins and flavorings,” Kirst said. “But we think the whole principal is very generalizable to many other metabolic pathways that would be interesting to explore.”

And they aren’t the only ones who think so.

“The system described here can be used as a platform in ambitious engineering projects,” wrote Volker Müller in a commentary about the research. Müller is the head of the Department of Microbiology and Bioenergetics at Goethe University Frankfurt and was not involved in the project. 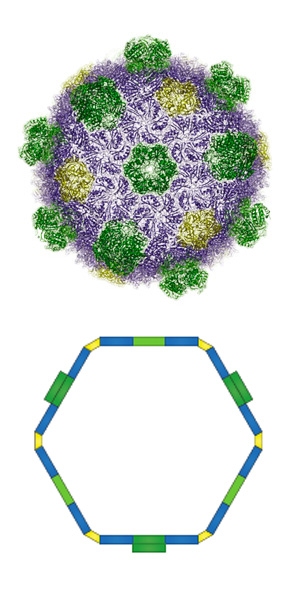 Bacterial microcompartments are made out of proteins, represented by the colorful, wavy lines in the top figure. These icosahedral shells are empty, as shown below, and Spartan researchers have helped show how they can add enzymes of choice inside.

“This is exciting and paves the road to use the strategy to engineer (bacterial microcompartments) for the production of various compounds from cheap substrates,” he said.

Bacterial microcompartments are similar to the organelles or tiny “organs” found in the cells of eukaryotes, which include plants, humans and other animals. Although they’re found in many different types of bacteria, where they help carry out a multitude of reactions, they’re still relatively new to science. It took the advent of high-resolution electron microscopy and affordable gene sequencing for researchers to appreciate how widespread and versatile these compartments are, Kerfeld explained.

Working with researchers at the Max Planck Institute of Molecular Plant Physiology, the Spartan researchers have bolstered that versatility. They’ve shown how scientists can create versions of these compartments that aren’t found in nature.

“We can take the architecture for the compartment and put in a totally new type of reaction,” Kerfeld said. “This strategy could be applied in lots of different ways for a lot of different uses, even uses that aren’t compatible with bacteria.”

“I think that’s the major accomplishment,” Kirst said. “We took a big step toward making a synthetic bacterial organelle.”