Researchers at TU Wien have developed a novel method that is suitable for the mechanical tensile testing of micro and nanofibres. The special feature: Samples can be reversibly coupled to and uncoupled from the force sensor.

Testing the stiffness or tensile strength of fibres in the nano to micro range experimentally, is often very time-consuming. The samples in most cases have to be affixed using adhesive on both ends. Not only curing of the adhesive takes time, but also the sensor to which the fibre is glued cannot be reused.

Researchers from TU Wien, Mathis Nalbach, Philipp Thurner and Georg Schitter, have developed a test system that overcomes these obstacles. The functional principle is as follows: A magnetic microshpere attached to the nanofibre can be picked up with magnetic tweezers. This allows the sphere to be inserted into the fork attached to a force sensor and thereby coupled to the sensor. Since the magnetic sphere can also be removed from the fork using the magnetic tweezers, another nanofibre can be picked up immediately. This significantly increases the sample throughput. The researchers recently presented the patent-pending "NanoTens" tensile tester in the journal "Review of Scientific Instruments". 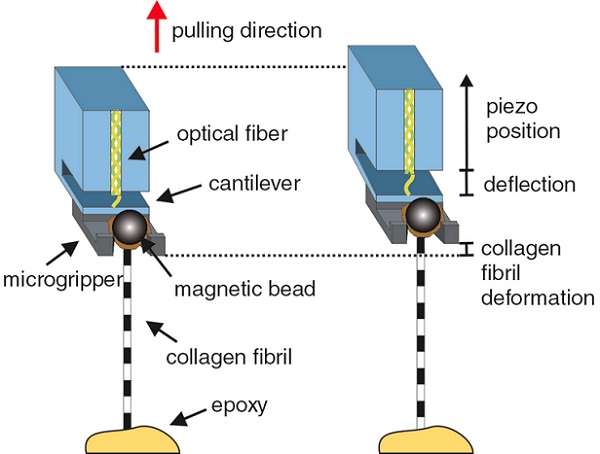 Scheme of the nano-tensile testing setup – a nanofibre (here a collagen fibril) equipped with a magnetic microsphere is inserted into the microgripper via magnetic tweezers. Through controlled movement of the force sensor, force-distance curves can be recorded. After the test, the sample can easily be removed and a new one can be connected.

Adapted to the real conditions

While the atomic force microscope can be used to examine the mechanical properties of a fibre by means of a nano-penetration test, the NanoTens enables material testing for fibres under the more relevant, tensile load. Philipp Thurner from the Biomechanics research department explains the working principle as follows: "You can imagine the device like a microscopic forklift. The magnetic ball, which is glued to the fibre, is inserted into the fork. By moving the fork up or down, the fibre can now be tested under tensile load. This type of load is particularly relevant for biological fibres such as collagen fibrils. Physiologically, these are mainly loaded under tension, and therefore their mechanical properties are particularly relevant under precisely this load."

The biomechanists Nalbach and Thurner mostly examine natural fibres such as collagen. Since their mechanical properties depend strongly on external conditions, it is important to also take these into account in tensile testing. "We succeed in this because tensile tests can be carried out in different media with the NanoTens. A dry collagen fibre, for example, is much more brittle and stiff than a moist or fully hydrated one. Its diameter also decreases significantly when it is dried out," says Mathis Nalbach, first author of the study.

With their method, the researchers not only succeed in simulating physiological conditions, but the results generated with NanoTens also gain in validity. This is because a large number of measurements are needed to obtain meaningful results on biological materials such as collagen fibrils. "Conventional methods allow us to examine only one or two samples per week. This makes it virtually impossible to conduct statistically meaningful studies," describes Nalbach the problem. Philipp Thurner adds: "The new method allows the fibres to be connected and disconnected quickly. As a result – and because the sensor is reused – we can not only increase the number of tensile tests to up to 50 measurements per week, but also the precision of the measurement."

The tensile tests can - depending on the choice - be carried out over a wide force range and also force-controlled via a control system. This is important because tensile test methods normally assume that the material has linear elastic properties. However, this is not the case with biological tissues, such as collagen fibrils: they are viscoelastic. Force-controlled tensile testing enables the investigation of this very viscoelasticity.

From the invention to the product

NanoTens has already been internationally patented by the TU Wien. The feasibility of the method has also been proven (TRL 6), as can be read in the study by Nalbach et al. "The next step would be to join forces with industrial partners. We hope to find a licensee with the help of the research and transfer support. We are interested in cooperating with industry on this topic," says Mathis Nalbach. NanoTens is designed in such a way that it can generally be integrated into any indentation measuring device or atomic force microscope. In addition to materials science, tensile testing is also used - among others - in the life sciences, semiconductor technology and electronics.