Rice University chemical engineers have improved their design for a light-powered catalyst that rapidly breaks down PFOA, one of the world’s most problematic “forever chemical” pollutants.

Michael Wong and his students made the surprising discovery in 2020 that boron nitride, a commercially available powder that’s commonly used in cosmetics, could destroy 99% of PFOA, or perfluorooctanoic acid, in water samples within just a few hours when it was exposed to ultraviolet light with a wavelength of 254 nanometers.

“That was great because PFOA is an increasingly problematic pollutant that’s really hard to destroy,” said Wong, corresponding author of a study about the redesigned catalyst in Chemical Engineering Journal. “But it was also less than ideal because the boron nitride was activated by short-wave UV, and the atmosphere filters out almost all of the short-wave UV from sunlight. We wanted to push as much as possible boron nitride’s ability to access energy from other wavelengths of sunlight.”

Long-wave UV, or UV-A, has wavelengths ranging from about 315-400 nanometers. It’s what causes suntans and sunburns, and it’s plentiful in sunlight that reaches Earth. Boron nitride is a semiconductor, and it isn’t activated by UV-A. Titanium dioxide, a common ingredient in sunscreen, is a semiconductor that is activated by UV-A, and it had even been shown to catalyze the breakdown of PFOA, albeit very slowly, when exposed to UV-A. 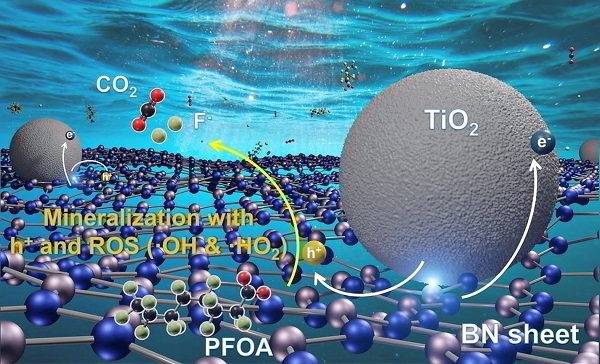 Illustration showing how a composite material containing sheets of boron nitride (lattice of blue and silver balls) and nanoparticles of titanium dioxide (gray spheres) uses long-wave ultraviolet energy in sunlight to photocatalyse the breakdown of PFOA into carbon dioxide, fluorine and minerals.

So Wong and study co-lead authors Bo Wang, Lijie Duan and Kimberly Heck decided to create a composite of boron nitride and titanium dioxide that married the best features of the individual catalysts. In their new study, they showed the UV-A powered composites destroyed PFOA about 15 times faster than plain titanium dioxide photocatalysts.

By analyzing photocurrent response measurements and other data, Wong’s team learned how its semiconductor composite harvested UV-A energy to break apart PFOA molecules in water. In outdoor experiments using plastic water bottles under natural sunlight, they found the boron nitride-titanium dioxide composites could degrade about 99% of PFOA in deionized water in less than three hours. In salty water, that process took about nine hours.

PFOA is one of the most prevalent PFAS (perfluoroalkyl and polyfluoroalkyl substances), a family of compounds developed in the 20th century to make coatings for waterproof clothing, food packaging and other products. PFAS have been dubbed forever chemicals because they aren’t easily degraded and tend to linger in the environment. Wong said his team is assessing how well its composite photocatalyst works for breaking down other PFAS.

Molecular structure of perfluorooctanoic acid, or PFOA, one of the world’s most prevalent “forever chemical” pollutants.

He said the boron nitride and composite catalyst technologies have already attracted attention from several industrial partners in the Rice-based Nanosystems Engineering Research Center for Nanotechnology-Enabled Water Treatment (NEWT), which is funded by the National Science Foundation to develop off-grid water treatment systems.

The research was supported by the National Science Foundation (EEC-1449500), the National Major Science and Technology Program for Water Pollution Control and Treatment of China (2017ZX07401004), the Scientific Research Institutes of China (2019-YSKY-009) and the China Scholarship Council.