Australia’s research output in nanotechnology and nanoscience has increased rapidly in recent years, putting the country in a strong position among the leading nations in the field.

In the Nature Index, which tracks affiliations in research articles across 82 selected natural-science journals, Australia has risen from 12th place in 2017 (its lowest position in the field since 2015) to 8th in 2021, ahead of Singapore and Switzerland, in 9th and 10th place, respectively.

Australia’s leap in the global standings is unusually large among the leading ten nations. The leading seven have been largely unchanged since 2015; China overtook the United States in 2018 for first place — a position it has held ever since — and the United Kingdom and Japan have been jostling for fifth place since 2017, ahead of France, which has been uncontested in 7th place since 2015. 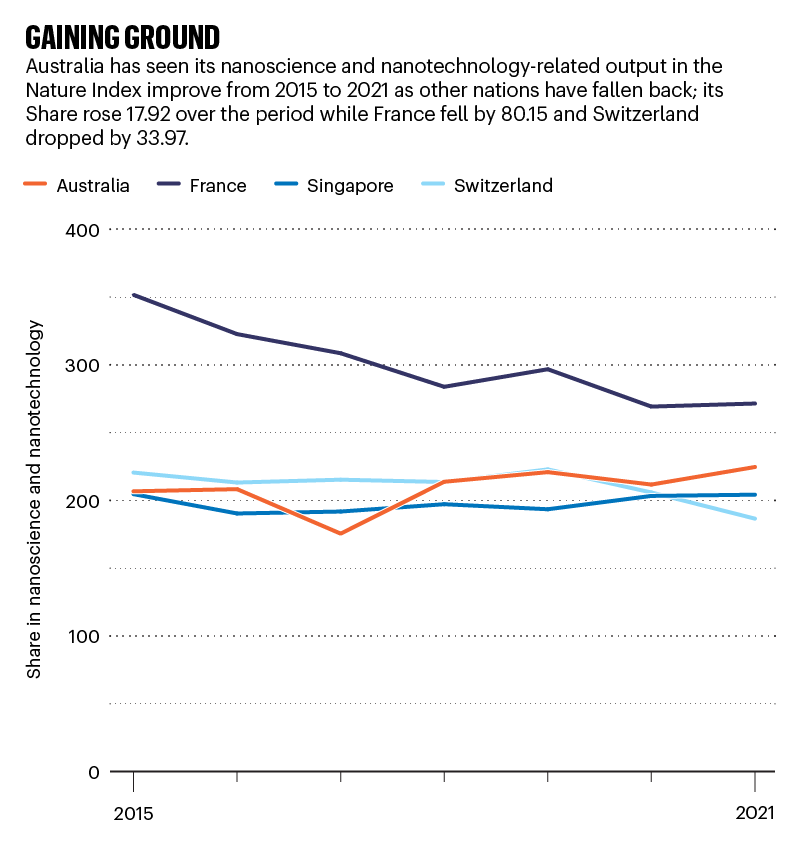 Strong investments in Australian nanoscience seem to be paying off. It is the only country apart from China to have more than one institution in Nature Index’s 25 fastest-rising list for nanoscience and nanotechnology-related output in 2020–21 (namely, UNSW and the Australian National University in Canberra). Germany, the United States and South Korea each have one institution in this list. China, which dominates, has 20.

Nature Index spoke to Mark Hutchinson, director of the Australian Research Council (ARC) Centre of Excellence for Nanoscale BioPhotonics at the University of Adelaide in South Australia, about what might be driving Australia’s recent success in the field, and what is needed to sustain its strong performance over the coming decades.

What gives Australia its edge in nanoscience and nanotechnology?

It started with some early discoveries in Australia, in the 1990s, around graphene materials. This created a critical mass of graphene-materials research, which generated an atmosphere in which some of the nano-capabilities of graphene could take off. That’s what really laid the foundations.

Scientists, academic bodies and people from industry could see the potential of nanoscience from that early research, so they all got together to put their case to federal and state governments for developing Australia’s nanoscience capabilities. Then followed a series of strategic government investments — one of which was my centre, established in 2014. The ARC created a Centre of Excellence for Convergent Bio-nanoscience and Technology that same year.

Before that, in 2011, the ARC also founded the Centre of Excellence for Engineering Quantum Systems, which has a great deal of nanoscience and engineering included. This has allowed scientists from fields such as biology, physics and engineering to get involved, and has encouraged international collaborations.

In each of these centres of excellence, you need to have international partnerships. At my own centre; we work with the Leibniz Institute of Photonic Technology in Germany and we also have nanomaterial manufacturing collaborations with the Chinese Academy of Sciences in Beijing.

It sounds like Australia spotted an area of research growth when it was relatively new and got a head start?

Yes, I think we’ve seen the brilliance of researchers and industry leaders in identifying nanoscience’s potential and getting an early win with the nanomaterials.

But it was more than that; everyone — from researchers at different universities to industry scientists and the government — started to ‘play nice’ together on this. The fact you have all of these centres of excellence is proof of this, because the ARC’s definition of such a centre includes deep and significant collaborations between all of these sectors. The centres simply wouldn’t exist without it.

I think that collaborative spirit was important, because it has made investments in nanoscience an easier sell.

Will Australia continue to rise in the rankings, or will it reach a natural plateau?

Will we continue to be strong in the field in the Nature Index? I don’t know. But what I can say is that Australia will absolutely be a dominant force for the translation of nanomaterials into economic benefit. Investments in quantum computing at UNSW will be a good example of this, but so too is the nanotube commercialization that’s come out of Deakin University in Melbourne. Nanomaterials in general are a strength. We will see more of our fundamental science cited in patent applications. So yes, I think we will continue to excel.

But will we continue with the rate of funding that the federal government has provided so far? I think we need to maintain that drive to stay at the cutting edge.

We also need to think about what the priorities of Australia’s new Labor government, elected in May, will be and who will be the best scientists to effectively communicate the case for nanoscience funding in a boardroom setting. Australia’s success in doing that in 1990s needs to be continued.

There are many nanoscience collaborations between China and Australia, have they been threatened by political disagreements?
China is a major collaborative partner with Australia across all fields of research, not just nanoscience. At the Centre for Nanoscale BioPhotonics, we have partners in China, but we also have partners in Germany, Canada, the United States and the United Kingdom. Australian scientists are inherently collaborative and the science that goes on between our countries exists beyond the current political challenges.

Where I do think we’ll see a change in Australia is where our students are coming from. Maintaining a steady flow of the best students is part of maintaining the skills pipeline for research. Pre-COVID-19, we had a substantial Chinese and Indian overseas-student population. How will that change after COVID? I don’t know, but it could have a big impact if it declines, so it’s something to watch.