Breast Cancer Cells Use Forces to Open up Channels Through Tissue

A new method reveals that cancer cells can spread by rapidly applying forces to tissue material.

Research to understand how cancers grow and spread has conventionally been done on two-dimensional, flat cultures of cells, which is very different to the three-dimensional structure of cells in the body. 3D cell cultures that incorporate tissue material have been developed, but the methods to measure how cancer cells use forces to spread have been lacking.

Now, researchers have developed a new method for 3D culture to accurately quantify how cancer cells generate forces to spread within tissue. ‘We have applied the method for investigation of early progression of breast cancer,’ says Juho Pokki, a principal investigator at Aalto University who led the research.

This study, a collaboration between scientists at Aalto University and Stanford University, was published in the journal Nano Letters.

A primary tumour can form inside the breast’s mammary duct, where the cancerous cells are confined by a special membrane, called a basement membrane. Breast cancer cells are larger than the pores in these membranes, so they must break through to spread to other tissues. Previously, researchers thought that cells use enzymes to dissolve membranes, but now it is understood that breast cancer cells use another mechanism involving cellular protrusions to pass through the membranes.

‘In this mechanism, breast cancer cells use forces generated by the protrusions to open up channels within the membrane material. Then, the cancer cells enter the surrounding tissue and may travel further to blood vessels to spread to the rest of the body. In fact, the blood vessels are also surrounded by a basement membrane. Breast cancer cells potentially use a similar mechanism to break through into those basement membranes,’ explains Pokki. ‘Professor Ovijit Chaudhuri’s group at Stanford originally found this protrusion mechanism in 2018. Collaboration with his group has been the key for the physiological significance of this work,’ says Pokki. 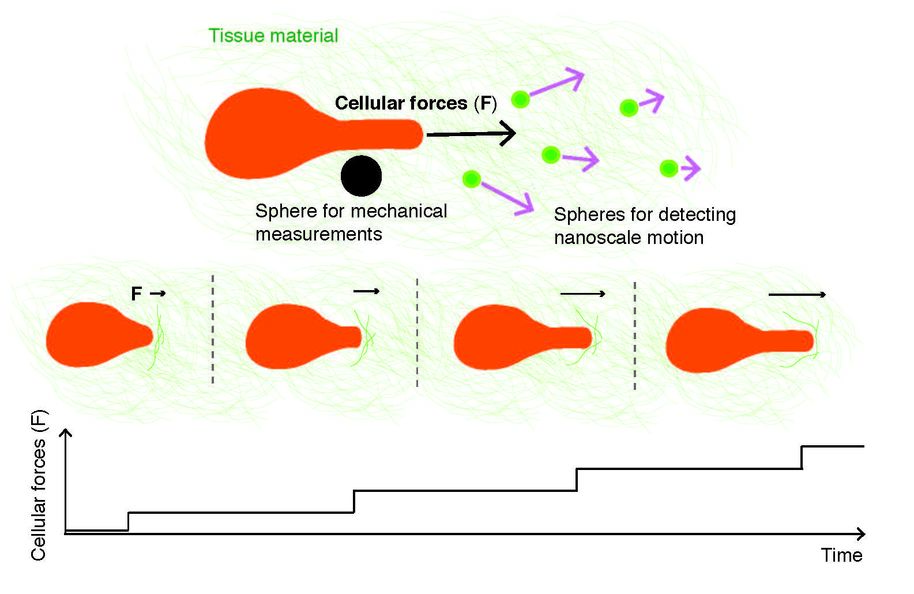 A new technique measures forces generated by cancer cells with a biological microscope that detects biocompatible spheres within the tissue material. Cellular forces are computed using information about two sphere types, one that detects nanoscale motion, and another that measures mechanical properties. The technique reveals that cancer cells generate forces in a stepwise manner, and the forces cumulate within the tissue material, surrounding a breast-cancer tumour.

The new study uses 3D cell cultures composed of breast cancer cells and standard basement membrane material. Within the 3D cultures, researchers embedded two types of biocompatible spheres: one type moved along with forces generated by cancer cells, and the other type measured force-constraining mechanics. A modified fluorescence microscope was used to take videos of these spheres and track them at nanoscales.

This allowed the researchers to measure the force pulses coming from cancer cells. ‘Previous studies had measured motion of cellular protrusions over longer periods of time, but our study showed that a lot can happen in just 15 minutes. We saw nanoscale movement and force pulses within a few seconds, which is startling. Further, these pulses accumulate, resulting in stronger forces applied on the membrane material,’ says Pokki.

‘This is currently the most accurate method for measuring how cellular forces are generated in 3D culture,’ adds Pokki.

Breast cancer is the most common form of cancer for women globally. Every year, over 350,000 women are diagnosed with breast cancer in the European Union alone.

Developing medication against breast cancer is costly, slow and often inefficient, since fewer than five percent of drug candidates that are selected using 2D cell cultures and animal experiments prove to be effective in human clinical trials.

‘Our methods provide more accurate computational data on cellular forces during invasion by breast cancer cells. Our group combines the methods with microscopy technology to make experiments in the area of 3D cell culture more reproducible. I believe technological developments will eventually boost pre-clinical research. We have already started a related project in the area of personalized cancer medicine,’ reveals Pokki.