Magnetic skyrmions are extremely small and stable swirls of magnetization, often referred to as ‘topological quasi-particles’ since an emerging stability embraces this spin ensemble. As such, skyrmions can be manipulated while retaining their shape. In ferromagnetic thin films, they can conveniently be created with an electrical current pulse or, even faster, with a laser pulse ‒ albeit, so far, only at random positions in the material. Skyrmions are scientifically interesting from two perspectives: On the one hand, magnetic skyrmions are envisioned as information carriers in future information technology. On the other hand, skyrmions in thin magnetic films may act as an ideal test bed to study the dynamics of topologically non-trivial magnetic quasi-particles. However, to make progress in this field, reliable generation of the magnetic skyrmion at controlled positions is required. A team of researchers, led by the Max Born Institute, has now achieved full nanometer-scale control of the skyrmion generation by two independent approaches employing He+-ion irradiation or using backside reflective masks.

In recent years, great advances have been reported in generating, annihilating, and moving magnetic skyrmions in magnetic thin films. A prime tool for investigating these nano- to micrometer-scale magnetic textures is to directly image them – either with visible light or x-rays. If we want to study the dynamical properties together with spatial characteristics, we must record a movie consisting of many image frames. However, directly recording a skyrmion movie on the relevant timescales of nano- or even picoseconds is hardly possible – the acquisition time required for a single frame is typically too long. This problem is commonly solved by employing repetitive stroboscopic measurements – so called “pump–probe experiments” – where the same process is repeated over and over while being imaged. To enable such time-resolved measurements, the dynamics of the magnetic skyrmion has to be controllable and deterministic. A team of researchers led by the Max Born Institute has now established two methods to reliably create skyrmions at desired positions and to guide their motion – essential steps towards recording videos of moving skymions.

A first method relies on irradiation of the magnetic film hosting the skyrmions with a focused helium-ion beam to flexibly create patterns of different shapes and sizes in the magnetic material. Importantly, this local modification with very light ions only affects the magnetic properties of the material while the film remains structurally intact. Employing helium ions, it is possible to predefine positions where skyrmions appear after triggering their creation with a short pulse of electrical current or laser light (see Fig. 1, where skyrmions are nucleated in two rows of isolated dots). In particular, the magnetic modification turns out to be gentle enough to even allow for a controlled detachment of the skyrmion from its generation site and its subsequent unimpeded motion. Moreover, by combining such a skyrmion creation site with a guiding channel, the team was able to show continuous motion of a magnetic skyrmion driven by electrical current pulses over tens of micrometers back and forth in the so-called magnetic racetrack – fully suppressing any undesired sideways motion, which is intrinsic to current-driven skyrmions.

In a second approach to predefine skymion nucleation sites, the researchers designed nanopatterned reflective masks on the backside of the magnetic material. These masks allow to control the excitation amplitudes reached when hitting the magnetic film with a laser, resulting in nanometer-scale precision on the spatial distribution of magnetic skyrmions created (see Fig. 1, where skyrmions are nucleated on a square grid). As the masks are prepared on the backside of the magnetic film opposite to the laser-illuminated surface, the approach retains free frontside access to the magnetic film for, e.g., detection of the skyrmions. The application of this backside mask approach with its unhindered access to the magnetic film can easily be transferred to other photo-induced switching phenomena in order to add nanometer control on the switched areas.

The results of these studies may also impact research on novel computing and data storage concepts. Over the past decades, we have observed a demand for ever increasing data-storage densities and efficient computing capacities, evoking huge industrial interest in exploring magnetic effects which are active on ultrafast and ultrasmall scales for technological applications. One possible candidate as next-generation information carrier is the magnetic skyrmion.  With the achieved level of control for skyrmion generation and motion and the potential for even further miniaturization, the technology may ultimately pave the way for possible future devices, such as skyrmion racetrack memories, shift registers, and skyrmion logic gates. 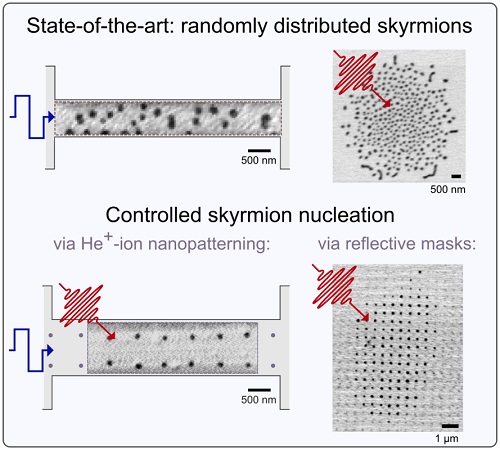 Figure 1: From randomly distributed skyrmions to nanometer position control in magnetic thin films: Two approaches either employing helium-ion irradiation or back-side reflective masks allow for spatial control of skyrmion creation and motion on the nanometer scale. The black–white contrast represents the film’s magnetization pointing either “up” or “down” with respect to the plane. The skyrmions appear as black dots on the background of the otherwise homogeneously magnetized (white) thin film. The skyrmions are created either by electric current (blue arrow) or laser pulses (red arrow). In case of unpatterned thin films, they randomly distribute in the film, while they form at predefined positions in a square lattice using the described patterning methods.