What happens when people unknowingly eat, drink or inhale nearly invisible pieces of plastic? Although it’s unclear what impact this really has on humans, researchers have now taken a step toward answering that question.

Plastic can’t be avoided in daily life. Many products that we bring into our homes are made of plastic or wrapped in plastic packaging — all of which could release micro- and nanometer-sized pieces that could be accidentally consumed or inhaled. Although the health risks to humans from taking in nanoplastics isn’t entirely clear, researchers recently have shown that particles less than 100 nm-wide can enter animals’ blood and organs, causing inflammation, toxicity and neurological changes. So, Zongwei Cai, Chunmiao Zheng and colleagues wanted to examine the molecular-level and metabolic impacts when human lung and liver cells are exposed to similarly sized nanoplastics. 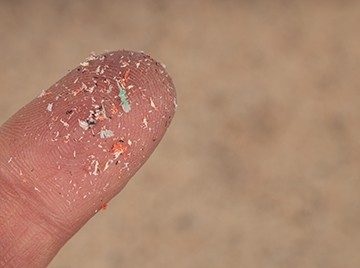 Nanoplastics (smaller than the microscale particles shown here) can enter human liver and lung cells in lab dishes and disrupt their normal processes.

The researchers cultured human liver and lung cells separately in laboratory plates and treated them with different amounts of 80 nm-wide plastic particles. After two days, electron microscopy images showed that nanoplastics had entered both types of cells without killing them.

To learn more about what happened to the cells, the researchers looked at the compounds released by mitochondria — crucial energy-producing organelles that are thought to be sensitive to nanoplastics — during metabolism. As liver and lung cells were exposed to more nanoplastics, they produced more reactive oxygen species and different amounts of nucleotides, nucleosides, amino acids, peptides and carboxylic acids, indicating that multiple metabolic processes were disturbed. In some cases, mitochondrial pathways appeared to be dysfunctional. These observations demonstrate that while nanoplastics exposure doesn’t kill human lung and liver cells, it could disrupt critical processes, potentially causing negative impacts to organs, the researchers say.

The authors acknowledge funding from the Hong Kong General Research Fund and the National Science Foundation of China.