A new triple-acting antibiotic agent has managed to break through the biofilm extracellular matrix – a protective structure built by bacteria – and eliminate more than 50% of the pathogens in one shot.

Persistent lung infections, chronic wounds, and healthcare-associated infections are typically much more difficult to treat than other types of bacterial infections. This is because they are often caused by biofilms, that is, colonies of microbes —mainly bacteria— that grow together in a self-produced matrix that protects and isolate them from the external environment.

Now, a new triple-acting antibiotic agent has managed to break through the biofilm extracellular matrix —a protective structure built by bacteria— and eliminate more than 50% of the pathogens in one shot, according to a study published in the journal npj Biofilms and Microbiomes. The study was led by Eduard Torrents, lecturer at the Department of Genetics, Microbiology and Statistics of the Faculty of Biology and head of the group on Bacterial Infections: Antimicrobial Therapy of the Institute for Bioengineering of Catalonia (IBEC).

This extracellular matrix exacerbates antibiotic resistance, one of the biggest threats to global health, according to the World Health Organization (WHO), since killing the bacteria inside the film is up to a thousand times harder. Biofilm infections are therefore the most important nonspecific mechanism of antimicrobial resistance.

Attacking these microbes using only antibiotics is not enough. There is a need for tools that break down the extracellular matrix to access and kill the bacteria inside. The first author of this study, which has achieved this milestone, is Núria Blanco-Cabra, postdoctoral researcher of the group led by Eduard Torrents at the UB and IBEC. The study was carried out together with scientists from CIDETEC (Basque Country). 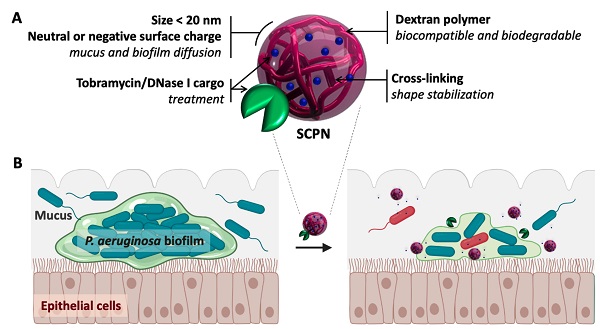 The new triple-acting antibiotic agent has managed to break through the biofilm extracellular matrix —a protective structure built by bacteria.

The study focused on the bacteria Pseudomonas areuginosa, a pathogen that often grows in biofilms in the lungs of those patients with cystic fibrosis or chronic obstructive pulmonary disease (COPD), causing persistent infections. “We grew biofilm cultures in vitro, using a technique that resembles to the way in which they exist and grow in nature”, added Torrents. In clinical practice, these infections are usually treated with an antibiotic called tobramycin. However, its effectiveness is limited by its inability to penetrate the film. This happens because tobramycin, which is positively charged, is neutralized by the extracellular matrix (with a negative charge).

The researchers loaded the antibiotic into negatively charged nanoparticle carriers. This could neutralize the positive charge before the drug reached the biofilm, which enabled it to break the extracellular matrix and kill the bacteria inside. What is more important, these carriers —built by dextran-based single chain nanoparticles— were able to transport up to 40% of the weight of the antibiotic. “Many of the previously studied nanotransporters have only been able to sustain a small load of the target compound, which has prevented their clinical use. We managed to overcome this obstacle”, says Torrents.

The antibiotic-loaded nanocarriers were also coated in an enzyme called DNase I. One of the compounds that holds bacteria biofilms together is structural DNA found throughout the extracellular matrix. DNase I can break down this “glue”, causing the matrix to loosen, and allowing the antibiotic to penetrate the biofilm even further.

“By combining an antibiotic with a couple of agents that break the biofilm up, we have created a drug that is more powerful than the antibiotic alone which kills the bacteria that lives inside the film”, notes Eduard Torrents, principal researcher of the study.

Using microscopy images, the researchers found that the new agent had not only dissolved the structural DNA in the extracellular matrix, but also that it was acting on and killing the bacteria inside. With just a single application, they reduced the bacterial biomass by more than half.

"Having achieved such significant biofilm clearance with a single dose of our agent, we predicted that a full course of antibiotics could significantly reduce the burden of these infections, which are extremely difficult to treat".

In future clinical uses, this agent could be administered in multiple doses, as is standard practice with antibiotics. The next step is to work on the clinical validation of this system. Its commercialization would represent a decisive advance in the treatment of biofilm infections, the global economic cost of which currently amounts to 4 billion dollars a year.

Transforming The Way Cancer Vaccines Are Designed and Made