Engineers at Duke University have developed a device that uses sound waves to separate and sort the tiniest particles found in blood in a matter of minutes. The technology is based on a concept called “virtual pillars” and could be a boon to both scientific research and medical applications.

Tiny biological nanoparticles called “small extracellular vesicles” (sEVs) are released from every type of cell in the body and are believed to play a large role in cell-to-cell communication and disease transmission. The new technology, dubbed Acoustic Nanoscale Separation via Wave-pillar Excitation Resonance, or ANSWER for short, not only pulls these nanoparticles from biofluids in under 10 minutes, it also sorts them into size categories believed to have distinct biological roles.

The results appeared online November 23 in the journal Science Advances.

“These nanoparticles have significant potential in medical diagnosis and treatment, but the current technologies for separating and sorting them take several hours or days, are inconsistent, produce low yield or purity, suffer from contamination and sometimes damage the nanoparticles,” said Tony Jun Huang, the William Bevan Distinguished Professor of Mechanical Engineering and Materials Science at Duke.

“We want to make extracting and sorting high-quality sEVs as simple as pushing a button and getting the desired samples faster than it takes to take a shower,” Huang said.

Recent research indicates that sEVs are comprised of several subgroups with distinct sizes (e.g., smaller than 50 nanometers, between 60 and 80 nanometers, and between 90 and 150 nanometers). Each size is believed to have different biological properties.

The recent discovery of sEV subpopulations has excited researchers because of their potential to revolutionize the field of non-invasive diagnostics, such as the early detection of cancer and Alzheimer’s disease. But the particles haven’t found their way into clinical settings yet.

Huang said this is largely due to the difficulties associated with separating and isolating these nano-sized sEV subpopulations. To meet this challenge, Huang, his doctoral student Jinxin Zhang, and collaborators at UCLA, Harvard, and Magee-Womens Research Institute, developed the ANSWER platform. 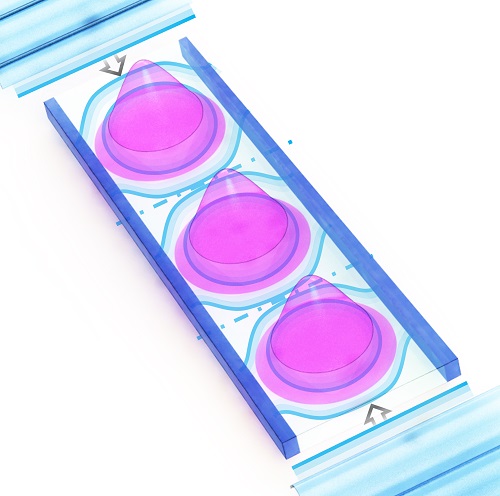 A graphical representation of the sound wave forces at work that create “virtual pillars” to gently separate and sort nanoparticles from biofluids.

The device uses a single pair of transducers to generate a standing sound wave that envelops a narrow, enclosed channel filled with fluid. This sound wave “leaks” into the liquid center through the channel walls and interacts with the original standing sound wave. With careful design of the wall thickness, channel size and sound frequency, this interaction creates a resonance that forms “virtual pillars” along the center of the channel.

Each of these virtual pillars is essentially a half-egg-shaped region of high pressure. As particles attempt to cross over the pillars, they get pushed toward the edges of the channel. And the bigger the particles, the bigger the push. By tuning the series of virtual pillars to create nuanced forces on the traveling nanoparticles, the researchers can precisely sort them by size into a variety of groups determined by the needs of the experiments at hand.

“The ANSWER EV fractionation technology is the most advanced capability for precise EV fractionation, and it will significantly impact the horizon of EV diagnostics, prognostics and liquid biopsy,” said David Wong, director for UCLA Center for Oral/Head & Neck Oncology Research.

In the new paper, the researchers demonstrate that their ANSWER platform can successfully sort sEVs into three subgroups with 96% accuracy for nanoparticles on the larger end of the spectrum and 80% accuracy for the smallest. They also show flexibility in their system, adjusting the number of groupings and ranges of sizes with simple updates to the sound wave parameters. Each of the experiments only took 10 minutes to complete, whereas other methods such as ultra-centrifugation can take several hours or days.

Moving forward, the researchers will continue improving the ANSWER technology so that it can be efficient in purifying other biologically relevant nanoparticles such as viruses, antibodies and proteins.