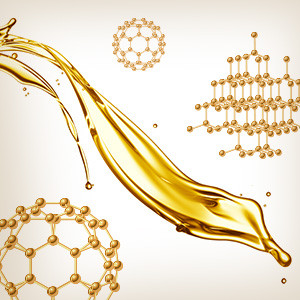 Some engine oils presented to the market contain nanomaterials additives to improve their performance in lubricating the engine. Fullerene and nanodiamond are among the most commonly used nanomaterials in engine oils.

Development in engines with high efficiency results in the need for new engine oils and lubricants in the market. These new lubricants must have higher durability and better performance. Nanomaterials are among the important parameters in strengthening the structure of engine oils, to the extent that there are many commercial engine oils containing nanomaterials presented to the market. However, there are challenges and technical obstacles in the development of commercial engine oils containing nanomaterials, which require further investigations.

Nanoparticles are the most commonly used materials in nanotechnology. Diamond nanoparticles have the largest share in engine oils. Diamond nanoparticles are classified into 3 groups of diamondoid, diamond-like carbon (DLC), and nanodiamond. Nanodiamond is used as additive in engine oils. These particles are usually less than 10 nm in size and they increase resistance to fatigue. Their small dimension decrease friction to the minimum level. However, these particles have some unwanted effects in addition to their advantages, so companies use specific formulation to reduce the side-effects.

Fullerene is one of the most important options for the production of engine oils after nanodiamond. Other particles with similar structure to fullerene can have such properties too. Tungsten disulfide (WS2) is one of those materials. Like fullerene, this component has a cage-like structure but it is larger than fullerene. Fullerene and tungsten disulfide can enter hydrocarbons and stay there in a stable condition. Tungsten disulfide cages can decrease friction like a lubricant. Tungsten disulfide can be used as a dry lubricant. Dry lubricants can be used in the interface of two surfaces without needing liquid environment such as oil or water. Ability to work in very high temperature is one of the advantages of this type of lubricant. Studies on commercial engine oils containing cage-like tungsten disulfide show that properties such as increasing in resistance against fatigue, increasing the durability of the engine, reducing fuel consumption, and preventing the sedimentation of pollutant components in the engine are among the advantages of using this material.

Hexagonal boron nitride (h-BN) is a polymorph substance used in lubricants, and it has very high operation temperature. This substance has a thin layer structure like graphene, and it is known as white graphene. Another advantage of boron nitride is the possibility to be used in vacuum because it does not need water or gas molecules.

Molybdenum disulfide (MS2) is another additive used to decrease friction. Contrary to graphite, this substance does not absorb water. Addition of water to graphite reduces lubrication efficiency.