Crisp Packets Can be Recycled Thanks to Nanotechnology 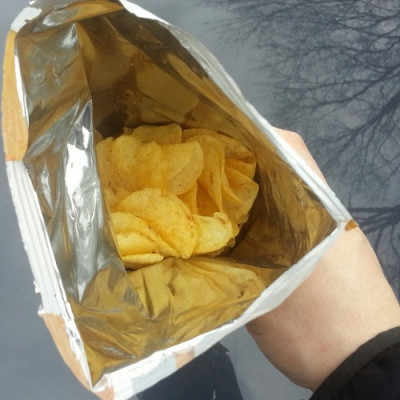 Crisp packets are usually made of plastic with a thin metallic coating. The metal layer acts like a barrier against oxygen and water to keep the quality of the crisp until consumption; however, it has a long life in nature. Oxford University researchers have succeeded in providing nano-coated packets which can make them recyclable.

When people took to posting their crisp packets back to manufacturer Walkers to protest that they weren’t easily recycled, the firm took notice and launched collection points for recycling. But the reality is the special scheme has addressed just a tiny fraction of the waste mountain – 3 million of the 4 billion bags the company sells annually just in the UK – and they still aren’t accepted by household recycling schemes.

Researchers say crisp makers may have to come up with a new, greener alternative. The metalized films used for today’s crisp packets, chocolate bars, and much other food packaging are great for keeping the contents dry and cool, but hard to recycle as they are made from several layers of plastic and metal fused together.

“The crisp packet is quite a hi-tech piece of polymer packaging,” says Dermot O’Hare of the University of Oxford. However, recycling it is difficult. While technically the metalized films can be recycled at an industrial level, says UK waste agency WRAP, it isn’t economically viable to do so widely yet.

O’Hare and his team’s proposed alternative is a very thin layer, called a nanosheet, made from amino acids and water, applied to a film of plastic (polyethylene terephthalate, or PET, which most plastic water bottles are made of). The benign building blocks of amino acids and water appear to make a material safe for use with food, says O’Hare: “In terms of the chemistry, that was the breakthrough, making synthetic nanosheets using non-toxic materials.” But he says there will be a long regulatory process, and we shouldn’t expect to see the material in packaging for at least four years.

Part of the challenge in designing the material was meeting industry demands for a good barrier to gases, to avoid contamination and keep the product fresh. To make the nanosheets effective, O’Hare’s team created a tortuous pathway, a sort of maze at a nano level that makes it hard for oxygen and other gases to diffuse through.

As an oxygen barrier, it appears to perform around 40 times better than metalized film, and the material also fared well in the industry’s crumple test, which involves flexing and twisting it. The film also has the big advantage of being monomaterial packaging, in other words only having one material, the PET, which can be widely recycled.

The new film is up against rivals, including clay-based materials that are mined, though their natural origin means they suffer from concerns over impurities. The race is on to be the greener material of the future, with companies such as Walkers promising fully recyclable or biodegradable packaging by 2025.