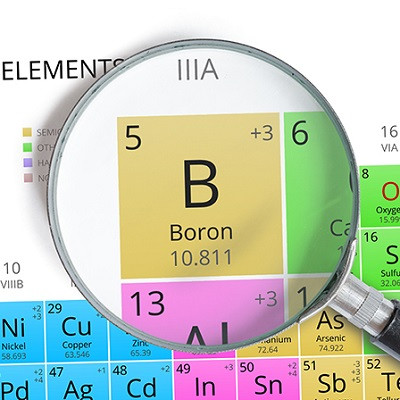 Borophene is a two-dimensional material with promising properties, some of which outweigh graphene. However, unlike graphene, it has not attracted researchers and research institutes consideration. The exploitation of borophene potential can make it the closest rival to graphene in industrial applications.

The 2010 nobel price awarded to the researchers working on graphene structures gained scientists consideration so that various two-dimensional (2D) graphene-like materials are now being investigated. Borophene is one of these 2D compounds which is the crystalline allotrope of boron, produced in single-layer form.

Recently, this material has been synthesized by various methods, and its properties have been characterized. Borophene is a material with anisotropic properties, which means some of its properties depend on the orientation of the material. Recent studies have shown that the borophene Young's modulus in chair configuration is around 400 N/m, which is higher than graphene. Therefore, borophene can be considered as a rival for graphene. Moreover, it's Young's modulus in the zigzag configuration is about 170 N/m. Borophene can also have metal properties depending on the structural orientation and may have a bandgap.

Chemical modification is one of the effective methods for changing the structure of 2D materials. The bandgap can be modified in graphene, silicone, and germanene aided by hydrogenation and fluorination processes. Hydrogenation changes borophene structure in a way that its bandgap reaches zero. However, the results of fluorination are a bit complex, and fluorine functionalization leads to the formation of band structure on the borophene surface.

1-Battery
The superior electrical conductivity of borophene has made it a suitable choice for use as an anode in metal-ion batteries. In fact, one of the most important applications of this material is in electrode production for batteries. High capacity, proper voltage, good electrical conductivity, and considerable ionic conductivity are among the properties required for the electrodes. Borophene is a very light material that has high surface activity. Borophene properties have made it a promising candidate to be used in ion-metal (alkaline) batteries. In addition, borophene is an appropriate alternative for the development of lithium-ion batteries owing to the strong interaction between lithium and borophene. There are some challenges to developing lithium-sulfur batteries due to the rapid drop in capacity. To address this problem, sulfur should be controlled by a substance that has neither very strong nor very weak interactions with polysulphides. Graphene has a weak interaction with polysulphides, so it is not a good candidate. A kind of borophene structure can have a much stronger interaction with polysulphides compared to graphene. Therefore, it may be used to develop these types of batteries.

2-Hydrogen Storage
Borophene has a high capacity to absorb hydrogen. Consequently, it can be used to store hydrogen in vehicles equipped with fuel cells.

3-Supercapacitor
A recent study showed that four layers of borophene had a great performance for supercapacitor production. This supercapacitor still keeps 88% of its initial capacity after 6000 times of charging/discharging cycles, which is promising stability.

4-Catalyst
Some publications have reported the catalytic properties of borophene, and research on the application of this material as a catalyst in the regeneration of oxygen and hydrogen production is in progress.

5-Sensing
Several articles have been published, in which borophene has been employed for the detection of ethanol, formaldehyde, and hydrogen cyanide. These studies showed that borophene had a high potential for detecting toxic gases.

Prospects for Borophene
Although borophene has been discovered much sooner than graphene, it has not attracted scientific consideration as graphene. Graphene is on the path to market, while borophene is a material with high but unknown potential. Despite the fact that the number of borophene citation rate in scientific publications has considerably grown in recent years, it is still at the 31st rank among all the reported nanomaterials in the articles, according to Statnano database.

On the other hand, borophene is ranked 35th among other nanomaterials in terms of the number of registered patents in 2018, while graphene is ranked third next to nanoparticles and nanotubes. Therefore, borophene can be considered as a material with unique properties, showing a high potential for solving industry challenges. Although this nanostructure has not yet attracted enough attention, more consideration has been given to it in recent years. If the potential of this substance is exploited, borophene can be a serious rival for graphene.