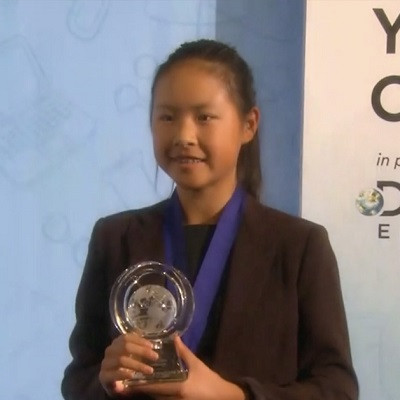 The annual “3M Young Scientist Challenge” is the USA’s premier science competition for middle schoolers, inviting them to submit their unique solutions for everyday problems and compete with each other for winning $25,000 and an exclusive 3M Mentorship. This year, Kara Fan, a 14-year-old from California, won the challenge with her nanoparticle liquid bandage which can curb the overuse of antibiotics.

Hundreds of students in fifth to eighth grade submitted ideas to the competition, which encourages middle schoolers to come up with projects to tackle global problems. But only one won the top prize of $25,000.

"I feel really shocked and surprised but really excited at the same time," Fan said after learning she had won. "My project is important because it reduces the overuse of antibiotics."

After two days of mind-twisting challenges and working one-on-one with world-renowned scientists more than twice their age, the 10 finalists presented their projects in front of 3M and Discovery Education executives. Caroline Crouchley, who got second place, created a sustainable train that she told CBS News correspondent Nikki Battiste is safer and more efficient than Elon Musk's Hyperloop.

"Four million children develop asthma every year due to air pollution from cars and trucks, and there are 11,000 new cases every day," she said. "So I want to prevent all this from happening."

"You want to make the air we breathe safer?" Battiste asked.

"Yeah … I designed, developed a new train idea that can use renewable energy sources instead of fossil fuels, so it would help the environment," Crouchley said.

Another student, Faraz Tamboli, created a device that translates sign language into voice and voice into sign language.

"When my dad was around my age … there was this kid … and he always wanted to play with my dad. But since he was aphonic, he couldn't talk to my dad and tell him that he just wanted to play with him. So my dad got scared and ran away," Tamboli said.

"I thought, 'Why can't I translate their only way of communication? Sign language.' And …  started thinking of how to recognize the hand and its gestures and figure out the movement of the hand," he said.

Before their final presentations, the young scientists toured 3M's Innovation Center to see some adult projects, like an echo-free chamber. The young minds learned a lesson not just in science, but in life.

"My takeaway from this project is that if you work well with other people then great things happen," Fan said.

Past winners of the competition have met the president, been featured in Forbes's 30 Under 30 list, spoken before Congress and given TED Talks.