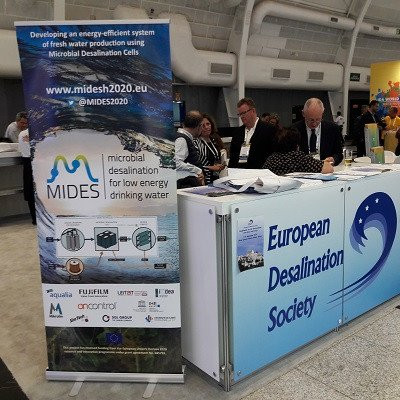 “Microbial Desalination for Low Energy Drinking Water” is a project supported by Horizon 2020, running from 2016 to 2020 with an overall budget of €8.02 million – 79 percent is the EU contribution. This project seeks to develop the world’s largest demonstrator of an innovative low-energy technology for producing potable water based on Microbial Desalination Cells (MDC), for shortages of clean water are alarmingly exacerbating and must immediately be overcome before turning into a real threat.

As the biggest EU Research and Innovation program, Horizon 2020 has made available a fund of around €80 billion over 7 years from 2014 to 2020 to take great projects from the lab to the market with the emphasis on excellent science, industrial leadership, and tackling societal challenges for driving economic growth and creating jobs.

“Microbial Desalination for Low Energy Drinking Water”, called the MIDES project, is one of the promising projects of Horizon 2020 which aims to develop an energy-efficient system of freshwater production using Microbial Desalination Cells (MDC) either as stand-alone or as pretreatment step for reverse osmosis (RO), since shortages of freshwater resources for drinking, industrial use, and irrigation are going to give rise to one of the most vital global challenges if they are not dealt with quickly.

Coordinated by FCC Aqualia SA – headquartered in Madrid, Spain – this project has been running from April 2016 and will continue until September 2020 with an overall budget of €8.02 million, 79 percent of which is the EU contribution. The MIDES project combines key areas of expertise in water and technology innovation as a consortium of ten companies and organizations from seven countries listed in the table below.

Table 1. Participants of the MIDES project and their EU contribution

The world’s largest demonstrator of the innovative MDC technology will be run by this project, and demonstration sites are currently planned to be implemented in Chile, Spain, and Tunisia. As illustrated in the following flow chart, the MIDES technology has various sections that need to be worked on, in order to be developed. This project focuses on breaking down existing barriers to the development of MDC technology, including low desalination rate, high manufacturing cost, biofouling and scaling problems on membranes, optimization of the microbial-electrochemical process, system scaling up, and economic feasibility of this technology; most of which are being addressed by innovative nanostructured electrodes, antifouling membranes containing nanoparticles with biocide activity, electrochemical reactor design and optimization, microbial electrochemistry and physiology expertise, and process engineering and control.

Figure 1. The Flow Chart of the MIDES Technology.

Hence, nine work packages have been defined for the MIDES project, each of which to be accomplished within its predicted timeline. During the first three years of the project, the components of the MDC including electrodes and membranes were developed, the process integration and pre-pilot validation together with the process simulation were performed, automation and control were implemented on the technical side, the MDC pilot plant was designed, and the construction began. On the market side, the MIDES Business and Exploitation Plan was prepared, and a Business Plan Development workshop was organized in collaboration with the Common Exploitation Booster service by the EC.

Since the social acceptance of purified water through desalination is increasing as a result of the dissemination activities of the project, it is expected that cities of the future will widely use comprehensive wastewater treatment plants to produce electricity and desalinate by means of an exclusive intelligent management and control system.

In terms of the socio-economic impacts and societal implications of the MIDES project, MIDES directly contributes to the economic growth of the desalination market, especially across the European Union, and to water-stressed areas in particular; because it provides a unique system for both water desalination and wastewater treatment. Improving the quality of life by increasing clean water resources while reducing costs, creating new employment opportunities without endangering existing jobs in the water industry, and minimizing the contaminants in seawater and wastewater by means of an energy-efficient innovative process (e.g., MDC combined with RO) are among other benefits of this project.

The MIDES consortium inaugurated the first project demonstration site at the Aqualia Racons Brackish Water Desalination Plant in Denia, Spain, on November 27, 2019. According to Victor Monsalvo, the Head of Eco-efficiency of Aqualia, it was the first time that biotechnology was being used for a sustainable desalination process, which also had the world’s lowest energy consumption for a plant of such scale.

The goal of this demonstration site is producing 150 L/h of desalinated water using less than 0.5 kWh/m3 of energy, while other desalination technologies involve significant energy consumption, with RO units requiring at least 3 kWh/m3 of electricity. Microbial desalination cells – on which the MIDES technology is based – can produce around 1.8 kWh of bioelectricity while treating 1 m3 of wastewater, which is then used to remove the salt content of the seawater and, therefore, reduces the required energy for desalination.

The Denia demo site provides potable water in real environment conditions by treating brackish water using advances in ultrafiltration pre-treatment, MDC application, disinfection, and remineralization. A ceramic microfiltration process has also been designed to pretreat the Racons River’s raw water, which is a complex water source with dense organic content and high membrane fouling capacity. “This first plant in Denia will optimize the process and serve as a reference site in the progress of this breakthrough solution. We look forward to publishing demo site results in early 2020, and fully exploring our MDC capabilities,” added Mr. Monsalvo.

Countries with access to salty or brackish water sources, but without the required power infrastructure for conducting conventional desalination, are estimated to substantially benefit from such low-energy drinking water production processes as MIDES. What is more, this proprietary process also curbs the environmental impact of carbon-rich compounds that would otherwise be discharged into natural water sources. The MIDES consortium is now planning to establish two other demo sites – one in Spain and one in Chile – for supporting different water conditions.