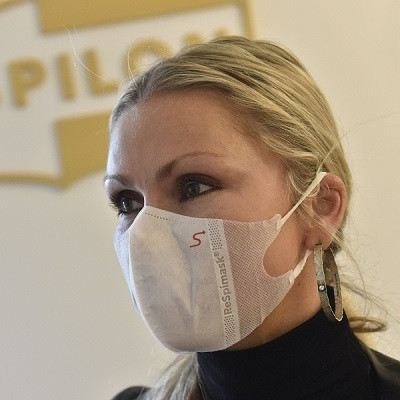 Czech nanofiber technology firm Respilon Group says it has developed revolutionary masks capable of isolating and killing viruses, such as the one currently affecting China.

Czech nanofiber technology firm Respilon Group says it has developed revolutionary masks capable of isolating and killing viruses, such as the one currently affecting China and the world. The product ReSpimask® provides effective protection of the human respiratory tract against air pollution, viruses, and bacteria, as it captures 99,9% of airborne particles. ReSpimask® is the only face mask in the world to use the latest nanofiber technology with a three-layer membrane.

According to norms and standards, a facemask is defined as a product that protects the surroundings of the wearer. That means that it captures the germs which are exiting the wearer so that they do not spread in a room or the surrounding space in general.

This is for example why a doctor wears a facemask – he is protecting his patient against his potential germs. This is why facemask construction is not a perfect fit for the face and its filter is very weak, it just protects from droplets going out of the wearer’s mouth.

Respirators and masks, which are described as a labor protective product, are suited for capturing solid particles from the air. They have nothing in common with filtrating pathogens.

The presence of nanofibers makes the face mask capable of protecting the wearer from his surroundings and vice versa. Naturally, however, the facemask also needs to have a slightly different shape in order to be effective.

When this is done, respirators, in combination with the nanofibers have the ability to also stop viruses in a very efficient way. Products of Respilon protect not just the surroundings from the wearer, but also the wearer from the outside infection threats. So it has both functions.

The new mask from Respilon will not only trap the virus but also destroy it. For this feature, the company is recently working on the project with an Israeli partner, who has the patent to make the copper dioxide (CuO) nanoparticles that are present in the fibers. It is from these particles that the company Respilon is making the non-woven material.

A new respiratory mask will be based on combining the textile together with the copper dioxide particles and with nanofibers. The copper dioxide layer in the mask should kill the virus immediately when the two come into contact - this is the first barrier of the mask.

Read the original article on CzechTrade.