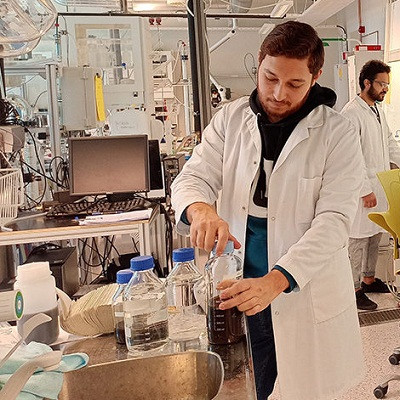 Two weeks ago, doctors at St. Olavs Hospital in Trondheim were running out of reagents needed to do COVID-19 tests. They asked colleagues at NTNU to develop a backup solution. Now, Norway is gearing up to use the new approach to test 150,000 people a week after Easter.

Tiny iron oxide nanoparticles coated with silica may seem like an unlikely player in enabling Norway to fight the coronavirus outbreak.

But it turns out these particles, when coated with silica, have a strong affinity for RNA, the genetic material inside the virus that causes COVID-19.

Researchers at NTNU’s Department of Clinical and Molecular Medicine and the Department of Chemical Engineering in collaboration with St. Olavs Hospital are building on this affinity in developing a test method that uses the magnetic particles.

The problem for Norway and countries across the globe is that the reagents needed to test for COVID-19 are in short supply. In conventional tests, reagents are used to extract RNA from the virus so it can be identified, said Professor Magnar Bjørås at NTNU’s Department of Clinical and Molecular Medicine in a webinar Monday evening.

“We can then identify the genetic code from the RNA and compare it to the coronavirus,” Bjørås said. The researchers tested the accuracy of their method by running tests from patients in parallel with commercial tests. Bjørås said the new method is more sensitive than commercial tests.

Bjørås said the lab at NTNU’s Department of Chemical Engineering that is making the magnetic particles can make 30-40 000 tests a day, a rate that can be increased after Easter. The plan is to scale up to be able to produce a minimum of 150 000 tests per week, he said. Robots can also help run parts of the test to speed up the testing process.

Gunnar Bovim, former NTNU Rector who is a professor of medicine and adviser at the university, is working with the Norwegian Institute of Public Health, the Directorate of Health and the South-Eastern Norway Regional Health Authority on ways to identify the bottlenecks that are limiting testing capacity for the coronavirus in Norway.

The group is now mobilizing to bring the new testing method to laboratories across the country after Easter. The idea is to test as many people as possible to see how much the Norwegian government’s stringent measures to control the virus are having an effect.

“If we can get the diagnostics up, it will be easier to monitor how the different measures are working,” Bovim said during the webinar. The maximum number of tests that Norway has been able to run to date in a week is 30 000, he said.

Not a matter of simple logistics

It’s one thing to have the tests themselves — there is also a great need for personnel who can help with the tests, or machines to help run the tests, or basic supplies, such as swabs for taking samples, personal protective gear, test tubes and reagents, Bovim said.

Not enough of any one of these pieces of the puzzle could pose a major bottleneck to the entire testing process, he said. “It’s not just a matter of simple logistics,” Bovim said.

Bovim and his team sent an email at noon on Monday to a range of Norwegian businesses and industries, including veterinarians, the fish and meat industries and other universities and research institutes to see if they could help. “We have had a lot of responses already,” he said.

One issue that has been raised is whether or not private laboratories could be involved in processing the tests.

“Private people have offered laboratories,” Bovim said. “But there are issues with information security, document security and logistics. That is why our strategy is to get people from private companies to work in hospitals and university laboratories.”

The group is recommending that laboratories in Oslo, Bergen, Trondheim, Stavanger and Tromsø use the magnetic balls produced at NTNU as an extraction agent and run the tests.