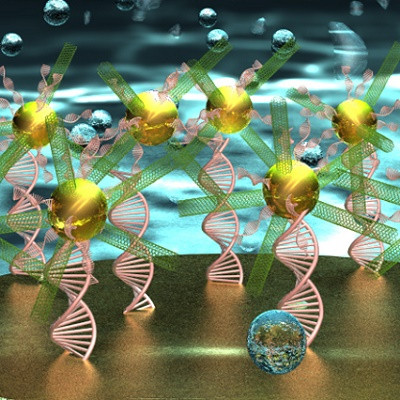 Disease detection at an early stage is one of the biggest challenges biochemists and materials scientists are trying to meet by combining their expertise at Missouri S&T. The researchers used nanotechnology in biomedical diagnostics – a process called nanodiagnostics – to create a new, ultrasensitive DNA biosensor. The new sensor could potentially detect DNA-based biomarkers for early diagnosis of cancer and genetic disorders, as well as monitor patient responses to therapies.

A basic electrochemical biosensor consists of a biological recognition element, a signal converter, and a processor. These biosensors detect, transmit, and record information about biological substances, such as nucleic acids (DNA and RNA), proteins, antibodies, antigens, and other biological components, like glucose.

“Biosensing with nanomaterials has the advantages of greater sensitivity and faster response than traditional analytical methods that require today’s medical devices and time-consuming molecular amplification techniques,” says Dr. Risheng Wang, assistant professor of chemistry at Missouri S&T and principal investigator of the study.

The researchers made the new biosensor from carbon nanotubes and gold nanoparticles, which give it a 3-D radial shape similar to that of a sea urchin. Wang says the biosensor generated a remarkable electrochemical response.

“Because the combination of carbon nanotubes and gold nanoparticles produced a larger-than-normal, super-conductive contact area, we found this biosensor could detect the ultralow-abundance nucleic acids in complex biological media,” says Dr. Wenyan Liu, assistant research professor of chemistry at Missouri S&T. “It was also highly selective in discriminating single mismatched DNA from fully matched DNA. This type of nanodiagnostic system is a potential candidate for point-of-care medical measurements because of its excellent stability and possibility of miniaturization.”

The study, “Label-free and Ultrasensitive Electrochemical DNA Biosensor Based on Urchinlike Carbon Nanotube-Gold Nanoparticle Nanoclusters,” was published by ACS (American Chemical Society) Publications in the April 7, 2020, journal, Analytical Chemistry, and featured on the cover of the issue.

S&T collaborators include corresponding author Liu, and co-author Dr. Shou Han, a former post-doctoral fellow in chemistry who is now at the University of Missouri-Kansas City. Dr. Ming Zheng, research chemist at the National Institute of Standards and Technology in Gaithersburg, Maryland, also co-authored the research.

Over the last two years, Wang’s NSF-funded biochemical research has also focused on developing DNA-based origami nanostructures for cancer-fighting drug delivery and as probes to identify microRNA for use as molecular biomarkers for early diagnosis of cancers and other diseases. The NSF has funded her work on the development of self-assembled DNA nanostructures to fabricate a new generation of molecular electronic circuits for the miniaturization of computers and other electronic devices.