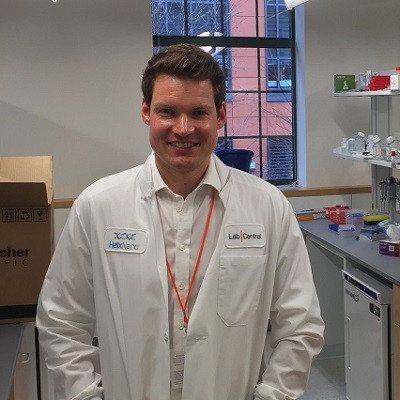 Here's explained how Hannu Rajaniemi, co-founder, and CEO at Helix Nanotechnologies, pivoted his business from working to build a cancer vaccine to inventing a vaccine against SARS-CoV-2, the virus that causes Covid-19.

For 42-year-old Hannu Rajaniemi, the decision to shift his synthetic biology start-up’s focus from creating cancer therapeutics to making a Covid-19 vaccine brought a sense of calm. Because watching coronavirus infect the world and not being part of the solution caused the scientist more torment than the complicated task of creating a vaccine in the middle of a pandemic.

“Before March the 10th, before we decided to jump on this, I was definitely feeling very anxious — very, very worried about what was coming,” Rajaniemi tells CNBC Make It. “This is of course before things started to get really bad, but yeah there was some sense of powerlessness and worry that was in the background. “Once we jumped on [creating a vaccine] that actually went away.”

On that day, Rajaniemi was speaking in New Brunswick, New Jersey at a large biopharma company about the future of the industry. The company, which Rajaniemi declined to name, has a robust Covid-19 response program, and being there got Rajaniemi thinking his company’s research could be applicable to fighting the virus.

So from March 10 through March 16, Rajaniemi pivoted his Cambridge, Massachusetts-headquartered business, Helix Nanotechnologies, from working to build a cancer vaccine to inventing a vaccine against SARS-CoV-2, the virus that causes Covid-19.

Within a week, “we had a significant amount of funds committed [to fund the Covid-19 vaccine research], we had a plan and we essentially completely shifted focus,” Rajaniemi tells CNBC Make It.

Getting investors and employees on board

The week it took for Helix Nano to shift gears “was pretty intense,” Rajaniemi tells CNBC Make It. He didn’t track his hours, but Rajaniemi remembers working through the night at least once. Helix Nano was able to raise money from its “extremely supportive” investors for the pivot in about about 24 hours, he says.

Since the biotechnology Helix Nano was working on was flexible enough to also work for viruses, “we were able to articulate an accelerated path to the company’s original mission — push the technology forward rapidly while fighting the pandemic, then bring it back to cancer,” he said. According to Rajaniemi, one investor said the Covid-19 pandemic “could be THE opportunity you needed” to show what the team can really accomplish.

As for his six employees, Rajaniemi inspired them to get behind the change by focusing on the broader benefit to society that a Covid-19 vaccine could provide. (Covid-19 is “rapidly becoming America’s leading cause of death,” according to The Washington Post — from April 6 to April 12, for example, more people died from Covid-19 than cancer.)

“This is not a side project, or a way to get some extra money from investors in a crisis: This is the mission,” Rajaniemi says he told his staff. “It might be the most important thing any of us ever do.”

And it is “quite empowering” to be working on something that could help the world, Rajaniemi says. “There is this strong sense of clarity.... This is what we have to focus on. And so I think that’s actually made it easier.”

Pivoting from cancer to Covid-19

Helix Nano’s technology made for a fairly easy pivot. Rajaniemi, who was born and raised in Finland, founded Helix Nanotechnologies in 2013 with small angel checks from friends and family as well as grants to focus on cancer therapeutics. And the business was personal: In 2015, Rajaniemi lost his 67-year-old mother to metastatic breast cancer.

From there, Helix Nano was accepted into Silicon Valley accelerator Y Combinator in 2017 and raised money from various sources including Starlight Ventures and the Data Collective.

Some of the work Helix Nano was doing toward a cancer drug had already been showing “very promising efficacy in human lung cancer tumors engrafted into mice” before the pandemic, says Rajaniemi. “We were about to start raising a Series A on that data. The next fundraise would have taken us just short of human clinical trials.”

The work centered around manipulating messenger ribonucleic acid (mRNA), or genetic code that acts as a messenger in the human body. Helix Nanotechnology’s strategy for generating a novel coronavirus vaccine also centers on mRNA.

The idea behind that cancer vaccine is the same as Helix Nano’s Covid-19 vaccine, except that the vaccine against SARS-CoV-2 goes after the virus instead of cancer cells, says Rajaniemi. The mRNA delivers a message to make parts of the novel coronavirus visible to the immune system.

Because mRNA is manipulated the same way, “regardless of the instructions it contains,” Helix Nanotechnologies had to change no infrastructure or hardware in its lab to transition from working on cancer therapeutics to a SARS-CoV-2 vaccine, Rajaniemi says.

Rajaniemi believes that the vaccine he and his team are creating is important because he says it is different from other novel coronavirus vaccines in the works. (There are more than 40 SARS-CoV-2 vaccines currently under development, according to vaccine consultant Stanley Plotkin, who invented the rubella vaccine in 1964.)

Rajaniemi explains vaccine technology with a metaphor: “A vaccine is like a mug shot that you show the immune system” by injecting it into the body. “So it’s a picture of the bad guy that the immune system goes after,” he says.

A potential problem, however, is that viruses mutate, which means a specific “mug shot” might no longer look like the mutated “bad guy” the immune system needs to fight.

So one of the approaches Helix Nano is pursuing “amounts to essentially showing so many mug shots from so many different angles that, no matter how the virus changes, it will be very hard for it to completely disguise itself [from] the immune system,” Rajaniemi says. The idea is akin to flooding the system with mugshots — a “saturation,” Rajaniemi calls it.

“While SARS-CoV-2 appears to be mutating more slowly than, say, influenza, we can’t discount the possibility that as the virus changes, the first wave of vaccines may lose efficacy,” he says.

“The approach we are developing should be robust against this, and may even provide protection from all future coronaviruses. So we want to help solve this problem once and for all, not just for this pandemic but future ones as well.”

Indeed, producing a vaccine that can identify and protect against multiple potential mutations of the virus “will be of critical importance,” says vaccine specialist Barbara Rath, the co-founder and chair of The Vienna Vaccine Safety Initiative.

“If we can, we’d like to end up with a vaccine that will protect us not only from one specific pandemic coronavirus, but from other variants of SARS-CoV, MERS-CoV, as well,” she says, referring to the coronaviruses that cause Severe Acute Respiratory Syndrome (SARS) and Middle East Respiratory Syndrome (MERS). “Whether or not this is possible ... is not yet entirely clear, but it is feasible,” Rath says.

A long road ahead to get a vaccine to market

On April 3, Helix Nanotechnologies injected its first novel coronavirus vaccines into mice to see if there is an immune response, and over the course of a few weeks it will be testing hundreds more vaccine designs by injecting them into mice.

In two to three months, its vaccines could be ready to move to clinical trials in humans, Rajaniemi says. That means the now familiar 12- to 18-month timeframe “is probably realistic” for getting a vaccine to market, Rajaniemi says (though he personally believes that can be accelerated).

The timeframe also depends on whether the Food and Drug Administration hastens its approval process for vaccines and how much manufacturing capacity there is to produce the vaccine. (Vaccine expert Plotkin says there is currently enough capacity to produce a vaccine for the United States, but not for the world population, though the Bill and Melinda Gates Foundation recently pledged to invest in manufacturing infrastructure.)

In the meantime, Rajaniemi, who as a theoretical physicist does not have to work in the lab, is in constant touch with his team in Cambridge while working six to seven days a week from his home in San Francisco, he says.

But then, he wasn’t expecting it to be easy. “It’s certainly been quite intense — it feels like we’ve jumped off a cliff and are building an airplane in mid-air,” Rajaniemi says.

Read the original article on CNBC.