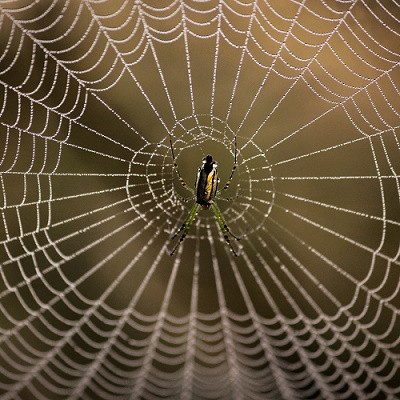 Researchers have patterned an antiadhesive nanostructure inspired by spider combs onto a foil surface, creating a handy tool to control sticky lab-made nanomaterials for medical, smart textiles, and other applications.

Cribellate spiders spin thousands of tiny nanofibers into sticky threads. To keep from getting caught in their own webs, these spiders use a nonstick comb on their back legs. Now, researchers reporting in ACS Applied Nano Materials have patterned an antiadhesive nanostructure inspired by this comb onto a foil surface, creating a handy tool to control sticky lab-made nanomaterials for medical, smart textile and other applications.

Unlike most spiders, which produce silk coated in a sticky glue, cribellate spiders’ threads resemble a bristly wool that embeds into the bodies of their prey. During web-making, the spider’s comb, or calamistrum, grabs onto the nanofibers emerging from its abdomen and assembles them into threads. Anna-Christin Joel and colleagues wondered why the sticky nanofibers don’t cling to the spider’s comb. They figured that the answer could reveal new strategies for handling synthetic nanomaterials and nanofibers, which can be tacky.

The researchers began by shaving off the calamistrum from a group of “lace weaver” spiders. In contrast to normal spiders, those lacking combs showed a buildup of nanofibers where the comb should have been. The team also observed that in normal spiders, the surface of the comb was covered with fingerprint-like nanoripples.

They found that this structure prevents nanofibers from closely contacting the surface of the spider’s leg in the region of the comb, reducing adhesive van der Waals forces. To make an artificial nonstick surface inspired by the spiders’ combs, the researchers used lasers to pattern similar nanostructures onto poly(ethylene terephthalate) (PET) foils and then coated the foils with gold. When tested for antiadhesive properties against spider silk, the artificial comb performed almost as well as the natural version.

The authors acknowledge funding from the European Union’s Horizon 2020 research and innovation program, the Excellence Initiative of the German federal and state governments and the Deutsche Forschungsgemainschaft.