Solaxess: Buildings Can Now Be both Solar-powered AND Aesthetically Pleasing 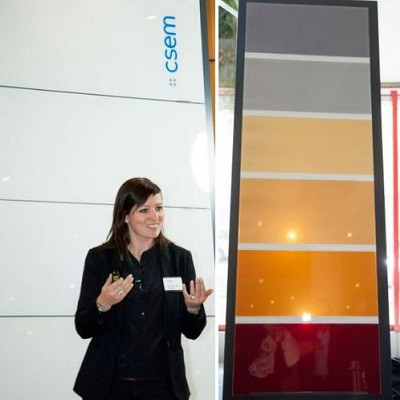 Solaxess, a Swiss company specializing in the high-tech solar sector, has succeeded in developing nanotechnology-enabled films that can be integrated into the manufacturing process of solar panels to scatter the whole visible spectrum while transmitting infrared light, giving the panels a colorful appearance; architects will no longer have to sacrifice the beauty of the buildings they design for the use of solar energy and the company thus puts an end to the ugly solar-powered buildings era!

Thanks to leading-edge nanotechnology, solar panel market has never been as thriving as it is today. From an aesthetic standpoint, classical photovoltaic panels do not satisfy customers due to their appearance, being in unattractive blue-black color. Therefore, it stands to reason that many architectures are reluctant to integrate them into their construction design.

A Swiss multinational company, headquartered in Neuchâtel, that manufactures and renders reflecting colored-film, Solaxess SA has inaugurated a novel step to deal with this issue by creating innovative colored-film aided by nanophotonic approaches. The company offers the manufacturers of photovoltaic modules various custom-made white films and colored films without visible cells or connections, helping them meet demands for individualized customized designs. This film is either applied on top of an existing module or integrated into a new module during assembly. The company’s products are introduced based on three patents granted by the Swiss Center for Electronics and Microtechnology (CSEM), which develops know-how and high-end equipment and processes for cell and module metrology and related characterizations, which are transferred to its industrial partners.

As a result, in order to win many customers, companies manufacturing solar panels are attracted to this nano-based technology to seem like aesthetical building designers. Not only does this development help companies fulfill their customer’s expectations, but also lengthens solar panels' lifetime by scattering unnecessary sun radiation wavelengths, or visible spectrum.

Although Solaxess’s modules are so attractive to building-integrated photovoltaics (BIPV) markets, they suffer from such limitations as the number of colors prepared and the brightness of the colors. As all know, nothing can be compared with the good visual appearance of a solar module, which acts as a magnet to attract more loyal customers. In this regard, customers’ reviews show that they have not been fully satisfied by a few colored-films offered by Solaxess, which are not shiny as much as they should be. Apart from Solaxess, many other research groups are struggling to supply a variety of colorful panels with more brightness to address this challenge, among which Kameleon Solar and the Netherlands organization for Applied Scientific Research (TNO) are the most active ones.