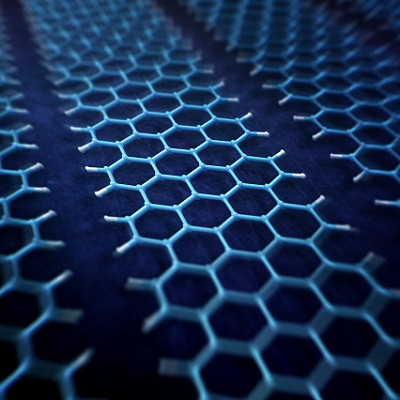 Graphene Nanoribbons might soon be much easier to produce. An international research team led by Martin Luther University Halle-Wittenberg (MLU), the University of Tennessee and Oak Ridge National Laboratory in the U.S. has succeeded in producing this versatile material for the first time directly on the surface of semiconductors. Until now, this was only possible on metal surfaces. The new approach also enables scientists to customise the properties of the nanoribbons. Storage technology is one of the potential applications of the material. The research team reports on its results in the current issue of "Science".

For years, graphene has been regarded as the material of the future. In simple terms, it is a two-dimensional carbon surface that resembles a honeycomb. This special structure gives the material distinctive properties: for example, it is extremely stable and ultra-light. There is a particular interest in graphene nanoribbons as they are a semiconductor material that could be used, for instance, in the electrical and computer industry. "This is why many research groups around the world are focusing their efforts on graphene nanoribbons," explains chemist Professor Konstantin Amsharov at MLU.

These ribbons, which are only nanometres in size, are made up of just a few carbon atoms wide. Their properties are determined by their shape and width. When graphene research was just beginning, the bands were produced by cutting up larger sections. "This process was very complicated and imprecise," says Amsharov.

He and colleagues from Germany, the U.S. and Poland, have now succeeded in simplifying the production of the coveted nanoribbons. The team produces the material by joining together individual atoms, which enables the properties to be customised. The researchers have succeeded for the first time in producing the ribbons on the surface of titanium oxide, a non-metallic material. "Until now, the ribbons were mainly synthesised on gold surfaces. This is not only comparatively expensive, but also impractical," explains Amsharov.

The problem with this approach is that gold conducts electricity. This would directly negate the properties of the graphene nanoribbons, which is why this method has only been used in basic research. However, the gold was needed as a catalyst to produce the nanoribbons in the first place. In addition, the nanoribbons had to be transferred from the gold surface to another surface - a very tricky undertaking. The new approach discovered by Amsharov and his colleagues solves this set of problems.

"Our new method allows us to have complete control over how the graphene nanoribbons are assembled. The process is technologically relevant as it could also be used at an industrial level. It is also more cost-effective than previous processes," says Amsharov, in summary. There are numerous areas of application for the nanoribbons: they could be used in future storage and semiconductor technology and they play a crucial role in the development of quantum computers.