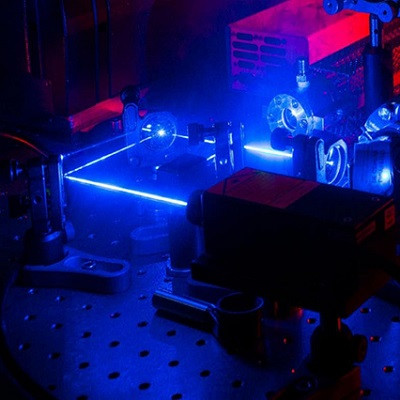 An international scientific team led by researchers at ITMO University demonstrated experimentally what it believes to be the world’s most compact semiconductor laser operating in the visible range at room temperature. The nanolaser produces green coherent light at room temperature. This light can be easily registered and even seen by the naked eye using a standard optical microscope. The research article was published in ACS Nano.

The researchers used halide perovskite as the material for their nanolaser. The perovskite provided two key elements — an active medium that allowed for the generation of coherent stimulated emission and an optical resonator that helped confine electromagnetic energy.

To generate laser radiation at room temperature, the scientists fabricated a cubic-shaped, 310-nm nanoparticle from the perovskite and photoexcited it with a femtosecond laser pulse. The nanoparticle’s design allowed for efficient confinement of the stimulated emission energy, so as to provide a high enough amplification of electromagnetic fields for laser generation.

“We used femtosecond laser pulses to pump the nanolasers,” researcher Ekaterina Tiguntseva said. “We irradiated isolated nanoparticles until we reached the threshold of laser generation at a specific pump intensity.” At that point, the nanoparticle began working like a typical laser, Tiguntseva said.

“The idea is that laser generation is a threshold process,” researcher Kirill Koshelev said. “You excite the nanoparticle with a laser pulse, and at a specific ‘threshold’ intensity of the external source, the particle starts to generate laser emission.”

If the light inside the laser is not adequately confined, there will be no laser emission, Koshelev said. “In the previous experiments with other materials and systems, but similar ideas, it was shown that you can use Mie resonances of the fourth order or fifth order, meaning resonances where the wavelength of light inside the material fits the resonator volume four or five times times at the frequency of laser generation.

“We’ve shown that our particle supports a Mie resonance of the third order, which has never been done before. In other words, we can produce a coherent stimulated emission at the conditions when the resonator size is equal to three wavelengths of light inside the material,” Koshelev said.

There is no need to apply external pressure or very low temperature for the nanoparticle to work as a laser. All the effects described in the research were produced at a regular atmospheric pressure and at room temperature. This could make the technology useful for creating optical chips, sensors, and other devices that use light to transfer and process information, including chips for optical computers.

The scientists said that the green portion of the visible spectrum has traditionally been considered problematic for nanolasers. “In the modern field of light-emitting semiconductors, there is the ‘green gap’ problem,” professor Sergey Makarov said. “The green gap means that the quantum efficiency of conventional semiconductor materials used for light-emitting diodes falls dramatically in the green part of the spectrum. This problem complicates the development of room temperature nanolasers made of conventional semiconductor materials.”

Lasers that work in the visible range are smaller than red and infrared (IR) sources with the same properties. The volume of a small laser typically has a cubic dependence on the emission’s wavelength, and as the wavelength of green light is three times less than that of IR light, the limit of miniaturization is much greater for green lasers. This, the researchers said, is essential for the production of ultracompact components for future optical computer systems.

Read the original article on Photonics.