Let’s Not Sacrifice Animals for Risk Assessment, at Least Not in Nanosafety Research! 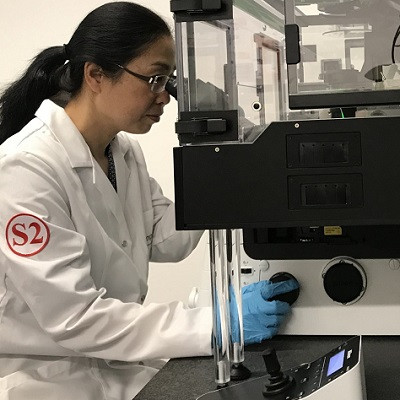 As the debate over animal rights and animal experiments continues to divide the scientific world, Empa scientists are seeking alternative methods for the risk analysis of nanoparticles. Although cell cultures or microorganisms have already begun to replace several animal experiments, these researchers combine test-tube experiments with mathematical simulations to reduce animal testing even further while still ensuring the safety of nanomaterials.

They are already in use in, say, cosmetics and the textile industry: Nanoparticles in sun blockers protect us from sunburn, and clothing with silver nanoparticles slows down bacterial growth. But the use of these tiny ingredients is also linked to the responsibility of being able to exclude negative effects for health and the environment. Nanoparticles belong to the still poorly characterized class of nanomaterials, which are between one and 100 nanometers in size and have a wide range of applications, for example in exhaust gas catalytic converters, wall paints, plastics and in nanomedicine. As new and unusual as nanomaterials are, it is still not clear whether or not they pose any risks to humans or the environment.

This is where risk analyses and life cycle assessments (LCA) come into play, which used to rely strongly on animal experiments when it came to determining the harmful effects of a new substance, including toxicity. Today, research is required to reduce and replace animal experiments wherever possible. Over the past 30 years, this approach has led to a substantial drop in animal testing, particularly in toxicological tests. The experience gained with conventional chemicals cannot simply be transferred to novel substances such as nanoparticles, however. Empa scientists are now developing new approaches, which should allow another substantial reduction in animal testing while at the same time enabling the safe use of nanomaterials.

"We are currently developing a new, integrative approach to analyze the risks of nanoparticles and to perform life cycle assessments," says Beatrice Salieri from Empa's Technology and Society lab in St. Gallen. One new feature, and one which differs from conventional analyses, is that, in addition to the mode of action of the substance under investigation, further data is included, such as the exposure and fate of a particle in the human body, so that a more holistic view is incorporated into the risk assessment.

These risk analyses are based on the nanoparticles' biochemical properties in order to develop suitable laboratory experiments, for example with cell cultures. To make sure the results from the test tube ("in vitro") also apply to the conditions in the human body ("in vivo"), the researchers use mathematical models ("in silico"), which, for instance, rely on the harmfulness of a reference substance. "If two substances, such as silver nanoparticles and silver ions, act in the very same way, the potential hazard of the nanoparticles can be calculated from that," says Salieri.

But for laboratory studies on nanoparticles to be conclusive, a suitable model system must first be developed for each type of nanoparticle. "Substances that are inhaled are examined in experiments with human lung cells," explains Empa researcher Peter Wick who is heading the "Particles-Biology Interactions" lab in St. Gallen. On the other hand, intestinal or liver cells are used to simulate digestion in the body.

This not only determines the damaging dose of a nanoparticle in cell culture experiments, but also includes all biochemical properties in the risk analysis, such as shape, size, transport patterns and the binding – if any – to other molecules. For example, free silver ions in a cell culture medium are about 100 times more toxic than silver nanoparticles bound to proteins. Such comprehensive laboratory analyses are incorporated into so-called kinetic models, which, instead of a snapshot of a situation in the test tube, can depict the complete process of particle action.

Finally, with the aid of complex algorithms, the expected biological phenomena can be calculated from these data. "Instead of 'mixing in' an animal experiment every now and then, we can determine the potential risks of nanoparticles on the basis of parallelisms with well-known substances, new data from lab analyses and mathematical models," says Empa researcher Mathias Rösslein. In future, this might also enable us to realistically represent the interactions between different nanoparticles in the human body as well as the characteristics of certain patient groups, such as elderly people or patients with several diseases, the scientist adds.

As a result of these novel risk analyses for nanoparticles, the researchers also hope to accelerate the development and market approval of new nanomaterials. They are already being applied in the "Safegraph" project, one of the projects in the EU's "Graphene Flagship" initiative, in which Empa is involved as a partner. Risk analyses and LCA for the new "wonder material" graphene are still scarce. Empa researchers have recently been able to demonstrate initial safety analyses of graphene and graphene related materials in fundamental in vitro studies. In this way, projects such as Safegraph can now better identify potential health risks and environmental consequences of graphene, while at the same time reducing the number of animal experiments.