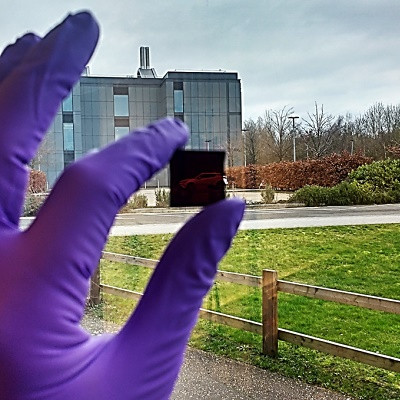 Researchers at Cambridge, Imperial and Singapore have developed a method to print ultrathin coatings on next-generation solar cells, allowing them to work in tandem with silicon solar cells to boost efficiencies.

Photovoltaics, or solar cells, work by absorbing sunlight to produce clean electricity. But photovoltaics can absorb only a fraction of the solar spectrum, which limits their efficiencies. The typical efficiency of a solar panel is only 18-20%.

Researchers have been searching for a way to overcome this efficiency limit with an approach that is cost-effective and can be used across the world. Recently, researchers have started developing ‘tandem’ solar cells by stacking two solar cells, absorbing complementary parts of the solar spectrum, on top of each other. The most promising of these tandem solar cells is a perovskite device stacked on a silicon device.

Almost all commercial solar cells are made from silicon, but halide perovskites are a new type of material that have quickly achieved efficiencies comparable to silicon. Perovskites absorb visible light, whereas silicon absorbs near-infrared light: a perovskite-silicon tandem solar cell could realistically achieve 35% efficiency within the next decade.

A team of researchers from Cambridge’s Department of Materials Science and Metallurgy led by Professor Judith Driscoll and Dr Robert Hoye, working with Imperial College London and the Solar Energy Research Institute of Singapore, have developed a method to ‘print’ a protective coating of copper oxide over the perovskite device. They have shown that only a 3-nanometre thick coating is sufficient to prevent any damage to the perovskite after depositing the transparent top electrode. These devices reach 24.4% efficiency in tandem with a silicon cell. Their results are reported in the journal ACS Energy Letters.

Key to success is the ability of their oxide growth method to replicate the quality of precise, vacuum-based techniques, but in open air and much faster. This minimises any damage to the perovskite when coating it with the oxide, while ensuring that the oxide grown has high density, such than only a very thin layer is needed to completely protect the perovskite. This vapour-based ‘oxide printer’ has the potential to be scaled up to commercial standards.