A Urine Test for Screening Lung Cancer by Harvard and MIT 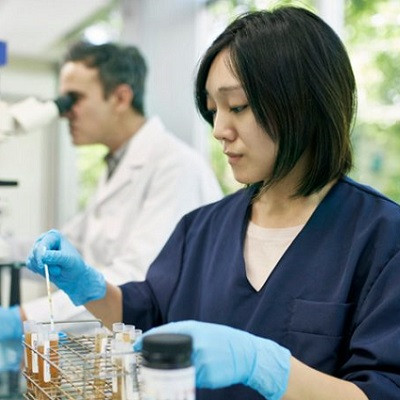 Harvard and MIT researchers teamed up to develop a novel screening test that could identify lung cancer a lot earlier and easier than current methods. The test detects lung cancer using nanoprobes, which send out reporter molecules that are picked up on urine analysis. This breakthrough, which is more sensitive than CT and delivers on a proof-of-concept experiment originally proposed in 2017, was recently detailed in a study published in Science Translational Medicine.

“What if you had a detector that was so small that it could circulate in your body, find the tumor all by itself, and send a signal to the outside world?” asked lead author Sangeeta Bhatia, MD, PhD, at a 2016 TED Talk. “It sounds a little like science fiction. But actually, nanotechnology allows us to do just that.”

For the current study, the researchers genetically engineered mice to form lung tumors akin to those seen in humans. Then they administered the nanoprobes directly into the lungs. (The researchers anticipate that humans would be able to inhale the nanoparticles.) When the nanoprobes neared certain types of lung tumors, they released reporter molecules. These molecules then circulated into the blood and were filtered by the kidneys into the urine. Subsequent urine analysis showed that cancers were detected with high specificity and sensitivity.

To detect tumors, the nanoprobes hunt for cancer-related proteases. Protease activity is dysregulated in cancer, with proteases involved directly in tumorigenesis. The researchers engineered the nanosensors by analyzing human lung adenocarcinoma datasets to propose candidate proteases. These proteases were screened in vitro by comparison with a panel of peptide substrates. The team then delivered nanosensors carrying these substrates to mice lungs.

In the lungs, the activity-based nanosensors were able to detect dysregulated proteases and then release reporter molecules to enable a urinary readout of disease activity.

The nontoxic nanoprobes picked up tumors that were 50 times smaller than other screening methods, and had 100% specificity and 81% sensitivity in detecting localized lung disease. Furthermore, in an alternative autochthonous murine model of lung adenocarcinoma, the screening test exhibited 100% specificity and 95% sensitivity, without being confounded by lung inflammation.

US guidelines suggest screening for patients at high risk for lung cancer using low-dose computed tomography (LDCT). However, LDCT has certain limitations, including a high rate of false positives. No false positives were noted with the nanoprobe screening approach.

“Activity-based nanosensors may have clinical utility as a rapid, safe, and cost-effective follow-up to LDCT, reducing the number of patients referred for invasive testing,” the researchers concluded. “With further optimization and validation studies, activity-based nanosensors may one day provide an accurate, noninvasive, and radiation-free strategy for lung cancer testing.”

Looking forward, Dr. Bhatia and colleagues are attempting to repackage the nanoprobes as a powder that can be inhaled via nebulizer. This advance would open the door to clinical trials for lung cancer screening.

Read the original article on MDLinx.