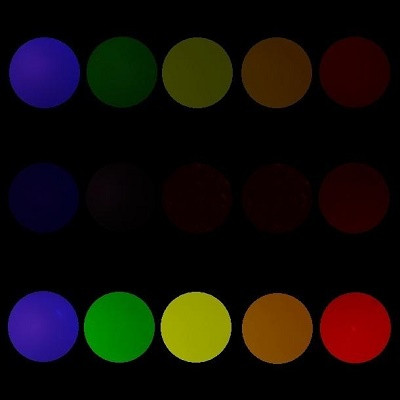 The discovery of green fluorescent protein (GFP), which is made by a jellyfish, transformed cell biology. It allowed scientists to stitch the GFP sequence to proteins from other organisms to trace their movements and interactions in living cells. Now, researchers have designed peptide nanoparticles that can each glow in a variety of colors, opening the door for many new biomedical applications.

Scientists have tried to mimic the fluorescence of GFP in small molecules such as chromophore-containing polymers or fluorescent peptide nanostructures. Peptides, which are small pieces of proteins, are attractive because of their structural simplicity and biocompatibility.

However, previous fluorescent peptide nanomaterials glow in only one color, which limits their use. Yuefei Wang and colleagues wanted to make peptides that can fluoresce in a rainbow of colors.

The researchers designed 12 peptides that contained 1–3 copies of the amino acids phenylalanine, tyrosine, tryptophan or histidine, all of which are weakly fluorescent in the visible range. They added a hydrophobic ferrocene group to one end of the peptide, which caused multiple peptides to assemble into spherical fluorescent nanoparticles.

The ferrocene group also changed the emission properties, or colors, of the peptides. The researchers found that each peptide nanoparticle could glow in more than one color, and together, the 12-peptide palette encompassed all colors in the visible region of light. The peptide colors were photostable and showed no toxicity when added to human cells.

These results indicate that the peptide nanoprobes could be substituted for fluorescent proteins, such as GFP, in biomedical imaging, although the fluorescence quantum yield is not as high, the researchers say.