Nanotextured Aluminum as an Approach for Water-purifying, Anti-gravity Solar Modules 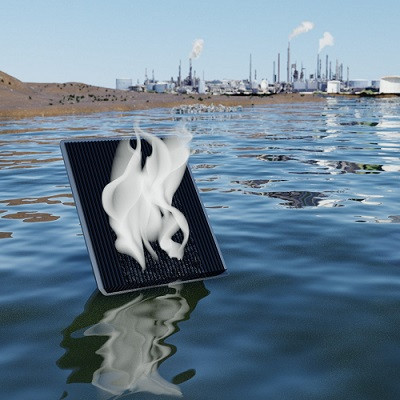 Researchers from the U.S. Army and the University of Rochester have joined forces to create a "super-wicking" anti-gravity aluminum panel that uses solar power to purify water.

Scientists from the University of Rochester and the U.S. Army have collaborated on a new solar water-purifying technology. The aluminum panel works against gravity by drawing water up through a microcapillary system, almost like a synthetic tree. From there, solar energy warms the water into evaporating steam, leaving impurities behind. The panel can be mounted at any angle to catch the most sun anywhere in the world.

In a new paper published in Nature Sustainability, the team of researchers describes existing design flaws in so-called “interfacial evaporation,” meaning technology that uses an intervening surface from which water evaporates and is purified. One major obstacle is that solar panels must be able to swivel toward the most complete exposure to sunlight, and another is that the “channels” water travels through for heating and evaporation get clogged. (Anyone who’s ever cleaned a showerhead or even seen a CLR commercial understands this problem.)

So what’s the solution? The scientists explain their revolutionary design:

“Here, we create a super-wicking and super-light-absorbing (SWSA) aluminium surface for efficient solar-based water sanitation. The device can be mounted at any angle on a floating platform to optimize incident solar irradiance and can readily be integrated with commercial solar-thermal systems. Given the open capillary channels, the device surface can be easily cleaned and reused. Using the SWSA surface to purify contaminated water, we show a decrease in the level of contaminants to well below the WHO and EPA standards for drinkable water.”

Aluminum isn’t especially light- or water-absorbing. But it’s cheap and plentiful, with low-cost availability in the kinds of markets where access to clean water is a public health bottleneck. For this solar purifier, the scientists treated aluminum sheeting using a treatment of femtosecond-long—a quadrillionth of a second—laser pulses. Think of etched glass or brushed steel, but for an aluminum surface nanotexture that can now absorb light as well as water.

Traveling military personnel have often had firsthand experience with the need for water purification; water is one of the heaviest things in the standard pack and must be replenished in large quantities that are, uh, returned to nature pretty quickly. Being able to gather and purify water in situ is a huge advantage. Soldiers have carried iodine purification tablets for decades, but that’s a solution in a pinch that’s used for one canteen at a time.

But the Army in particular also serves a role in advancing science for everyone. This research was sponsored partly by the U.S. Army Research Office (ARO), which sponsors more than 1,000 researchers around the country at any given time. The ARO's goals are ultimately to help ensure national security, it says, but it wants high-level ideas “with system applications often 20 [to] 30 years away.”

The next stop for a paper like this is, perhaps, to go directly to an Army facility for the beginnings of a real design. The researchers conclude:

“The demonstrated device has the potential to be used as part of the solution to the global water crisis due to its simplicity, durability, reusability, efficiency and compatibility with solar-thermal technology. [S]heets can be integrated with the already existing solar-panel tracking systems to increase their efficiencies.”