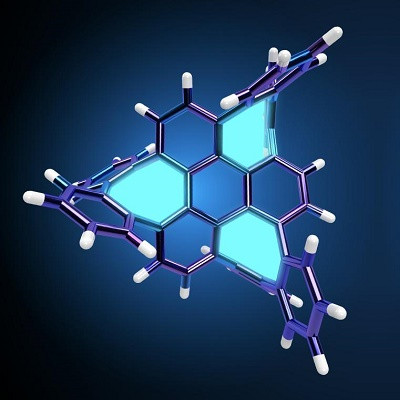 A team has developed a new method of synthesis for three-dimensional nanocarbons, utilizing a catalytic reaction to connect benzene rings and create an eight-membered ring structure. This represents a breakthrough in the synthesis of these nanocarbons, which are expected to be valuable next-generation functional materials.

A team of scientists led by Kenichiro Itami, Professor and Director of the Institute of Transformative Bio-Molecules (WPI-ITbM), has developed a new method for the synthesis of three-dimensional nanocarbons with the potential to advance materials science.

Nanocarbons, such as the fullerene (a sphere, recipient of the 1996 Nobel Prize), the carbon nanotube (a cylinder, discovered in 1991) and graphene (a sheet, recipient of the 2010 Nobel Prize) have attracted a great deal of attention as functional molecules with a variety of different properties. Since Mackay et al. put forward their theory in 1991, a variety of periodic three-dimensional nanocarbons have been proposed.

However, these have been extraordinarily difficult to synthesize. A particular challenge is the eight-membered ring structure, which appears periodically, necessitating an efficient method for its synthesis. To do so, Dr Itami's research team developed a new method for connecting polycyclic aromatic hydrocarbons using a palladium catalyst to produce eight-membered rings via cross-coupling, the first reaction of its type in the world.

The success of this research represents a revolutionary achievement in three-dimensional nanocarbon molecule synthesis. It is expected to lead to the discovery and elucidation of further novel properties and the development of next-generation functional materials.

Read the original article on ScienceDaily.