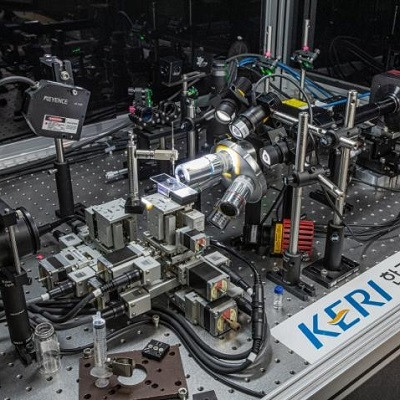 A Korean research team developed a super-high-resolution nano display using an innovative nanophotonic 3D printing technology. The 3D printed display devices successfully demonstrate for the first time the high-density integration of nanoscale pixels based on a 3D layout and could have important applications in augmented and virtual reality.

You don’t need to tell us that 3D printing is an incredibly versatile technology, but that doesn’t mean that we don’t love seeing new ways it’s being used. Recently, a research team from the Korea Electrotechnology Research Institute (KERI) made a breakthrough by producing a super-high-resolution nano display using an innovative nanophotonic 3D printing technology.

The research project, which was recently published in the journal ACS Nano, was led by Dr. Jaeyeon Pyo and Dr. Seung Kwon Seol from KERI’s Nano Hybrid Technology Center. In their work, the researchers developed a nanophotonic 3D printing approach which is capable of producing 3D pixels with nanoscale dimensions based on the 3D printing of quantum dots, tiny semiconductor particles with optical and electronic properties. When these dots are exposed to light or electricity, they emit light in various high-purity colors. This property, along with their high stability, have made quantum dots a popular material for producing televisions, smartphones, tablets and other displays.

Typically when working with quantum dots, the pixels are coated in a thin film to achieve dense integration. The more pixels that are packed into the display, the higher the image resolution. To achieve higher resolutions, R&D departments at various companies are attempting to decrease pixel size even more, but have up until now run into the challenge of maintaining light intensity as the pixels are scaled down.

The KERI team may have found a solution to this problem by using 3D printing to create pixels with a 3D structure that can be integrated without a thin film. They hypothesized that this approach could enable them to decrease the size of pixel without affecting the intensity of light emitted. Recently, the team demonstrated this theory by successfully 3D printing pixels with a lateral dimension of 620nm and height of 10,000nm. The 3D layout resulted in a two-fold increase in brightness with full colors compared to pixels with film structure.

Impressively, the pixel density (aka resolution) achieved by the KERI team was 5,600PPI (with three primary colors). This is significantly higher than most high resolution screens on the market, including that of an 8K QLED TV (100PPI), a laptop (200PPI) and smartphone (800PPI). In fact, the highest commercially available resolution display today is just 1,000PPI, less than five times what KERI’s team has achieved. The stunning breakthrough could thus be used in innovative ways, especially in areas where super high resolutions are needed, like virtual and augmented reality, beam projectors and more.

The nanophotonic 3D printing technology could also have applications in anti-forgery applications by creating super-high-resolution encryption patterns for 3D structure camera sensor bio technology, for example. Excitingly, the process is also capable of printing quantum dots onto flexible substrates made from Polyimide (PI) or Polyethylene terephthalate (PET). This means that displays could be produced on wearable or rollable devices.

“It is not easy to find cases of using 3D printing techniques to the display industry across the world,” commented Dr. Jaeyeon Pyo. “We took a different approach from previous 3D printing research, which was mostly relying on foreign tools and equipment. It can be considered as a complete technology independence to develop an ‘integrated solution’ from 3D printing materials to original technology and equipment.”