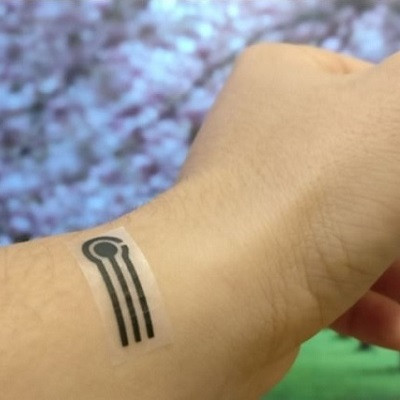 he skin-adherent sensor is an improved substitute for conventional sensors printed on plastic surfaces. It can be used for noninvasive detection and monitoring of body fluids present in sweat.

The study was led by Osvaldo Novais de Oliveira Junior and supported by FAPESP via the projects "Printed and implantable biosensors made from biopolymers for long-term monitoring", "Design and fabrication of nanostructured flexible devices for biomarker detection" and "Development of analytical tools based on electronic tongues for simultaneous detection of bacterial threats", as well as a Multiuser Equipment grant.

The article titled "Microbial nanocellulose adherent to human skin used in electrochemical sensors to detect metal ions and biomarkers in sweat" is published in the journal Talanta.

“Microbial nanocellulose is a 100% natural polymer. It is produced by bacteria from sugar. Its main advantage over plastic is its far better interface with human skin. It’s been commercially available for some years for use in wound dressings, among other applications, but it had never before been studied as an electrochemical sensor substrate,” said Robson Rosa da Silva, a co-first author of the article.

One of the problems with wearable sensors on plastic substrates is that perspiration forms a barrier between the skin and sensor, hindering detection and promoting allergies. "Nanocellulose is totally breathable, enabling sweat to reach the electrode's active layer," Silva said.

The sensor is a small adhesive rectangle 1.5 cm in length by 0.5 cm in width and is as thin as a sheet of tissue paper. It can detect a range of biomarkers, such as sodium, potassium, uric acid, lactic acid, and glucose, among others. "These elements or substances circulate in the bloodstream and are also detectable in sweat. Therefore, diabetes monitoring is one possible application of the nanocellulose sensor. Another is hormone control in women via detection of the hormone estradiol," Silva said.

The device can also be used to detect the presence of atmospheric pollutants in organisms. "As proof of concept, we exposed the sensor to low levels of toxic metals such as lead and cadmium, and the result was positive," he said.

The detection units are printed on the microbial nanocellulose substrate using a semiautomatic screen printer and a paste with a high concentration of carbon particles. Carbon is preferred owing to its significant electrical conductivity. "Chemical oxidation-reduction reactions produce an electrical signal that measures the concentration of the metabolite of interest," explained Paulo Augusto Raymundo Pereira, the other co-first author of the article.

"The sensor is connected to a potentiostat that makes electrochemical measurements by means of variations in the electric current. The data obtained are transmitted to a computer and converted into standard curves." According to Pereira, wireless communication between the sensor and a data measuring and reading device can easily be engineered.

The researchers are now studying the use of the sensor to administer drugs and are working on ways of making it commercially feasible. The first phase of the project "Fabrication of screen printed electrodes on biodegradable substrates (nanocellulose and onion films Allium cepa L.) for medical, food and agroindustrial applications", conducted by Biosmart Nanotechnology, was supported by FAPESP's Innovative Research in Small Business (PIPE) Program.