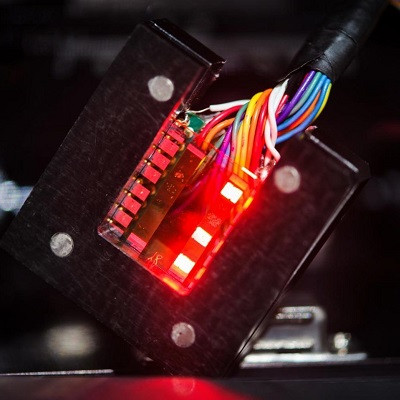 Princeton researchers have refined the manufacturing of light-emitting diodes made with crystalline structures known as perovskites, a more efficient and potentially lower-cost alternative to materials used in current LEDs.

Light-emitting diodes, or LEDs, are nearly ubiquitous in modern life, providing the brightness in phone displays, televisions, and lights. A new form of LEDs, made of a class of materials called halide perovskites, promises higher color quality and ease of manufacture, but has been known to fail when subjected to the kind of electrical current typically needed for practical uses. Now, Barry Rand, associate professor of electrical engineering and the Andlinger Center for Energy and the Environment at Princeton University, and a team of researchers have significantly improved the material’s stability and performance by better managing the heat generated by the LEDs.

The research, published in Advanced Materials, identifies several techniques that reduce the accumulation of heat within the material, which extended its lifetime tenfold. When the researchers prevented the device from overheating, they were able to pump enough current into it to produce light hundreds of times more intense than a typical cell phone display. The intensity, measured in watts per square meter, reflects the real amount of light coming from a device, uninfluenced by human eyes or the color of the light. Previously, such a level of current would have caused the LED to fail.

The advance establishes a new brightness record and expands the limits of what’s possible for the material by enhancing the well-established properties of perovskite LEDs and allowing those characteristics to be practically harnessed.

“It’s the first time we’ve shown that heat appears to be the major bottleneck for these materials operating at high currents,” said Rand. “This means the material could be used for bright lights and displays, which was never thought to be possible.”

Rand, who is also associate director for external partnerships at the Andlinger Center, said that clear pathways are now open for further development but cautioned that the technology is still 10 to 20 years from wide-scale commercial use.

To contain the accumulation of Joule heat within the device, or the type of heat that results from electrical current, the researchers methodically addressed key elements. They engineered the material’s composition in the device to make it more electrically conductive and, therefore, generate less heat during operation. They made the devices narrower than usual, about one tenth as thin as a strand of human hair, to enable better heat spreading. And, they added heat sinks, or components that conduct heat away from sensitive electrical components, which helped to disperse the heat.

Once these key elements were in place, they employed a tactic to continually “pulse” the device, or quickly turn it on and off, so fast that a human eye could not see the flicker, but enough time for the device to recover and cool. For this part of the work, they leveraged the expertise of coauthor Claire Gmachl, the Eugene Higgins Professor of Electrical Engineering. By reducing the amount of time the device was actually on, the researchers achieved efficiency improvements, and were able to operate the device longer than had ever been reported. Rand describes the work as a “how-to” guide for operating perovskite LEDs at the high power densities required for lighting and bright displays.

Lianfeng Zhao, first author on the paper and a postdoctoral research associate in the Department of Electrical Engineering, said the research counters the prevailing thought in the field that perovskites intrinsically could not operate efficiently at high power densities.

The work is an “important breakthrough” for the field, said Feng Gao, a professor in the Department of Physics, Chemistry and Biology at Linköping University in Sweden, and an expert in organic and perovskite semiconductors for energy technologies.

“Reducing Joule heating is a significant challenge for perovskite LEDs towards high brightness and long-term stability,” said Gao. “The results are really encouraging for the upcoming commercialization of lighting and displays based on perovskite materials.”

Until now, researchers had thought perovskite LEDs would be useful for producing only moderate levels of brightness, but not for lighting or ultra-bright displays on cell phones and laptop screens.

“We enhanced the scope of possible applications,” said Zhao.

One of the most appealing parts of perovskite LEDs is the way they are manufactured, which requires much less energy than producing conventional inorganic LEDs used for lighting today. Conventional LEDs are made from a piece of a single crystal, which is very difficult and expensive to produce and often requires ultrahigh vacuum systems and temperatures of more than 1000 degrees Celsius. Perovskite materials are typically made at temperatures below 100 degrees Celsius, and formed from solutions in a process similar to inkjet printing. If the technology were to be commercialized, it would likely result in a significant reduction in the energy required and carbon footprint of these electronics, both in their manufacture and operation.

Perovskite LEDs produce a pure, concentrated color, and the researchers also hope to use the material to build cheap, easy-to-make lasers. And more generally, Rand and Zhao said they will continue to study how the material operates to better understand its properties to make higher quality, durable, and efficient devices.

“This is a pretty major milestone,” said Rand. “It’s not only important to our research, but also for technologists, designers, and the electronics industry. We think there is a bright future for the material.”