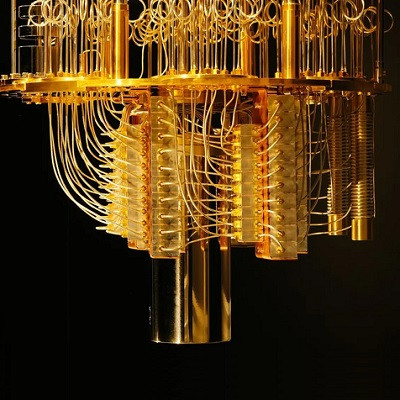 University of Sussex quantum physicists have developed an algorithm which helps early quantum computers to perform calculations most efficiently. The team used their model to calculate the expected computational power of early quantum computers. Their research highlights a fundamental advantage of the ‘trapped ion’ approach over other methods.

The Sussex team have shown how calculations in such a quantum computer can be done most efficiently, by using their new ‘routing algorithm’. Their paper “Efficient Qubit Routing for a Globally Connected Trapped Ion Quantum Computer” is published in the journal Advanced Quantum Technologies. 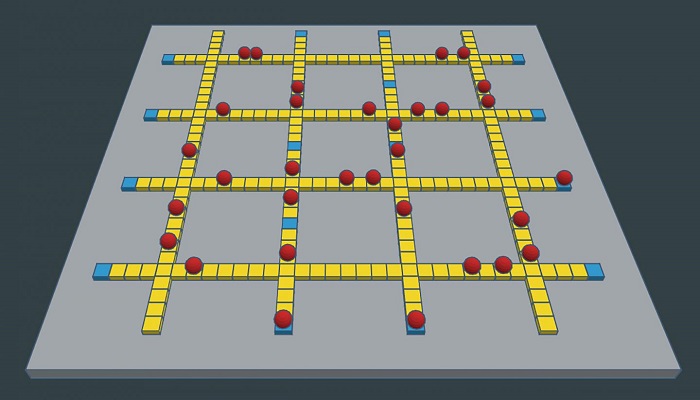 Visual depiction of the algorithm used to increase the computational power of early quantum computers.

The team working on this project was led by Professor Winfried Hensinger and included Mark Webber, Dr Steven Herbert and Dr Sebastian Weidt. The scientists have created a new algorithm which regulates traffic within the quantum computer just like managing traffic in a busy city. In the trapped ion design the qubits can be physically transported over long distances, so they can easily interact with other qubits. Their new algorithm means that data can flow through the quantum computer without any ‘traffic jams’. This in turn gives rise to a more powerful quantum computer.

Quantum computers are expected to be able to solve problems that are too complex for classical computers. Quantum computers use quantum bits (qubits) to process information in a new and powerful way. The particular quantum computer architecture the team analysed first is a ‘trapped ion’ quantum computer, consisting of silicon microchips with individual charged atoms, or ions, levitating above the surface of the chip. These ions are used to store data, where each ion holds one quantum bit of information. Executing calculations on such a quantum computer involves moving around ions, similar to playing a game of Pacman, and the faster and more efficiently the data (the ions) can be moved around, the more powerful the quantum computer will be.

In the global race to build a large scale quantum computer there are two leading methods, ‘superconducting’ devices which groups such as IBM and Google focus on, and ‘trapped ion’ devices which are used by the University of Sussex’s Ion Quantum Technology group, and the newly emerged company Universal Quantum, among others.

Superconducting quantum computers have stationary qubits which are typically only able to interact with qubits that are immediately next to each other. Calculations involving distant qubits are done by communicating through a chain of adjacent qubits, a process similar to the telephone game (also referred to as ‘Chinese Whispers’), where information is whispered from one person to another along a line of people. In the same way as in the telephone game, the information tends to get more corrupted the longer the chain is. Indeed, the researchers found that this process will limit the computational power of superconducting quantum computers.

In contrast, by deploying their new routing algorithm for their trapped ion architecture, the Sussex scientists have discovered that their quantum computing approach can achieve an impressive level of computational power.  ‘Quantum Volume’ is a new benchmark which is being used to compare the computational power of near term quantum computers. They were able to use Quantum Volume to compare their architecture against a model for superconducting qubits, where they assumed similar levels of errors for both approaches. They found that the trapped-ion approach performed consistently better than the superconducting qubit approach, because their routing algorithm essentially allows qubits to directly interact with many more qubits, which in turn gives rise to a higher expected computational power.

Mark Webber, a doctoral researcher in the Sussex Centre for Quantum technologies, at the University of Sussex, said:

“We can now predict the computational power of the quantum computers we are constructing. Our study indicates a fundamental advantage for trapped ion devices, and the new routing algorithm will allow us to maximize the performance of early quantum computers.”

Professor Hensinger, director of the Sussex Centre for Quantum Technologies at the University of Sussex said:

“Indeed, this work is yet another stepping stone towards building practical quantum computers that can solve real world problems.”

Professor Winfried Hensinger and Dr Sebastian Weidt have recently launched their spin-out company Universal Quantum which aims to build the world’s first large scale quantum computer. It has attracted backing from some of the world’s most powerful tech investors. The team was the first to publish a blue-print for how to build a large scale trapped ion quantum computer in 2017.